Jai Bhim Mandram is a voluntary organization working towards annihilation of caste in India. A campaign is being run since last year to end Manual Scavenging and as part of the campaign a Play would be staged on the 30th of June at Chennai.

People from various fields such as media, arts, literature and law work as volunteers in this organization. Jeyarani, journalist who is the Coordinator of the organization says “Focusing on dismantling the caste structure has become the vital need of the hour given that caste atrocities continue to take the lives of the marginalized and pose a huge challenge to humanism and human rights.” Jai Bhim Mandram works at different levels and in several forums to create awareness with regard to eradication of caste. The Slogan of the present campaign is #AnnihilateCaste  #EndManualScavengingNow . 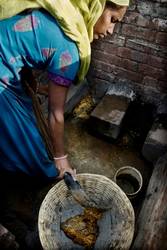 United Nations defines Manual scavenging as the practice of manually cleaning, carrying, disposing or handling in any manner, human excreta from dry latrines and sewers. It often involves using the most basic of tools such as buckets, brooms and baskets. Though the law says employment of manual scavenging is banned the practice is still widely followed. The Employment of Manual Scavenging and Construction of Dry Latrines (Prohibition) Act was passed in 1993. Further the Prohibition of Employment as Manual Scavengers and their Rehabilitation Act was promulgated in 2013.

Not much has changed after the passing of the laws. Manual scavenging, in practice, includes the following: 1) Cleaning of human excreta on the roadsides 2) Cleaning of sewage drains 3) Cleaning of dry latrines and 4) Cleaning of septic tanks. The health hazards of this occupation needs no explanation. There have been incidents of people losing their lives while cleaning the septic tanks due to the release of poisonous gases that are trapped in the tanks. Four men, three of them from the same family, died while cleaning a septic tank in a famous restaurant in Chennai and it was soon after this Jai Bhim Mandram was formed.

As part of the activities, a workshop was conducted for the children of manual scavengers. The aim of this workshop was to ensure that none of these youth grow up and take up the job of manual scavenging. Thirty four bright and cheerful people in the age group of 15 to 19 participated in the workshop.

During the inauguration, Jeyarani said that they hoped to create a support system for the youth to prevent them from ever taking up such work. She added that death that happens while septic tanks are cleaned was not an accident. It was a crime. A crime committed by the society against a group of marginalized people. A crime committed by a society that knew fully well how dangerous the job was. A crime committed by a society which expected people from a particular caste to clean its dirt. What the society does not realize is that by not recognizing the dignity of fellow human beings and by keeping a group of dispossessed people in a stinking hole, it is the society that is stinking and it is on us that the dirt is stuck. 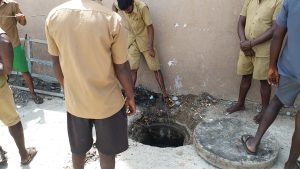 Often we find people talking about providing gloves and footwear to the Manual scavengers who are dedicated and doing ‘important’ work to keep ‘our’ cities clean. ‘Just imagine what would happen if they don’t clean,’ they say with pomposity and that we should help ‘them’. There is a distinct unawareness about how privilege operates – keeping us in a safe position and at the same time keeping a marginalized group constantly vulnerable. There is no understanding about how the caste system is the root of this evil. So does it mean that providing gloves is not important? It is required. It is timely. I am not denying that. But to say that they are dedicated and they go about doing the important work and to think that their needs are simple (“all they ask for is footwear and gloves and that they don’t want anything even for their families) is cruel, to say the least. Gloves and masks are nothing but putting a band aid on a festering wound that is becoming septic. The gloves would last hardly a week and they would not have the resources to buy more. There was one comment about how ‘they’ are used to the stench and don’t even want masks. The ‘othering’ is complete. If this is not the result of caste discrimination, then what is. The dedication we see is probably indifference and dissociation from the inhuman job that they are forced to do. If it is that exalted then why are we not doing it too?

But, did our Prime Minister not say that cleaning excreta is a spiritual experience? Bezwada Wilson of Safai Karamchari Andolan has a befitting answer:”A PM, for that matter any human being, should not talk like this. He must understand that there are people who are coming out and burning their baskets. It is a caste-based occupation imposed on us. It is violence on us. Some people said make him do manual scavenging to make him understand what it’s like. I said I don’t wish it even on Narendra Modi because it is so cruel. I don’t know if he is innocent or arrogant in making this statement but I don’t want to ask him.”

The system of caste is what is perpetuating this practice and millions of people from the marginalized group are facing the discrimination. Why are human beings made to work on this? Why are we not having adequate machinery and equipment to handle the waste? Why is everything available in theory but we continue to force our fellow beings to clean sewers and septic tanks with their bare hands? “Manual scavenging is not a career chosen voluntarily by workers, but is instead a deeply unhealthy, unsavoury and undignified job forced upon these people because of the stigma attached to their caste. The nature of the work itself then reinforces that stigma,” said Navi Pillay, UN High Commissioner for Human Rights. The International Dalit Solidarity Network which talks about caste discrimination practiced in countries says, People who have left manual scavenging, even those who had the support of community-based civil society initiatives, report significant barriers to accessing housing, employment, and support from existing government programs.

Jai Bhim Mandram’s campaign hopes to create awareness about the caste system and the degrading practice of manual scavenging. Their Media partners News 18 channel and Ananda vikatan are carrying programmes / articles to initiate conversation on this topic. A campaign is also being run in Facebook. The organization is staging a play ‘Manjal (Yellow)’ on the 30th of June at Kamaraj Arangam,Chennai. The play is produced by Neelam Productions of Paa.Ranjith, a film producer along with the modern theatre group ‘Kattiyakaari.’ It would be a hard hitting play on the harsh realities of manual scavenging. This play presents the actions that we need to take and also discusses the solutions to destroy the humiliating practice of collecting human excreta with hands. Nirmukta has been supporting the campaign and working with the people involved in whatever capacity that has been demanded. Bharathi Selva, Social worker who has put in hours of field work towards the cause of Jai Bhim Mandram says, “Each one of us are responsible for this squalid state of affairs. The play on 30th would definitely make us uncomfortable. But that hopefully would make us think about the abhorrent practice and ultimately bring about a change.”

So come watch the play. Feel Uncomfortable. Squirm in your seats. Feel ashamed. Go back with a heavy heart. Will that end Manual Scavenging tomorrow? Definitely not. Jai Bhim Mandram recognizes that there is still a long way to go. But this is a beginning. To chip at the system and then break it. See it for what it is. Do whatever is required to annihilate caste and end manual scavenging. To quote Bharathi Selva, who says passionately whenever I meet her, “Yet another death of this kind should never happen in this land.”