My daughter’s wedding date has been set for in mid-May this year. Being a man of rationalist disposition, I do not much believe in the customs and rituals of date setting that are normally observed in traditional weddings. However, after the fixture of the wedding date, the groom’s father was worried about a certain astrological point called Sukra asta, a period of around 74 days starting from the last day of April, 2016. It appears, as per astrological tradition, no auspicious ceremonies are to be performed during this period. Not aware of my rationalist leanings he expressed his concern on this issue during one of the conversations with me. 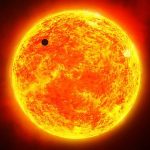 Out of curiosity I browsed the net for understanding the meaning of Shukra asta. The search revealed that, according to astrological texts, during certain part of the year some planets come very close to the Sun. As a result they lose their brightness or luster with respect to Sun. This is symbolic of a planet losing its strength. In astrology this is termed as combustion of a planet. Such an occurrence with regard to the planet Venus is called the Sukra asta, the combustion of Venus. The astrological interpretation drawn is that it would rob away the beneficial effects of the planet. As a philosopher, and that too a philosopher of science, I wanted to understand the meaning of this idea of strength of the planets. It turned out that it meant the intensity or brightness of its light. The planetary strengths or brightness symbolized certain good and bad effects on the human being. I was a bit intrigued by this because any planet does not have a light of its own. It only reflects the light of the Sun. So where is the question of its having a brightness of its own? Therefore,
to talk of the brightness of the planet being blunted because of its nearness to the Sun seems meaningless.

Peter Achinstein, a philosopher, has written a book titled ‘The Book of Evidence’. The book delineates the different conceptions of evidence, particularly with regard to the relationship that an experimental observation has to a scientific hypothesis. Whatever be the concept of evidence that Achinstein was trying to delineate, the whole of idea of evidence seemed to be lacking in such kind of stupid and obscurantist beliefs in astrology. Not only is the concept of evidence lacking but also the idea of meaning seems to be absent. What exactly does the strength of a planet mean as far as human beings are concerned is also not made clear. Meanings in such case have to be made clear in empirical terms, i.e. by deriving meaning from observational correlations.

Such analytical demands for meaning and evidence is usually met, as I was told in this particular context by the groom’s father, by appealing to something unquestionable called “tradition”. A judgement or a statement of belief is open to question only by appeal to reason and empirical things. But tradition is easily invoked as a shield whenever there is any move to get rid of age old beliefs like Sukra Asta that disregards the rational sensibilities of human beings. If such tradition is taken as a ground for belief, a ground where neither reason nor empirical thinking operates, then tradition gets connected to ignorance. Such ignorance is the root of all superstitions that are stubbornly held to be sacrosanct by the use of the term tradition. It is time that a society guided by such baseless tradition is abhorred. It is time that TV channels stop airing such nonsensical programs on astrology.

Tradition is something that is mostly construction of beliefs, which are handed down over a period of time in oral or written forms. Unfortunately, whatever is handed over never ever makes a remote reference to the rational or empirical components that played a part in the construction or origin of beliefs. This is the lacuna of tradition that a man clinging to such outdated and irrational notions fails to understand.