Delhi’s Jantar Mantar road is quite famous for being the epicenter of protests in India’s capital. This is where you find myriad protesters belonging to various walks of life protesting. These protests are very diverse in nature and represent/reflect the multitude of issues and non-issues(Hindu Sena for Donald Trump) that aam aadmi (common man) has to protest. On 10th of this month I had the opportunity to visit this place after stumbling upon an open event organised by “Patrakar Suraksha Kanoon Sanyukt Sangharsh Samiti” ( roughly translated to Journalists’ Protection Act Joint Struggle Committee). As a non-Delhite it was difficult for me to find the protest site among the many tents raised by various protesters. I strolled past them, carefully looking at the banners various protesters were holding and the issue they were raising. To my surprise, protest tents of multiple ideological groups were often situated beside each other. Protesters from each others tent willfully walk into the other tents and express their solidarity. Every tent had something to offer. Some wanted me to pick up their pamphlet which describes their agenda, others try to sell their books to ‘expose’ the conspiracy behind arresting their ‘godman’. All of which I graciously courteously refused.

After few calls and messages to my acquaintances in Delhi, I finally reached the protest site where the one I was searching was being held. The protest was outnumbered and was constantly interrupted by the blaring loudspeakers of the public meeting held by Jat leaders as a part of their efforts for claiming reservation. But the protesting journalists went on to speak undeterred. A delegation of journalists working in one of the conflict torn province of India i.e. Chattisgarh. The journalists and activists have been constantly hounded and targeted by the state government for their efforts to report news related to issues pertaining to people, environment and conflict. The state’s crackdown on the journalists is clearly visible on the number of attacks the state machinery made on these journos. False cases have been booked against these journos for their alleged ‘links’ and ‘sympathy’ to the Maoist guerrillas operating in that region. Multiple arrests and threats have been made by the police and security forces just for sending messages on WhatsApp. Legal aid groups  like JagLAG have been constantly hounded for providing legal support to the innocent tribals charged under draconian ‘counter-insurgency’ laws. 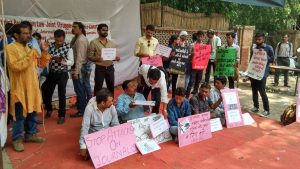 The amount of repression faced by these journalists is immense and is very difficult to condense in shot reports like this one. These days Killings, custodial torture, forced evictions and intimidation has been shamelessly common in Chattisgarh. As I spoke to one of the agitating journalist not only the state but the Maoist guerrillas and reactionary forces like Salwa Judum, Samajik Ekta Manch have been actively involved in suppressing the voices of journalists in the past and recent days. Journalists Nemichand Jain and Sai Reddy have been allegedly killed by the local Maoist guerrillas and numerous others threatened of consequences if they don’t stop reporting. “Anti-Maoist” vigilante groups like the Samajik Ekta Manch  have indulged in intimidating journalists like Malini Subramaniam working in the region.

Similar protests have been raised in the past  yielding almost zero results. The protesters represented their demands in a letter and presented a signed copy to the President of India. The draft talks about legal protection to the journalists working in the state and also expressed their desire to extend it various other states of the country. Last checked India ranked 133rd in the latest World Press Freedom Index released by Reporters Without Borders (View complete report here). The report clearly stated that “Journalists and bloggers are attacked and anathematized by various religious groups that are quick to take offence. At the same time, it is hard for journalists to cover regions such as Kashmir that are regarded as sensitive by the government. Prime Minister Narendra Modi seems indifferent to these threats and problems, and there is no mechanism for protecting journalists. Instead, in a desire to increase control of media coverage, Modi envisages opening a journalism university run by former propaganda ministry officials.”

It might seem futile to ask for a legislation from the very same oppressive state machinery, but an overwhelming support from the common populace of the country can actually make this happen. Draconian laws like Public Safety Act (PSA) and the Unlawful Activities (Prevention) Act have been constantly abused by the security forces in order to falsely frame the common folk, journalists and human rights activists. There are several national and International laws around the world which provide more or less protection to the journalists and specially to those working in conflict areas. Press Council of India,  a quasi-judicial authority – has demanded that a separate law be enacted for the safety of journalists across the country. The report made detailed visits to various Indian states and collected first hand reports from journalists. At the end of the report various suggestions were made by the panelists regarding the need of a separate act and various other remedies to the journalist community. You can access the complete report here. Media is touted to be the fourth pillar of democracy. The neutrality of this institution is open for debate and criticism, but it’s very foundation of operating in an atmosphere devoid of violent threats and intimidation cannot be negated. There have been quite a few ridiculous posts on the social media when India’s Press Freedom Rank was announced, citing that it’s “Freedom From Press” which is completely fine. This is a dangerous development in the recent times where hate against media is being slinged by jingoistic nationalists. Media as a whole is being projected as a ‘mercenary’ institution adding sexist remarks like ‘presstitutes’ by a prominent Minister in the Central cabinet.

Finally it’s the duty of the citizens to protect and safeguard free press from state’s repression. One of the most saddening observation of mine at the protest site is the absence of common folk and mainstream journalists of Delhi (as pointed out by one of the protesting journalist). It’s during these times the people need to express dissent and protest against the mindless hounding of state and non-state actors on the journalist community. It is the most targeted journos are the marginalised indigenous reporters who hail from regions of conflict, trying to make a difference in their respective regions by reporting long standing problems of land rights and acquisition, displacement, water, sanitation, environmental issues, malnutrition and education. If the defence of such reporting is overlooked then we might be forced into a collective amnesia by the state’s propaganda machinery. The current establishment led by Prime Minister Narendra Modi has been planning to start a university modeled on the infamous ‘Communication University of China’ to ‘train journalists’.  It also plans to monitor ‘blogs, comment, news sites’ which are critical of the government. We as a country are slowly moving towards a Orwellian utopia where we end up being fed news by the ‘Ministry of Truth’. It is the slogans of those courageous journalists which offered me respite of all the negativity. “Daman karoge, aur likhenge!” (Repress us, we will write more!).

How Bastar in Chhattisgarh is Turning into a Media Black Hole

How does international humanitarian law protect journalists in armed-conflict situations?

Even while debating “presstitute”, we ignore the sick misogyny and sexism behind it

India wants to train thousands of journalists in government propaganda, just like China

I'm a student of Political Science at University of Hyderabad.