With a possible huge announcement about gravitational waves right around the corner, we thought we’d take you through a (hypothetical) conversation between renowned experts in the field of gravitational physics and some smart and curious laymen and laywomen. On our star-studded panel, are experts from times long gone to those who are still active. At the centre of everyone’s attention lies that grey-haired soft-spoken genius, Albert Einstein, who keeps reminding people that they ought to pronounce his last name ‘Einshtein’ – he would very much like that.

The lucky people who get to talk to this pan-temporal panel of experts are randomly named Lillete, Iago, Gilbert and Olivia – you know, LIGO. In the spaceship of our imagination, let this discussion be moderated by Carl Sagan, a great astronomer by his own right. Let’s listen to their discussion.

Gilbert: If we look at this chronologically, obviously it all starts with the powerful idea of the inverse-square law force…

Sagan: It was one of the most beautiful equations ever written. Isaac, you wrote it.

Newton: Yes, I did. I was young then. What I realized is this – what if the different heavenly bodies attracted each other with just one force? The same force would keep us on the Earth, make the apple fall on someone’s head and would also be responsible for planetary motion. Of course, Tycho (Brahe) and Johannes (Kepler) helped a lot with their detailed observations. What I discovered wasn’t gravitation, oh no no no! I proposed that the phenomenon of gravitation was ubiquitous, everything was affected by it and I just wrote down an equation which might elegantly explain this.

Sagan: Ah, the inverse square law. Which says that the force of gravitation varies as the reciprocal of the square of the distances between the centre of masses of two bodies and is directly proportional to the products of their masses. 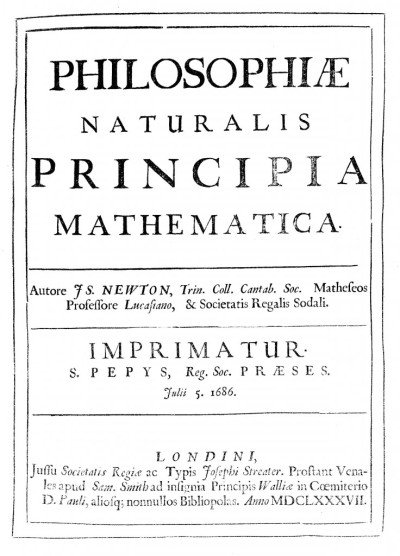 The cover of Principia by Newton. The language on the cover is Latin. (Courtesy: Wikimedia commons)

Newton: Yes. It seemed obvious. But I didn’t have the heart to publish it. I worked for months trying to fit Tycho’s data. I invented calculus to handle things more easily. I explained laws that Johannes had given. When all of the thousands of data points fit, only then did I put my ideas in the form of Principia.

Sagan: But of course!

Newton: You know, I didn’t use calculus to derive a single result in Principia, although I had used calculus to do it for fun. I just used geometrical arguments. The heavens must be bound by beautiful geometrical laws, a handiwork of the Creator’s creation and I was merely searching for that.

Iago: But you tried alchemy and nothing came of that…

Sagan: Okay, so moving on. I understand that there were several theories about the mechanism of the attraction. You just said ‘action-at-a-distance’. Others like Robert Hooke tried various other theories, like corpuscular theory.

Newton: Oh, don’t talk about Hooke. He merely wanted to copy my corpuscular theory of light. I heard that it was discredited and then it was again reborn in a different form. Some guy Albert helped the cause.

Sagan: One of the cleverest ever! He would refine your theory for generations. He is here with us, Prof. Einstein, hello and welcome.

Lillette: Sir, I’m a big fan of yours. I don’t quite understand what you did, but you’re an inspiration for every young person wanting to become a scientist.

Einstein: That’s great to hear! I hope you want to be a scientist.

Sagan: We were just speaking to Isaac and I was telling him how you turned his theory upside-down after it being the dominant theory for 250 years!

Einstein: Oh ha ha! No no, I didn’t do anything quite so drastic. You see, Isaac’s theory is so powerful that it is irreplaceable. If you want to launch a rocket, you use it. If you want to calculate the motion of planets, you use it. Well, almost all planets… that’s why I like Mercury so much! (slight wink) You see, I just gave a more complete geometric description of the force, a goal which was also on Isaac’s mind when he wrote down his theory. He didn’t have the advantage of the development of mathematics like I did. 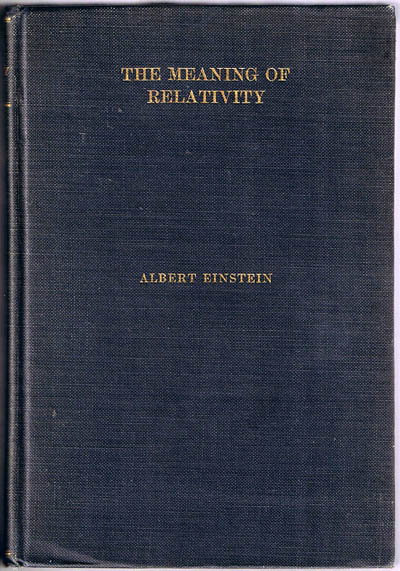 The cover of Einstein’s book, which is a compilation of lectures that he delivered at Princeton in 1921.

Newton: I have read a little about your theory after I time travelled to the present. You must explain more.

Einstein: You see Isaac, I treat all of space and time as a single mathematical entity, which can be described by a mathematical quantity called the metric. From a simple geometrical point of view, any smooth surface can be described by this geometrical quantity. Mathematicians call it a tensor. Using this, you can describe the curvature of any surface.

Now, imagine if space-time weren’t just a background, as in your theory Isaac. What if it is the very cause of gravitation?

Einstein: What I argued was that curvature in space-time is what gives rise to gravity. In a way, curvature is gravity.

Newton: But why would this space-time of yours curve? And that too in specific ways?

Einstein: Excellent question. Space-time would curve if there is matter in it. The presence of energy or mass would bend space-time, which, as I mentioned above, is the same as gravitational force. I was able to write down an equation, building on the great work done by exemplary mathematicians like Riemann and Ricci, in which I related the curvature of space-time to the matter density present there.

Newton: Wait, you said both energy and mass bends space-time. You said it like they were the same…

Newton: You stole my quote!

Sagan: Let’s return to the attraction of gravity! Olivia has a question.

Olivia: Yes, Prof. Einstein. Let’s say I take all that you’re saying as true. How would I verify it?

Eddington: Oh, I already did that for him!!

Sagan: Is that you, Arthur? Welcome, welcome! Do take a seat on the stage.

Einstein: Ah, my boy Arthur, how have you been?

Eddington: My dear Albert. Imagine an Englishman trying to verify a German Jew’s physics theory right after the First World War! Well, we did it Prof., we did it.

Einstein: Yes, my son. How the talk of politics and war pervades every one of our endeavours! Anyway, to answer your question, young lady, my theory predicts that light bends if there are massive objects in its path. Light follows the shortest path through space-time; someone thought of naming it ‘geodesic’. Now, when space-time bends due to massive bodies, the light follows the bent path and appears to bend as well. Space-time acts like a lens; remember lenses also bend light. And as with lenses, you would have spherical aberrations, so can space-time produce nice optical phenomena. Someone called these Einstein’s rings and/or Einstein’s crosses. How very embarrassing for me!

Sagan: Professor, you’ll be very happy to know that we’ve been using this technique called gravitational lensing a lot for different purposes. We’ve been able to trace out dark matter, but perhaps that’s for another day! For now, let me show you a few Einstein rings and crosses. Here is one which people fondly named the Cheshire Cat after the odd feline in Lewis Carroll’s book. 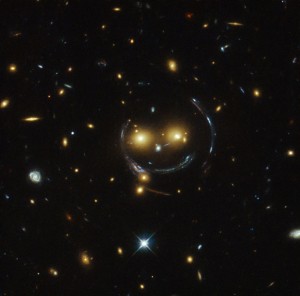 One of the ‘Einstein’s rings’ as seen by the Hubble Space Telescope. This is the galaxy cluster SDSS J1038+4849 — and it seems to be smiling. It is also known as the Cheshire Cat, because it looks a little like the smile stayed behind after the cat left. (Courtesy: NASA/ESA HST and Wikimedia Commons)

Eddington: Okay, so let me come to my experiment, which should answer Olivia’s question. Light coming from stars which are directly behind the Sun should bend while coming around the Sun to Earth. Prof. Einstein’s theory predicts a certain amount of bending and I wanted to see if the light rays did indeed bend that much. Of course, there’s a problem – you cannot see the starlight when the Sun is in front. It’s too bright, unless…

Olivia: Eclipse! Unless, you have a Total Solar Eclipse!

Eddington: Bravo! Yes, a solar eclipse! I got my chance in 1919 on 29th May. I travelled to the island to Principe – I wonder if anyone’s ever heard of that. Anyway, I went there and I observed a lot of stars, especially the well-known Kappa Tauri, a bright visual binary in the Taurus constellation. Let me show you my photograph. See those horizontal lines there? Those were my stars. 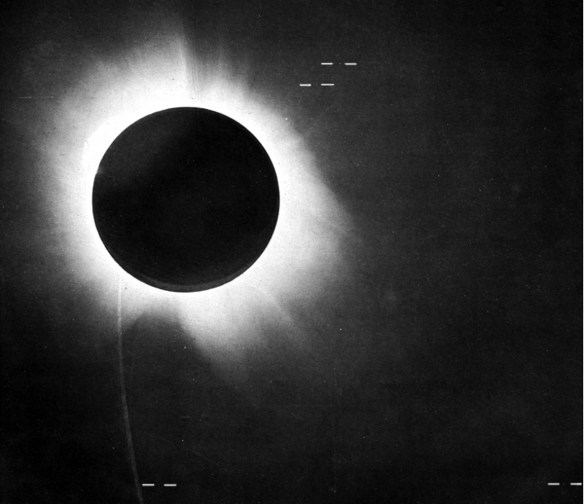 The photo that Eddington took during the Solar Eclipse experiment. The kappa Tauri stars he used for measurements are clearly visible and marked by Eddington with horizontal lines.

Sagan: The media covered it with great enthusiasm.

Eddington: Yes, I remember the British media hailing me as a national hero, and also mentioning Prof. Einstein, while never mentioning that he is German.

Einstein: Ha ha! But you know, Arthur, I had young people approach me on the streets and ask for autographs. I had people waving and cheering me on when I got out of my car at universities. And so many young ladies… well, those were the days.

Eddington: A young confident professor, hailed as the smartest man on the planet – what did you expect?

Newton: Can we come back to this bending of light business?

Gilbert: All of this is fine. But I don’t understand what this has to do with some waves we detected using some futuristic device. What are these gravitational waves? Are they like light waves?

Einstein: Yes and no. You see, light waves are produced by electromagnetic fields. My good friend James Clerk taught us that. We learnt more about fields. Energy can be carried from one point to another by waves; light simply carries energy. Similarly, this enormous space-time can also be treated as a field. A field, described not by a vector quantity like the electromagnetic field, but by a tensor. In 4-dimensions (three of space and one of time), a vector has four numbers which completely specify it; a tensor has 4×4=16 numbers. You can write such a vector or a tensor for every point in the field and these would obey certain laws and relations. Our theory should be able to describe these relations using mathematical equations. In my case, the metric tensor (remember Isaac?) would change in accordance to the presence of difference densities of matter. My theory should be able to predict that – and it does! No one’s been able to show any deviation from these predictions.

Sagan: Heavy stuff. But beautiful! To think that the billions and billions of stars and galaxies all dance according to the tune of these tensor equations!

Iago: So gravitational waves are merely methods to transport energy from one place to another as well?

Einstein: Yes, but not merely! You need it to conserve energy and momentum in a gravitational field. They have got to exist. But they are very faint.

Eddington: If only I were alive…

Gilbert: Since they are very faint, they are hard to detect. Right?

Huygens: You know, you can always use light!

Sagan: Ah, Christiaan! Welcome, welcome! However, for the time being, we’ll leave it here. Let’s take a break. When we come back, we shall focus on the excitement of gravitational waves and how we might use light to detect them. It’s more complicated than you think. Stay tuned for Part II.