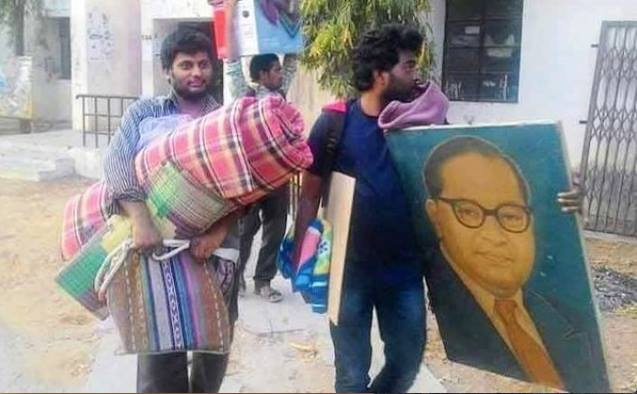 Numerous attempts have been made by people to derail the actual reasons of Rohith Vemula’s suicide and a recent article by Manu Joseph published in the Hindustan Times is deceptive on a whole new level. Although, the author has claimed his views as personal expression, the notion still needs to be debunked not just because it can be but also because a lot of people tend to overlook the veracity. The first flaw can be easily noticed in the title itself. As the title goes “Oppression or Depression”, the author has tried to draw a fine line between the terms ‘oppression’ and ‘depression’ ignoring the fact that both concepts actually sustain a cause-effect relationship.

People tend to understand a suicide by ascribing reasons. Usually, they tend to give an inordinate importance to the suicide note. The living are seldom believed when they explain themselves, but the dying are in their final hour.

The reason people, including forensic experts and psychologists take suicide notes to their utmost significance is because of its psychological credibility and truthfulness. Suicide notes provide information about the psychopathology of the suicide victim and there are a number of researches to support that. The presence of a suicide note is itself a blunt indication of the person’s emotional openness and mental state. Statements like “The living are seldom believed when…” sound wise and cocky but it doesn’t take much to understand that the living and ruling also possess the capability to counterfeit everything and anything, verbally and nonverbally.

But Vemula’s final letter has been ignored by those who are most moved by his death. In the note, the young man, who was not known to restrain his words, took pains to absolve everyone but himself for his action. As a result, his well-wishers had to find other reasons, reasons that make sense to them, powerful reasons, for his death. As Vemula had written in his final note, “The value of a man was reduced to his immediate identity.

The author quite naively tried to implant a seed of doubt when he presented Rohith’s friends, family and people who have known him for a long time, (some of whom are Dalit and are fully aware of their give and takes with this society) wrong and emotionally compromised by not being able to recognize his depression despite the fact that dalits are identified under the term ‘depressed classes’ for a reason. Quoting from Ratna. G. Revankar’s book, The Indian Constitution – Case Study of Backward Classes:

The term ‘depressed’ was intentionally used to relate Dalits with the series of jobs they were entitled to commit to, which as we know are considered utterly grim and insanitary by the society. I don’t think, in times like these there is still a need to explain why the suppressed ones and the oppressed ones are often the depressed ones.

A few months ago, when Deepika Padukone had revealed that she suffered from depression and suicidal tendencies, there appeared to be a consensus in the refined society that it was time we gave depression the respect of a severe disease and not the contempt we have for a character flaw. Can we extend the consideration to Vemula?

Yes, but could anyone go one more step further to recognize the origin of his depression? His loved ones have, but have you? There is no denying in the fact that clinical depression does not get the attention it needs in a society desecrated with stigma but it is worth to note that like every suicide has a cause, every depression has a cause or a source too. Depression doesn’t transpire suddenly in an individual it’s a gradual process and can always be attributed to a certain problem – be it, illness, family, money or abuse. When Ambedkar used the term “depressed classes” interchangeably with “dalits” in his book ‘Annihilation of Caste’, he developed a context of the oppressed minorities being the most despondent ones.

The author then indicated a little agreement when he wrote-

What if the reason for his death was a bit of both — what if he was depressed, and he was pushed to take the extreme step by the cultural cartel?

..And then he went on

But then the fact that thousands like him who face far worse do not end their lives, points to one dominant influence

Members of the Ambedkar Students Association (ASA) claim that as many as 12 students belonging to scheduled castes have ended their lives since the central university came into existence in the early 1970s, largely due to caste prejudices that many say are omnipresent.

How many more deaths, beatings, harassments and discriminations of dalits would it take to qualify for the reason of dalit suicides being nothing but the caste system itself or in the author’s words, the “cultural cartel”. According to a report by the American foundation of suicide prevention, Over 50 percent of all people who die by suicide suffer from major depression, but this doesn’t give one the right to exhibit the other 50% as some sort of a lesson. Depression is exclusive to a particular individual and is triggered by various aspects of that individual’s life.

Well-meaning activists who push the theory that Vemula killed himself because of discrimination convey the lethal message to thousands of clinically depressed young men and women in India that there is a sensible reason to end their lives. Such a transmission occurred in the hypothesis of ‘farmer suicides’, too.

I’ll say it again. How much does it take to ask the question “Why?”

The “lethal” message is not a suggestion the activists are making but a horrifying consequence which is out in the open for everyone to form their own opinions about. The sad part is only a handful of them use reason and logic to make it. A farmer commits suicide not because his fellow farmer did but because he is succumbed into depression and stress by the unpaid debts throwing him in the vicious circle of poverty. Suicide Ideation is not a choice by imitation but an outcome of the oppression. The “message” cannot be stopped; the cause very much needs to be.

Why don’t we let social science answer this?

David Émile Durkheim was a French sociologist, social psychologist and philosopher, who along with Karl Marx and Max Webber, is considered one of the prime architects of modern social science. In his book ‘Suicide’ (1987) he postulated four sub-types of suicide which categorizes various reasons that lead people to commit the act of killing themselves. The death of Rohith and other such people fall under the term ‘Fatalistic suicide’ which clearly means a suicide that occurs when a person is excessively regulated, when their futures are pitilessly blocked and passions violently choked by oppressive discipline. Fatalistic suicide served as a descriptor for suicides in traditional societies, because Durkheim was faced with the issue that even in societies with abundant social capital, individuals nevertheless killed themselves. In a similar way, the intentions of the Tibetan monks and the suicide bombers fall under the sub-type, ‘Altruistic suicide’- characterized by a sense of being overwhelmed by a group’s goals and beliefs. Durkheim’s theory of fatalistic suicide was supported by a research conducted at the Wayne State University which resulted in a strong correlation between oppression by a sense of totalitarianism and political overregulation and the rate of suicides.

One doesn’t need an in-depth knowledge of psychology to understand how indoctrination assists caste-abuse. It starts right from the moment when an upper caste-born child observes his elder advising him not to touch the cleaner while handing him the trash. Caste system is a brutal reality that needs to be confronted and not to be daubed with derailment. The article was nothing but a self-righteous admonishing of those who are braving against all odds to secure justice for Rohith and for the many Dalit and Bahujan students who have had to suffer institutional violence, emanating from a heady sense of entitlement that his caste affords. But what is more disconcerting is the fact that he is propped as a left-liberal of some sort, giving his article the unwarranted credibility.