It has been over a month since the book ‘Hatred in the Belly: Politics behind the Appropriation of Dr. Ambedkar’s Writings’ was released by the Shared Mirror Publishing House. It is the work of a collective of 38 contributors, consisting of artists, poets, writers, activists, academics and anti-caste groups (like Round Table India, Savari, Dalit Camera, etc.), called the Ambedkar Age Collective. By the end of the first week of its release, it was a bestseller on Amazon and there was already a waiting list for booked copies. If you moved among the social justice circles, secularist and the Left of the Indian social media, the build-up to the release was very hard to miss, something attested by the fact that on the day of the release the hashtag #HatredintheBelly was quite prominent. The book’s release, in short, was phenomenal.

Yet, the entire literary and academic clique of the country somehow missed all of it. As I said, it has been over a month, but not even a passing mention of the book has come anywhere on the English-language press. Not one review. Over the years, I have read reviews about some of the most obscure writers and newcomers in national newspapers, journals and news websites, but this book just did not make the cut. And this is precisely the ‘Hatred’ the book deals with. 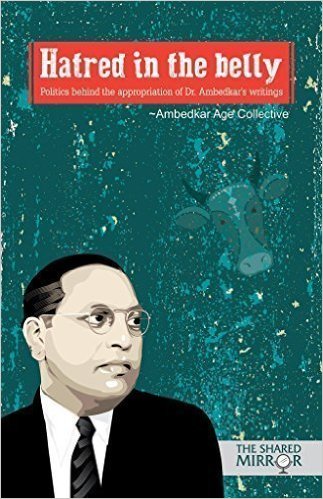 Amazon link for the Book

In the year 2014, the publishing house Navayana released the book ‘Annihilation of Caste: the Annotated Critical Edition’. What Navayana essentially did was to convert a 50 to 60 pages long Annihilation of Caste (AoC) by Dr. Ambedkar to 400+ pages long book, half of which was an “introduction” by Arundhati Roy titled the Doctor and the Saint. This sparked a very important debate on caste, hegemony and intellectual oppression. Hatred in the Belly captures the very essence of this debate. As it is mentioned in the preface of the book, to say that this book is in reaction to Navayana’s AoC is at best a gross misunderstanding. Navayana, Roy and Anand are, for the contributors in the book, merely illustrations of a deeper rot in the nation’s epistemic culture. And the provenance of this rot is in the defining structure of this great (virat, perhaps?) nation of ours: caste.

The above is a quote by one of the contributors, Naren Bedide (who goes by the name Kuffir/Kufr on the social media). The book offers us a powerful and hard-hitting insight of how caste operates in institutions and spaces that are ostensibly modern and progressive, and how the varnashrama dharma has replicated itself into a more sophisticated system to exclude the subaltern in the process and production of knowledge. It also illustrates, how colonising caste can be, especially when they “take the trouble to read Ambedkar” and yet continue to avoid engaging with Dalit and Bahujan experiences and narratives. Moreover, the book helps you to make sense of the reason why many Ambedkarites and anti-caste activists derisively – but very rightly might I add – refer to India’s premier institutions of higher learning as nothing more than Agraharmas (Brahmin ghettos).

The book’s title comes from a Telugu poem by Joopaka Subhadra, an English translation of which is featured in book. The title is faithful translation of the sentence kadupulo kasi, referring to the appropriated work of Ambedkar as a work that represents the hatefulness of Brahmanism. It is quite rare for a book to represent the politics it deals with in its content. The silence, the ignorance or possibly the avoidance of the Savarna academia signifies the very core of arguments presented in the book by its contributors.

An Example of Inclusiveness

The one thing that is quite refreshing about the book is the diversity, in the content as well as the contributors. We have people from all over India, from every major group imaginable, while expressing themselves in different languages. The prime editors of the book, Anu Ramdas and Naren Bedide, evidently went to great lengths to translate interviews and speeches to provide space to those who are usually relegated as “regional” (a derogation that very often works with the caste realities of the academia). This is significant considering the fact that non-Anglophone academics are often marginalised from national press, journals and publications of repute, simply because none of these institutions bother for translations. People who run academic publications in the country need a lesson or two from the people responsible for this book. The diversity stands testament to the fact that the Ambedkar Age Collective is dedicated to practice what they preach. If inclusiveness is what they demand from spaces of prominence and influence, it is precisely the kind of inclusiveness that they practice in their own spaces.

While this might be a little problematic to enunciate, but the one that I could relate to most was the article by Akshay Pathak, “The Judge, the Jury and the Goddess”. Much like Pathak, growing up in a Savarna household I found myself fascinated by Roy’s works and her polemics. It was difficult to escape the charm of her panache and the subversiveness of her words and actions. But unlike Pathak I wasn’t always the rebellious kind; in fact I was zealously Hindu and chastely loyal to my Nair identity. And yet, Roy’s books and her works inspired me to veer away from that past of mine, and there are plenty (if not way too many) of privileged caste Anglophones of my generation who have similar stories to tell. One fine day, Roy decided to write a 180 page introduction to a text that is the pivot of the modern anti-caste struggle and things changed for the worse. I can connect with the anguish and frustration that Pathak, and many like us, felt about the politics around the appropriation. But we need to start facing the fact that while Roy is problematic, so are we. A large part of the frustration, at least for me was coming to terms with the fact that I am part of the oppressive system and the oppressive class. It is not merely our privileges that we need acknowledge and check, but also the fact that we are often the ones we imagine to be fighting against.

The book, unlike most academic works, is more an effort to compile works that are already in the public domain. In doing so it attempts to consolidate solidarity and unite forces against Savarna hegemony. The publishing of the book augurs the emergence of the vanguard of the subaltern from among the subaltern, the lot that the Savarna academia has long ignored and are now dismissive of (since it became too hard to ignore) with such insults as “social media Dalits”. The deafening silence from the same hegemonic class surrounding the book proves that it has hit a very uncomfortable note among the Savarna academia. This book is a must read for anyone who wishes to understand hegemony in India and who believe that they are working or would like to work for the causes of social justice.