[TRIGGER WARNING for suicide and casteism]

In his dystopian novel 1984, the writer George Orwell described a new language being developed by the ruling regime of Oceania to control the thought and expression of its citizens. This language was called Newspeak, and was designed to limit freedom of thought and prevent potentially subversive concepts such as freedom, equality, democracy and peace from being utilized in articulating dissent. Accompanying this new language was a new thought process, Doublethink, which essentially involves accepting two contradictory ideas or notions about something without being aware of the inherent contradiction. Cognitive dissonance does not exist in Doublethink, and since the thinker will never be exposed to dissent through ordinary language due to the use of Newspeak, the combination of the two was expected to make it possible for the regime to control the thoughts of its intelligentsia without any direct intervention whatsoever.

Orwell’s work has never been more relevant than now. We live in truly bizarre times. The meanings of words have changed to such a degree that it is no longer possible to be completely sure what anyone means. The oppressors have become the oppressed, the victims have become the perpetrators, and the privileged have claimed the mantle of the downtrodden. Even in the face of the glaringly obvious, it has become possible for people to claim ignorance and to pick and choose what they wish to believe. Facts are now negotiable. Reason and empathy have ceded ground to irrational hatred and hypocrisy. We have no need for an organised regime to produce newspeak and doublethink for us. Both are coming into existence on their own through the machinery of modern media, as it gives voices to the most regressive and hateful of us.

Any keen observer of events would understand all this, if they were to put in the effort to understand what has happened in the past week. Rohith Vemula, a Dalit PhD scholar of Life Sciences at Hyderabad Central University, committed suicide after spending 15 days protesting in the open with four other Dalit students, all of whom had been denied the right to live in the university hostel. Under political pressure, the university administration had all five of them evicted from the hostel. This is the sequence of events that led up to the tragedy: 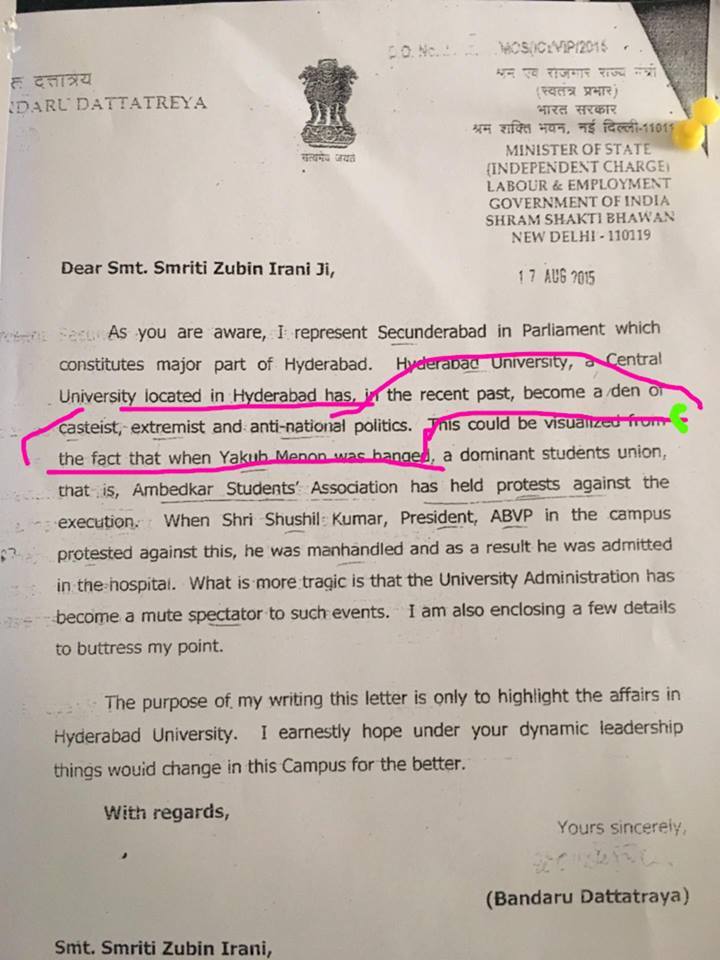 In spite of there being no evidence against the students, an amazing paper trail in the higher echelons of power continued to maintain that the students were violent anti-nationals. The words used by the Union minister for Labour and Employment, Bandaru Dattatreya, belie the newspeak that has now become prevalent in our time:

Casteism is now a new word that refers to those who mention the discrimination they face. To protest caste discrimination is to be a casteist. You are a casteist, if as a dalit you choose to highlight your plight. Merely mentioning the status accorded to you as a lower caste is now casteist, according to this new meaning. By calling yourself a dalit, you are now ‘polarizing the country and trying to divide it’.

More specifically, expressing opposition to the death penalty, something that every citizen is entitled to as a right to freedom of expression, is now an anti-national activity, especially if the penalty applies to a terrorist. The word anti-national, like seditionist and traitor, is now used not to describe activities that directly threaten the nation, but rather those that threaten a narrow-minded ideology of chauvinistic hatred. Words have changed meanings again, referring to completely new things.

These three examples are just the beginning of a new kind of language that is now widespread and very popular with the privileged and self-righteous patriots. Dissent and constructive criticism are now impossible without the accusation of being a seditionist, since the language to articulate that dissent has been effectively hijacked. In this we can identify Orwell’s idea of newspeak.

As if this wasn’t enough, the learned Hindu intellectuals of the internet did not spare any invectives for this innocent man. Many initially chose to call him a coward for committing suicide, a classic example of victim blaming that is so commonplace for a society that lacks any empathy for victims of depression. 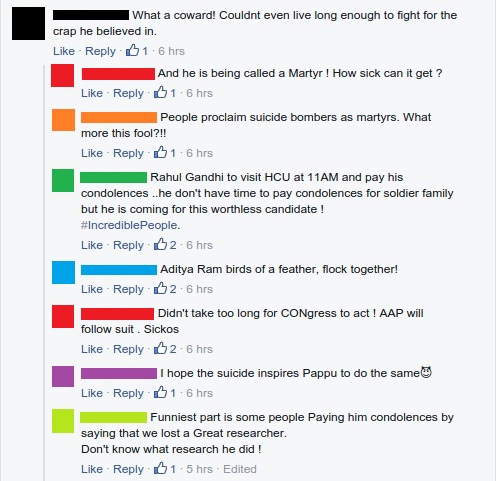 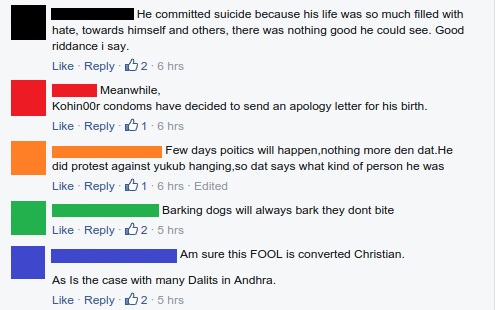 His critical views on Swami Vivekananda, who has been shown time and again to have held casteist views of his own, earned him unbelievably vicious abuse: 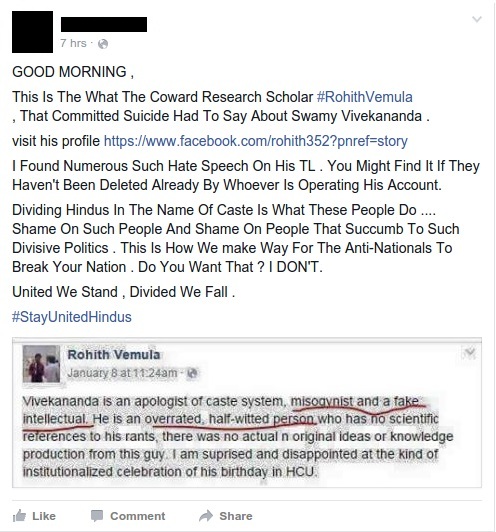 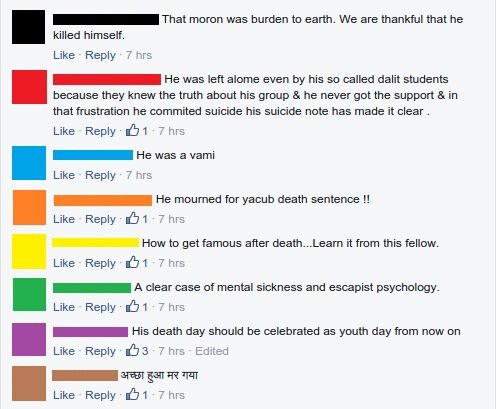 This intellectual believes Hindus treat Dalits as their own brethren. Now that they have raised their voice, they are one with the Jihadis…

His support for a Beef festival held on the UoH campus to celebrate the fact that beef is consumed by many in the lower castes earned him the righteous ire of the upper-caste vegetarians, who only care about the well-being of cows when a non-Hindu is found eating their meat. He was painted an anti-nationalist, a terrorist, a political freeloader trying to obtain ‘free food and lodging’ at the University. Never mind the fact that he was a meritorious recipient of the Junior Research Fellowship. None of this was important for the privileged dvija ‘merit’-worshippers who made this post (a debunking of their intentionally misleading article can be found here) that appeared soon afterwards: 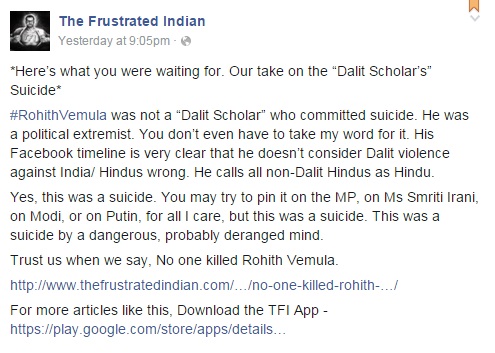 A standard argument at the tip of every savarna ignoramus’s tongue, as is evident from articles like this one, is the idea that a university is only a place for studying, and not for voicing ideas or critical political thinking. Students at universities should shut up and study. They shouldn’t be allowed to question the status quo and express their displeasure through non-violent protest. They should accept injustice meted out to them as some kind of twisted disciplining exercise, meant for their own benefit. In the eyes of these modern sanatanis, educational institutions are very much like the temples: bereft of anything but pure and slavish devotion, and exclusively meant for those with the right gunas. Most of all, they maintain vehemently that students should never question religion and country, the two now rapidly being venerated in much the same way.

Very soon, the internet right-wing went all out, publishing all kinds of patently false, obscurantist hand-wringing that condoled his death while using it as an opportunity to lie about Dalit activists, claiming yet again that they are out to ‘divide the country’. Some chose to completely ignore that this was undeniably a case of casteism in higher education, and maligned him for his opinions. After all, he spoke the language of dissent, and since it has all been hijacked, he was already an anti-national traitor. All that remained was for his life to be ruined by his suspension and push him over the edge. Even now as we speak, there are attempts to claim that he wasn’t even a dalit, another claim that demagogues have made based on whatever distortion they could attempt with the facts.

If there was any doubt in anyone’s mind as to whether casteism exists in 21st century India, it would be sheer doublethink to believe otherwise. Numerous documented cases of casteism and dalit student suicides in higher education are available for all to see. But doublethink is now second-nature to the vast majority of internet Hindus, who rant against caste reservation claiming it promotes casteism, which they are supposedly against, while reserving the most venomous hatred for dalit students who dare to raise their voice and say things they don’t agree with. This doublethink pairs well with the new casteist newspeak that is now in use everywhere, be it in politics, in the media, on the internet or in our everyday conversations.

As a science student myself, I am familiar with Carl Sagan’s writings and their capacity to profoundly inspire a generation of new scientists. Who can possibly be unmoved by his wonderful vision for humanity? I took it very personally then, when I watched the wretched of the internet pile the worst kind of abuse and spread the most blatant lies about a man who aspired to be able to some day write like Sagan. It has often been a complaint that the scientific fraternity does not raise it’s voice enough when required, that it hides in an ivory tower and detaches itself from the problems plaguing society. Rohith Vemula was not that kind of person, and he chose to take the values of scientific thinking and social justice seriously. No amount of slander, lies and abuse from internet Hindus will ever change that. It is my hope that some day we may actually begin to take Sagan seriously when he said

Every one of us is, in the cosmic perspective, precious. If a human disagrees with you, let him live. In a hundred billion galaxies, you will not find another.