Recently, a ‘roti’ making meme started doing the rounds on social media. The meme makers decided to highlight the difference between love and arranged marriage through a sexist prism. As is custom, it got a lot of attention for the wrong reasons. There was no denying that it was sexist. The premise of the meme was that in arranged marriages, the wives are better equipped in the kitchen and that their culinary skills somehow make them ideal partners. The reverse part of the meme was where one chooses their own partner, and ends up with really bad food on their plate. While this was obviously sexist, many shared it as “just a joke”. It was disappointing to see our own acquaintances share it knowingly or unknowingly.

As is Fememes’ MO, we made a quick rebuttal. The makers were criticised for judging a woman’s abilities only as a homemaker. Here’s our response: 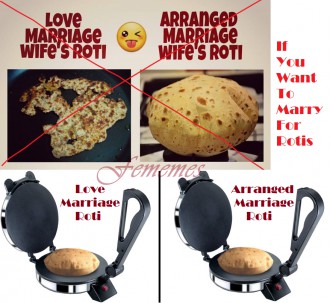 We made a quick rebuttal, because we were tired of the original meme appearing in our news feed. But the post just exploded on Facebook. As more and more people started sharing it, it was clear that we were not the only ones that felt that way when we saw the meme. It was heartening to see an overwhelming number of people calling out the blatant sexism. Here’s one of our favorite comments on the post:

Amidst the appreciations and accolade from like minded page subscribers, we also started seeing a barrage of anti-feminists whose primary line of defense was – You guessed it! – “It’s just a joke.”

Such individuals have a few common defenses to wish away feminist ideology:

“I am a woman and I think we don’t need feminism.”

“You all are just man haters. I pity your husband”

“Feminism is turning into a religion of male bashing”

“Feminists simply wish to drink and have sex with random strangers”

“You feminists do not speak about real issues. As if a roti joke is killing women of the world”

As a society, we teach our girls to wear frocks, grow their hair and be demure. We teach them to be subservient to males (fathers, uncles, brothers, husbands etc) We teach them to be apologetic about their bodies. We teach her to value her virginity over her mind.  She is made to feel shame when she is leached at. She is made to feel that it was somehow her fault. Did she not dress like a “good girl” should? Did she invite those stares? Was she too loud and boisterous? May be it is her fault that she got raped/groped?

We ask our boys to be a man!! By being a man we expect them to be violent and misogynistic. We want them to judge women by the aforementioned “qualities”. We teach them that a woman who swears by the tenets of patriarchy are honourable women. Every other woman was “asking for it” and “deserved to be disciplined”.

We take innocent kids and turn them into agents of patriarchy. This culture of misogyny, gender stereotypes, intolerance, victim blaming and slut shaming; this is our failure as a society.

“If they see breasts and long hair coming, they call it woman. If beard and whiskers they call it man. But look, the self that hovers in between Is neither man nor woman [Devara Dasimayya, 10th century]

So how does all this relate to the big picture? The idea is to explain why this kind of seemingly trivial sexist humour sets a dangerous precedent to gendered violence.

“There is nothing natural about the sexual division of labour…Only the actual process of pregnancy is biological, all the other work within the home that women must do can equally well be done by men…At the same time , once ‘women’s work’ is professionalized there is practically a monopoly on it by men. For instance, professional chefs are still largely men….The reason is clear- sexual division of labour ensures that women will always end up having to prioritize unpaid domestic work over paid work..The woman of the house is expected either to perform these tasks herself, or be responsible for ensuring that a low-paid poorer woman does it. This entire system functions on the assumption that women do housework for love” ~ Seeing like a feminist, Nivedita Menon

Why do we stereotype women as homemakers? In other words why do we indulge in “sexual division of labour” courtesy which women are always cast in a nurturing role. This attitude towards women holds true across socio-economic, linguistic and community lines in a country like ours. While the more educated women are expected to juggle their career and household responsibilities, the less educated women are expected to forever limit themselves to the roles assigned to them at birth. If a woman from the lower socio economic class leaves home to consider a career, she is often forced to reconcile to a similar job profile. She may be a sweeper, a maid, a cook, an ayah etc. We as a society ensure that the gender based roles remain unchallenged. A case in point being the recently launched website bookmybai.com. This website boasts of testimonials by women who are thankful to the site for having provided a trustworthy bai(maid). The cover photo of the site shows a smiling woman dressed in sari and the traditional sindoor, armed with an apron and a rolling pin. This site reiterates the societal mindset; cooking is a woman’s job but the woman who performs it is unimportant.

While we realise that many women may choose to be homemakers (and we respect that), we cannot help but wonder whether this is really a choice or just internalized misogyny whereby a woman herself believes that this is the role she is meant to fill.

While we fight an uphill battle against such patriarchal diktats, we will continue to get offended by such sexist memes. Sexist humor is not a joke, but is in fact a channel for misogynistic people to release their prejudices. This conduit connects them with people who validate them, and the women in question are doubly threatened. The shrapnel of sexist humor falls everywhere, bleeding into spaces that try and empower women as well.

“A good wife is one who serves her husband in the morning like a mother does, loves him in the day like a sister does and pleases him like a prostitute in the night.” Chanakya (source)

Sexism and sexist humour is based on the premise that women are a burden to their families. The girls parents get rid of their burden via the transaction known as marriage. Post marriage, women then become commodities/slaves who were acquired by the husband and his family. A patriarchal construct demands that a wife be the linchpin of the family. A wife who lives to serve her family. A wife who keeps her opinions to herself. A wife who dare not voice her opinions or challenge the supremacy of her husband. When such an inherently violent system is faced with dissent (real or perceived), the kneejerk reaction is to muzzle it, and the method of muzzling may vary, from benevolent sexism to full frontal attack.

For those who think that this is just a joke, here are some statistics.

“Over 40% of Indian women have experienced domestic violence at some point in their married lives, and nearly 55% think that spousal abuse is warranted in several circumstances, according to the newly-published findings of India’s third National Family Health Survey (NFHS-III). With regard to attitudes to domestic violence, the NFHS found that 41% of women thought that husbands were justified in slapping their wives if the latter showed disrespect to their in-laws. Meanwhile, a substantial 35% of women thought they deserved a brutal beating at the hands of their spouses if they neglected doing the household chores or looking after their children. Given this attitude towards domestic violence from the victims themselves, it is unsurprising that nearly 51% of the 75,000 Indian men surveyed think hitting or beating their wives is acceptable for certain reasons, particularly if she disrespects her in-laws. A smaller number think bad cooking or refusing sex are (sic.) reasons for physically assaulting their wives.” (source)

We live in a society where it is considered acceptable to physically assault a woman simply because she neglected to perform her household chores or because her cooking was bad. But we refuse to speak about it. We refuse to see that gender stereotyping, sexism and gendered violence are deeply interwoven. We think we are taking the moral high ground by not being offended by such trivial “jokes”. If we are to pride ourselves at not being offended by the offensive, then what integrity do we have? Righteous anger is a requirement of a morally sound individual, and not calling someone’s outright bigotry is as heinous as encouraging it.

IT IS NOT A JOKE
IT IS NOT FUNNY
AND WE WILL NOT CHILL.

In this digital age, memes are the in thing! We do believe that this generation will be termed the meme generation, and it won’t be very far from the truth. After all, they are catchy. They are perceived to be funny, and they catch on quick. Would we be far from the truth in presuming that our timelines are flooded by memes on various topics? Funny, sarcastic, and sometimes quite harmful ones too. We obviously do not mean physical harm, we mean the kind that insidiously makes light of serious social issues. Of all the gazillions of memes circulating the web, the most inconspicuously harmful are the bigoted ones. For example, the subtly sexist memes, even the benevolent ones.

It wasn’t long before a bunch of like minded friends came together and created an identity on social media called Fememes – I know, catchy right? 😉 – to respond to the obvious and not so obvious sexist memes that circulate the internet on a regular basis. The content is aplenty, but the theme is the same – SEXISM. We live in a time when the mere word “Feminism” makes people cringe at the thought of being associated with the term, and the movement. But what is feminism though? Only the belief in gender equality.

Fememes started picking these sexist and misogynistic memes out in order to counter them; in order to be the voice of the countless women at whom these memes are directed, discriminating against them, very subtly in the name of humour. It has been a phenomenal journey for us, together with our wonderful fans on the page. In fact, the road ahead looks well lit and beautiful. 🙂

You can visit our Facebook page for more awesome Fememes giving rebuttals to sexist memes on the internet. Our Twitter handle is pretty awesome too ;-). Stay Feminist and proud!