A lot has been said about Chris Gayle’s behaviour during an interview with a female TV presenter during the Big Bash League, just after his dismissal in a game. These are his words in question: “I wanted to come and have an interview with you as well. That’s the reason why I’m here, just to see your eyes for the first time. It’s nice so. Hopefully we can win this game and have a drink after. Don’t blush, baby.” He then goes on to answer the question put forth by the presenter.

Some have defended his remarks saying they were harmless flirtation. After all can’t a male cricketer, just back from playing a testosterone filled game of cricket, simply ask a pretty woman out? And if the TV presenter does not mind, why should we create a ruckus over such a trivial matter?

Others have criticized his behaviour as unprofessional and inappropriate. Yes, his comments are both these things, but there are also reasons why his behaviour goes beyond mere unprofessionalism. First let’s analyze the setting. Chris Gayle is being interviewed on public TV, and there is a certain code of conduct, decency of behaviour that has to be followed. This is not a social setting like a bar, a club or a post-match bash where such comments may be acceptable. In addition to this, when the presenter looks down, obviously feeling uncomfortable, Gayle adds ‘Don’t blush baby’, thus crossing the line of mere unprofessionalism to making personal comments about the TV presenter.

Gayle’s interview is only one incident and viewing women as eye-candy is a larger problem in cricket that needs to be addressed. Cricket is hardly a gender-equal place, with women often being a part of the sport only to be cheerleaders and often end up being sexualized in the process. As Sharda Ugra puts it in an article in The Hindu while talking of the IPL closer home:

“On Planet IPL this season, there are two broad categories of women on our screens. The first are the Respectables — the teamowners, the players’ wives/girlfriends, family members. Then there’s the other lot — the PlayThings. They are served up to the community of commentators in the SonyMax studio and on the field as occasional eye-candy and the source of much adolescent giggling and sniggering. The Playthings include the on-field cheerleaders, studio-dancers and the ‘colour’ girls — the two female reporters — chosen very deliberately not for their cricket nous but their youthful appearance. The young women change every few hours, the male ‘colour’ presenter/reporters endure.”

When the environment in sport is already so skewed against women professionals, such comments are not only crass but can also send a harmful message: No matter what they do, women are often seen as sexual objects first and serious professionals later. To understand this, consider how often female journalists have to field questions from interviewees who look at them as objects to be flirted with and asked out rather than as serious journalists. Think about the instances when comments are made about a woman’s appearance, when no such insight about her dress or looks is necessary in the discussion. It is easy to laugh off a male cricketer flirting with a female TV presenter, but it is also important to look at the power dynamics at work in such instances, to which I will come in a bit.

This and other such incidents where women are subjected to unwelcome advances have to be looked at in the larger context of sexism at the workplace and the deeply rooted prejudice against women which also spills over in their work environment. There is a systemic bias against working women at play here, which is not limited to sports journalism. Women doing their jobs have to constantly face men who only see them as people of the other gender, not as able and competent co-workers. Such advances, often unwanted and accompanied by remarks on one’s appearance, make a lot of women uncomfortable and subtly question their competency at work. And many a time, these advances if not called out or brought in check, extend into the realm of physical and verbal sexual harassment.

A very important idea to understand over here is the matrix of power. Sexual harassment at the workplace often takes place with a person higher up in power hierarchy being the perpetrator and a person in the lower ranks of the hierarchy being the victim. This power matrix presents special challenges to the victim. If she complains about the harassment, she may lose her job or professional reputation apart from the usual stigma that comes with being a victim of sexual harassment.

When incidents like the Gayle interview are being discussed, one has to consider the difference in stature and power of a prominent international cricketer and a reporter covering the match. If, in any such incident, a reporter finds the above comments unwelcome, the absence of any institutional mechanism to call them out would force her to maintain her silence and carry on with her work for fear of taking on a popular cricketer. Then there is the fear of being accused of not being professional enough, as according to social norms, sexual advances are supposed to be ignored and swept under the carpet. A very recent example is a viral post on facebook where a customer service representative is forced to deal with inane flirtatious comments which are clearly unwanted. Yet, the post glorifies the man who successfully makes the woman uncomfortable. 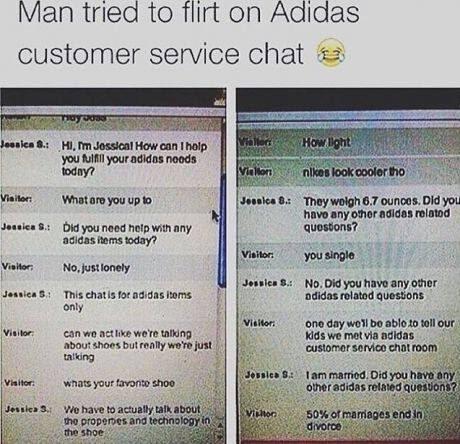 This matrix of power has also been elaborated in the Handbook of the ‘Sexual Harassment of Women at Workplace (Prevention, Prohibition and Redressal) Act, 2013’ for employers and organisations.

behaviours. ….It is the impact and not the intent that matters and it almost always occurs in a matrix of power.”

While talking of sexual harassment, this is what it says “Sexual harassment has its roots in patriarchy and its attendant perception that men are superior to women and that some forms of violence against women are acceptable. One of these is workplace sexual harassment, which views various forms of such harassment, as harmless and trivial. Often, it is excused as ‘natural’ male behaviour or ‘harmless flirtation’ which women enjoy. Contrary to these perceptions, it causes serious harm and is also a strong manifestation of sex discrimination at the workplace.”

What men may find harmless and normal, is often objectionable to women, as there is often a dearth of female representation and voice in such contexts. This understanding can also be seen in the following judgement: “Conduct that many men consider unobjectionable may offend many women… Men tend to view some forms of sexual harassment as “harmless social interactions to which only overly-sensitive women would object. The characteristically male view depicts sexual harassment as comparatively harmless amusement. … Men, who are rarely victims of sexual assault, may view sexual conduct in a vacuum without a full appreciation of the social setting or the underlying threat of violence that a woman may perceive.”

Gayle’s incident is neither the first, nor will it be the last. However, in all these incidents there is a familiar streak. One where organisations condone these actions, until pressurized from outside. Let’s not forget the infamous Lisa Olsen incident of 1990, when team members paraded naked in front of her and taunted her as she interviewed them. The reaction from the team manager of the Patriots captures the essence of sexism in sports. He called her a ‘classy bitch’. Others joked about the incident in a crass manner. And while the NFL imposed a fine, none of the players actually paid up. Olsen ended up getting death threats after she raised the issue, and had to relocate to the other side of the planet after a home invasion.

What makes people think such actions are normal for a workplace? It’s the reaction of society around them. Ignoring or condoning these actions makes them normative. The sexist stereotype that women give in to their superior’s advances, stems from condoning the actions of those in power. And the result, women are expected to put up with ‘harmless’ flirting to get ahead. Those who don’t conform, rarely get the job. And that’s still accepted by the majority of those holding power. One doesn’t need to look for examples elsewhere. Look at the reaction of two commentators immediately following the incident. “One of the most extraordinary things you’ll ever see on network television”. “Playing shots on and off the field”. Comments like these emerge when such incidents are normal. The voice of sanity is heard from the third commentator, who remarks on the behaviour as inappropriate. But the first two obviously condone Chris Gayle’s behaviour with an immature streak.

Unfortunately, like vultures, certain sections are using this incident to further their own racist ideologies. This is evident in the backlash that refuses to subside even after Gayle’s apology and fine. Last year, Tim Cahill, a prominent football player kissed Mel Mclaughlin on her cheek. Another clear case of sexual harassment, with none of the backlash. Those who use incidents to further their own racism also affect the cause of feminism.

Sexual harassment is just one of the many hurdles placed before women in sports. It’s part of a wider mentality, where women are expected to be subservient, and conform to the rules laid out by those in power.

Flirting or asking women out at the workplace, especially when there are power dynamics involved, with the person flirting in a position of power, is rarely innocuous and may affect the morale and productivity of female professionals and workers. It is for all these reasons that such instances have to been seen in a larger perspective of institutionalized prejudice against working women.

Author thanks baisakhi, lalit, anish and surya for their suggestions.