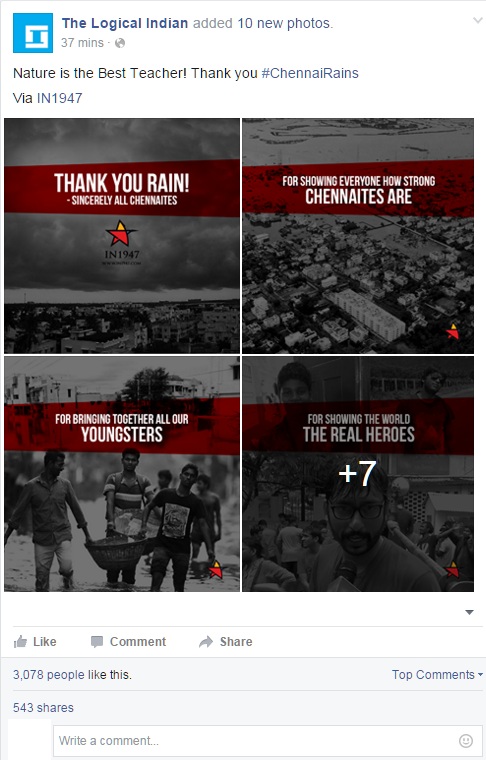 There are several pages sharing similar images, and there’s something disturbingly common among all the pages and people who are sharing them. They are known for their clickbaiting, and their posts betray hints of privilege, of their not being affected directly by calamity. It takes a certain amount of privilege to preach to someone else to eat the good part of a ruined cake. Or to see these as opportunities to clickbait. Only outsiders can afford to be inspired by a few stories because there is no negative side of the incident for them. In fact they can not only afford to, but want to listen to specifically the good side. No wonder I find correlation between people cribbing about “too much negativity in social media” and privilege denial. People can go to any extent to sweep the negativity under the carpet because in this age of social media there is no way to passively ignore suffering. Such information is somehow going to get to everyone’s news feeds. So there is a new need for active overlooking so as to be able to thrive as Nero’s guests.

The flooding that happened in Chennai was terrible. It costed more than 300 lives, displaced more than 18 lakh people and caused damages worth upwards of 20,000 crores. Wiki rightfully calls it a disaster! The affected areas are now actively fighting to recover from the calamity. It is a difficult task and will require strong grit. So summoning all the positivity needed to make this happen is a must. But literally thanking the rain for the incident – how does that make any sense? The calamity did really bring forward lots of inspiring stories. No doubt about that. But let us not trivialize the impact of the disaster in our zeal to look at the positive side. Would it be okay if somebody openly expressed thanks for Nirbhaya’s rape incident because that made India more active about women’s rights?

This attitude is motivated by the Jo hota hai ache ke liye hota hai (“Whatever happens, happens for the best”) thought-terminating-cliche which goes way beyond being a coping mechanism and turns into having a delusional worldview. Just like karma, appealing to just world bias causes real harm in the form of victim blaming; this hyper positivity results in undermining the suffering of the impacted. Just think about what message such posts send to the victims. They are being told that their suffering is a boon for others. That we literally thank the force that killed their dear ones. That we are happy to see them homeless so that a Muslim could provide temporary housing to a Hindu and be a token symbol of India’s unity in diversity. And with all this positivity there is no room to discuss the caste angle and it’s ugly head in calamity. There were reports of surveys from two charities indicating that government’s relief efforts neglected poor lower caste families. That there was exclusion and discrimination even for the disaster response. And all this when those people were the most affected in this whole incident.

I don’t want to deny that calamities can bring people together. But I sure as hell don’t want to focus on it as a point of celebration while the injured have not even started to heal. Quoting a friend who volunteered in on-grounds relief activity – “It is irritating to see them prematurely pat their backs while people are dying. And thanks to this premature celebration, many community kitchens have closed and there is less food to go around today than 3-4 days back”.

By the way this whole so-called optimism comes across as deeply cynical to me. The assumption that people can “forget their differences” only under extreme stress is deeply unsettling. How can we be proud of the humanism in these acts if only gross suffering motivates them? That is setting really low standards for humanity.

To be able to pick yourself up and get to work, especially post a bad event, is difficult. It needs hope and motivation. Optimism, the ability to look at the silver lining of a dark cloud, is important in such cases in order to offer that hope and motivation. Possibility of positive outcomes can be a good driving force. And optimism is not just about that. It can be a good coping mechanism. It helps diverting attention away from the current misfortune to more productive things. Excessive brooding over a sad situation does nobody any good.

Having said all of that there is such a thing as delusional optimism. The kind where people refuse to even acknowledge a tragedy for the irrational fear that its impact is somehow dependent on our thinking about it. Avoidance is one of the most unhealthy choices a person can make. Wishing bad things away never works. Such an approach is commonly rooted in nonsensical claims about how the universe works, e.g. The Secret. The thinking is that bad feelings attract bad events and good feelings attract good events. The problem is that this is not just a naive outlook of a few, but a significant amount of self-help literature peddles this shit. And it can be quite harmful. There is something deeply immoral about a person claiming that cancer is the patient’s fault, or tsunami victims asked for it. Such inane claims of existence of some secret law of attraction need to be ditched by a good dose of rationality.

There is another kind of avoidance, the “out of mind, out of existence” kind. Idea behind this is to suppress bad emotions and just fill oneself with good emotions. The problem is that the human brain doesn’t work that way. For instance, people often, with genuine kindness, offer the completely unhelpful advice of snapping out of clinical depression. The whole situation is akin to having a bunch of dead fish, but no one around you will acknowledge that the fish are dead. This belief in magical mind needs to be grounded in the realistic view i.e. the brain is just a biological organ, and feelings are a real mechanism of its operation. It isn’t limited to one’s own philosophy either. This RSAnimate captures it perfectly. Obsession with positivity, with seeing the silver lining, forcing people to fake a smile all the time and shaming people who complain by blaming their misery on their pessimism creates a very lonely world for them. People’s stress levels are infact enhanced if they are forced to suppress their “negative thoughts”, instead of dealing with them.

We, as a society, need to move away from this optimism excess. Voltaire got it right when he said “Optimism is the madness of insisting that all is well when we are miserable”. It is time we realize this, and we had better start calling a spade as a spade. Let us all adopt realism.

Sincere thanks to the co-editors – Lalit & Satya