There have been sporadic attempts in the Indian mainstream at using the trope of a man getting to look at the world from a woman’s point of view and realising how terrible it all is. But none of these actually took on the underlying issue: Patriarchy/systemic sexism. These attempts willfully watered down the message or tried to gloss over inequality by saying how it’s bad for all, and men simply need to understand women’s point of view and vice versa. The idea that the world as a whole is biased and unfair to certain groups of people is unpalatable to the general populace as explained by the “Just world hypothesis” in psychology [1]. Consequently mainstream media shies away from it as well.

[1] “People have a strong desire or need to believe that the world is an orderly, predictable, and just place, where people get what they deserve. Such a belief plays an important function in our lives since in order to plan our lives or achieve our goals we need to assume that our actions will have predictable consequences. Moreover, when we encounter evidence suggesting that the world is not just, we quickly act to restore justice by helping the victim or we persuade ourselves that no injustice has occurred. We either lend assistance or we decide that the rape victim must have asked for it, the homeless person is simply lazy, and the fallen star must be an adulterer.”

Y-films, however, takes on this systemic inequality unapologetically in their latest YouTube mini-series Man’s world. 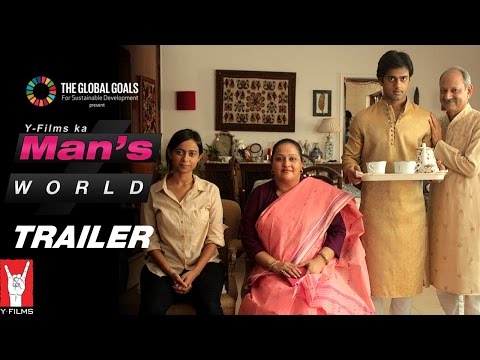 Gender flipping as a device in mass entertainment is not new. What is relatively new perhaps is using it as a vehicle to examine sexism. The earliest example i’ve come across is Tootsie in which Dustin Hoffman plays an actor masquerading as a woman to get a job. The film released in 1982, at a time when attitudes towards gender roles in the US were actively shifting, and mainstream media started presenting women in industry and business. Hoffman, in an interview, breaks down on camera while recounting the “epiphany” of empathy he had after living a woman’s experience during his transformation into the Dorothy character.

In the past couple of years, a clip of Hoffman’s interview resurfaced in the viral world, along with a slew of gender flipping videos tackling sexism and misogyny head on. From an intense and disturbing French short film, Oppressed Majority to a Buzzfeed video If Men were Women; Australian duo Bondi Hipsters’ parody photoshoot [nsfw] questioning oversexualisation of female bodies to Jennifer Lopez’s video for a single, I Luh Ya Papi [nsfw].

Y-Films’s own gender flipping Man’s World has been created in response to the UN Global Goals for Sustainable Development’s Goal No. 5 – Gender Equality. It is fast paced, clear in its messaging, features a star cast of respected actors and above all carries the stamp of a juggernaut of mainstream cinema, Yash Raj Films. I want to hope that from the youth audience perspective, this is a winning formula and an apt vehicle to get a message across.

The protagonist is a young man with a deeply sexist worldview and this is his story of being put in a situation where he gets to see the world through the lens of those whom he derides. The show features a range of male characters, from the sexist to the sympathetic. Commonly used sexist arguments one comes across on the web and in real life make up the dialogue and i found it hilarious to actually see them enacted on screen.

I saw some parallels with the French short film, for eg., portrayals of openly urinating women, sexual harassment of the protagonist and the victim-blaming attitude he receives from a police inspector when he goes to file a report (upcoming in the next episode slated to air Oct 6). The French film was hard-hitting, whereas the treatment here is comedic. Fear might arise that comedy diminishes gravity and plays down deeper lessons. This is a legitimate concern, however, well delivered comedy can be a devastating teacher.

While discussions can be had on whether the conception of the male and female characters in their original and flipped states tends towards populist formulations of gender that could end up being detrimental to the cause, i think it is more useful to focus on the overall concept. We do not see our own patterns of behaviour due to internalised normalisation. To see on screen what it is like to be someone else, to walk in their shoes, is a key tool towards building empathy. Towards this, i do think that the filmmakers have done a decent job in keeping the focus on the concept. It would be interesting to see some kind of follow-up videos continuing the discussion after the series ends, on what kind of response they got and the takeaway from all this about the deeper systemic weaknesses.

The series provokes people to speak up and one can see evidence in the comments section. Each episode ends with a statement by the actors reiterating the goals of the series. The statements could be construed to appear a bit self-promotion-y, however i think they make a meaningful call to action. I must invoke here bell hooks’s words – “We go far beyond reasonable, constructive criticism, to dissecting any given woman’s feminism, tearing it apart until there’s nothing left. We do not need to do that. Bad feminism – or really, more inclusive feminism – is a starting point.”

What is it that stops us from speaking up? Most obviously the milieu we inhabit. And what is something that enables us to speak up? Having a platform.

My own experience in India of the 1980s, my school-going years, was a fraught one; unease stemmed from normalized misogyny and sexism – in real life and reflected in the media, with no safe spaces to openly vent. One was expected to not speak up. The recipient of harassers’ bad behaviour was the one expected to feel shame; the latter were let off, for “boys will be boys”, “it’s just a joke” or “just ignore and they will go away”. But they didn’t go away. And if one did speak up against harassment or unfairness, one would be looked at as out to rock the boat, the angry rebel, the bad influence. So many girls and women bottling up daily slights…

Cut to today, you will find me satisfied. I attribute this to the seething platform of the internet. While much hate and nastiness do their rounds online, it is good to see in the Indian context the spaces available for so many to speak up, as well as people freely saying things unacceptable just a couple decades ago. This blooming of conversations and debates on the web and their being taken from keyboards to streets by activists who use the net to organise is an exciting phenomenon. It took a while, it takes YRF-like banners and popular Bollywood stars to get people’s attention to what some of us from before the internet have been screaming for decades; but ultimately, to see a series like Man’s World openly discussing misogyny and sexism in the mainstream is heartening. It means to me that we have reached a place where it is OK to speak up.

( Many thanks to Lalit Mohan Chawla for the article idea and all his inputs. )

By the end of each video, the participants explain a few points and as they say subtlety is a huge problem. There are a few scenes which might need explanation.

Our thinking is shaped by the point of view of the dominant sex. And since most media is created from male POV, it becomes the general narrative. In popular consciousness, tropes of “women can’t drive”, “women are emotional” or “women use their sexuality to rise up in careers” get repeated so often that they become “sticky” and difficult to unlearn.

People notice a women’s only picnic and other seemingly sexist arrangements, and these get exaggerated, reiterated and mocked in sitcoms and movies as easy points to jump on and criticise feminists. We learn to feel sympathetic for Kiran and frustrated on his behalf in the first episode where budget for picnic is allocated.

None talks about how most “client-meets” are almost all-male and held at times unsuitable for women in general (due to family-curfews, social pressures and safety issues), or the mere presence of a woman draws judgement on her character. We never notice the advantages we get, that’s just how privilege works. And It’s not just about recreation. A lot of decisions are made outside the office, over beer. Such implicit career advancing advantages men get go unnoticed.

People learn to irrationally hate the “cute-face” who got promoted instead of his peers. None talks about how “cute-face” is much more than his appearances. The series does a witty take down of such tropes. For instance, in the second episode @4:00-6:00, after the gender switch, we find two women gossiping about how a man bagged the promotion a certain Gayatri deserved, only because he wore “revealing” clothes. Cue, the entry of said man. Our protagonist chides him for dressing “inappropriately”. The build up here plays right into caricatures of women presented in mainstream media. And it’s this build up which allows for the shock-value and epiphany when the man gives his point of view, which we never get to hear otherwise – how he salvaged gayatri’s mess-ups, how he worked late night and on weekends saving the project from being scrapped. Just because he is a man, it’s assumed he cannot work hard. Just because he looks attractive, he is assumed to be stupid. No matter how hard he works, he is no more than “A cute face and butt for Gayatri”. This works at several levels. For the switched-world, it works for his best friend who suggests unbuttoning the top two buttons is to get a promotion, which is a reflection of women who have internalised sexism in the real world or (even if half-jokingly) endorse it. It also works for the those of us who who have bought into the narrative that women use their sexuality to rise up in career. And by the end he asks the protagonist that why did he, being a sensible person buy into it which is a question he is actually asking all of us.

Gender pay-gap and diversity hiring are another two important issues which this episode broaches. Often companies adopt initiatives from a superficial box-ticking perspective towards fostering diversity and giving incentives to women. It takes deeper and more thoughtful initiatives to have better representation and fair involvement of the non-dominant gender at the workplace. To make a meta comment, and not to sound too cynical, but we hope that YRF isn’t simply jumping on the bandwagon of touting feminism for CSR purposes, or as an obvious means for getting clicks by adopting the flavour of the season, “feminism”. We hope that they try to be more direct in future episodes and don’t water down their stance to appeal to a greater population.

These are all important issues, and we hope YRF will do justice to them in upcoming episodes.

Satya is a writer/vocalist/composer with a deep curiosity for the why and the how. Follow her on Twitter: @desigrrl