We met on September 19. We had decided to meet at naivedyam, hauz khas. We were expecting a gathering of 10-15 members, but like matsya avatar, we kept growing till we could no longer be contained in naivedyam and had to move to larger place.Besides the eerie posters of krishna and cows everywhere were creeping us out anyway. 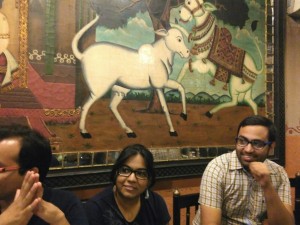 We decided to move to The Project At Park Balluchi.The place looked very welcoming.And had huge open table that could accommodate all at once. 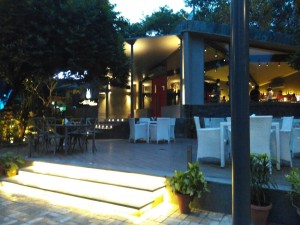 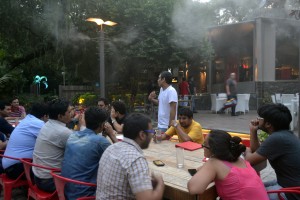 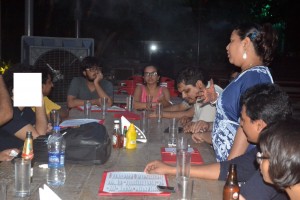 Soon we had to move indoors, due to rain for the after-meet. We split into 3 tables and ordered our drinks. While one table discussed recent results of JNU elections, one discussed music, one talked about the various atheist groups and pages on facebook. 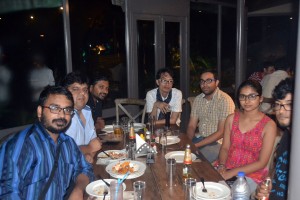 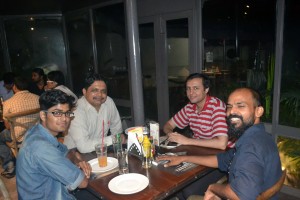 With time people kept leaving and tables kept merging and discussions kept getting spicier with more drinks down the system till only 4 of us were left, 6 hours later.We decided to stay a little longer and have dinner before leaving.In the after-after meet, we had a few meta-discussions.We talked about the problems and security risks of running facebook pages on facebook. Competing for the edgerank on facebook with clickbait-ey pages without stooping down. We talked about the importance of creating fresh and original content. We realized how trying to find a place and time that suits everyone is becoming difficult with growing size and diversity of the group is just not working.Also a lot of time is spent on introduction sessions and several people leave early and do not get to stay for the after-meet where the real action is at.

We decided to have several different themes of meets, some aimed at students, some aimed at working professionals. We also decided to have different kinds of meets, Open:open to everyone and ideal for new members to attend and get to know each other. And agenda-meets for the regular members only, where we can go straight to discussing topics decided without having to explain our objectives or spend time on introduction sessions.To stay updated, please join our meetup groups.