As many of you are aware, recently, a widespread viral post ostensibly entitled ‘Don’t Mancriminate’ circulated social media. It had a pictures of  random men with a poster over their lips bearing messages. Allegedly, they represented silencing of men in the drive for women’s rights.

In what way are these men silent? When politicians, our so called leaders, threaten to rape those who speak out against whatever atrocity said politician is indulging in? Or when normal people threaten the same on social media? Or is it when they make these memes to post?

If people like the creators of these memes could be personified, it would be Kanye at the VMAs, during Taylor Swift’s award acceptance. Even barring the ridiculousness of the post as a whole, let’s look at the memes themselves.

NO HEELS FOR MEN 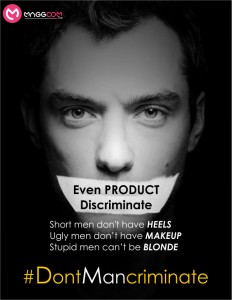 The first in the series is by far, the most ridiculous one. This post claims men feel discriminated against because they can’t wear heels, or make up. Also, apparently men want a stereotype…?

The creators must have forgotten their history lessons. Heels were originally designed for and worn by men. “As early as the 10th century, many horseback-riding cultures wore heels on their boots and on their shoes, because heels help you stay in the stirrups (which is why cowboy boots have heels)[1][2].

Flaunt your inner historian. Wear heels. Who’s stopping you? If YOU don’t feel comfortable wearing them, that’s not anyone else’s problem. Here’s RDJ rocking a pair of heels: 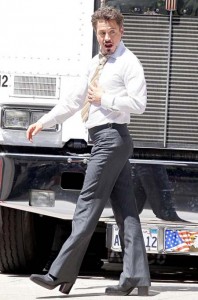 As for the make-up, they do realize exceptionally high beauty standards for women and dark-skin shaming are issues, right? That it’s a billion-dollar industry people are fighting against? And someone actually wants this?
As far as I am concerned, you are welcome to it. Just don’t come crying to me when you end up spending most of your salary on face products. 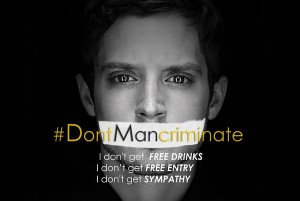 You don’t get roofies with your drinks. You don’t get groped on your way in either. And last I checked the majority of people out there sympathized with the aggressor in any rape/molestation case. I mean what kind of an issue is ‘wanting sympathy’? Can I get all sad and bothered because I don’t get enough attention? I have to check my local create-an-imaginary-problem office about this.

Sarcasm aside, let’s back up for a moment here. Who provides the free drinks? The ‘alleged’ sympathy? Who insists on attractive women getting free entry so that you get to ogle all night? If you don’t like it, don’t do it. It’s that simple.

We have serious concerns that affect men. Domestic harassment, sexual abuse that do not get taken seriously….and your problem is with free drinks? Buy it with your extra earnings from the gender-gap pay.

YOU WANT MY PRIVILEGE? I WILL FIGHT YOU FOR IT, SCHOOL YARD STYLE 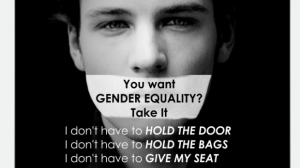 Yes you don’t, no one asked you to. You know what is asked of you? Basic courtesy and respect. Hold the door not for me, but for anyone behind you. Hold the bags for anyone struggling. Give up your seat for someone who needs it. We’ll do the same.

And while we’re at it, don’t expect sex if we kiss you. Sometimes a kiss is just that, a kiss. Don’t expect a night if we agree to an evening. Even if you pay. We’ll pay for the next one. No one’s bartering food for sex.

“You want gender equality. Take it”. It’s not a toy you have and that I want. Nor is it a competition. It’s a building of society based on equal opportunities. You don’t want double standards? Ensure you don’t contribute to it.

I DIDN’T GET LUCKY. DISCRIMINATION! 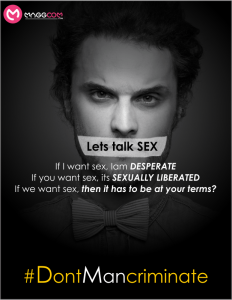 I WANT TO SLAP SOMEONE. I SHOULD BE ABLE TO! 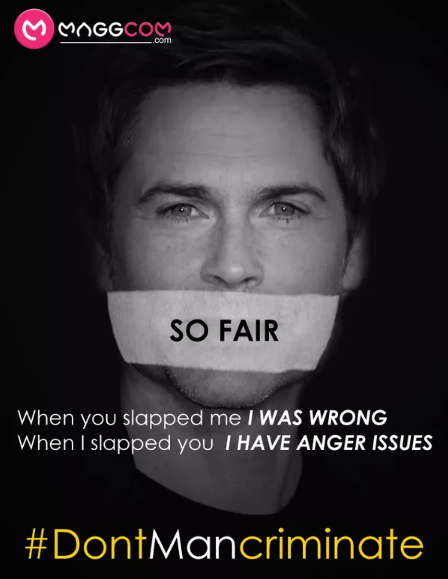 No one should slap anyone. Period. I can’t stress this enough. So why are we arguing about it? Is promotion of violence and “slapping rights” really what the creators feel men require? This is just sad.

I DON’T FEEL LIKE STANDING. SO WHAT IF THERE’S A GOOD REASON FOR WOMENS’ ONLY TRANSPORT? 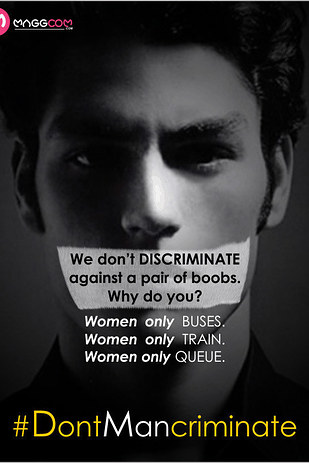 .And for the grand finale we have the sentiment that makes the most rounds on social media. I’ll pose this question: if I remove all women’s only transportation, can you guarantee no woman will be assaulted?

I get that it’s not an ideal situation, nor is it a foolproof one. But seriously, is the comfort of your butt for a few hours worth more than a woman’s life? And yes, not all men are like that. But refer to the article on Schrödinger’s Rapist [1] [2]. You may know you only want to sit, but others don’t.

If a parent wishes to keep a child from you, would you begrudge the parent’s desire to keep the child safe? Using the same concept, we are all Schrodinger’s Pedophile here. The parent doesn’t know you. Neither do the women on buses, trains or queues.
(Also “We don’t discriminate against a pair of boobs. Why do you?” – What is this even supposed to mean? That they like all boobs? That everyone should like boobs? I’m so confused.)

Double standards exist in society. There is no hiding that fact. But if we all begin to compare who has it worse off, all we achieve is further division and dissent. These posts are the Facebook equivalent of sensational journalism. Bold lettering, eye catching background and little logic.

It’s sad that trivial (and sometimes ridiculous) problems are being presented as ‘serious’ concerns against half of the populace, completely ignoring the real issues patriarchal society as a whole forces you to swallow.

That’s not how it works, guys. There isn’t a finite amount of decency and common sense in this world.”

I am a very vocal feminist, atheist and a passionate bookworm with a perpetual case of the munchies (the name should clue you in to the last part). I study engineering but social studies and politics always fascinated me. I am a firm believer in freedom of expression.