This is the concluding part of the two-part article on Pluto. Please go through Part 1 before jumping in here.

There are roughly two very distinct features on Pluto’s surface.

1. Tall mountains and very few craters
New Horizons has snapped up spectacular images of patches of mountains on Pluto, some of which are very high. There are mountains which are as high as 3 km. Given that Pluto itself is 2400 km across in diameter, a 3 km mountain is huge; a similar comparison on Earth would make the Everest more than 15 km in height rather than the present 9 km. In addition to this, there has been found a large rift running across the face of Pluto for about 300 – 400 km, very much like the Rift Valley on Earth. 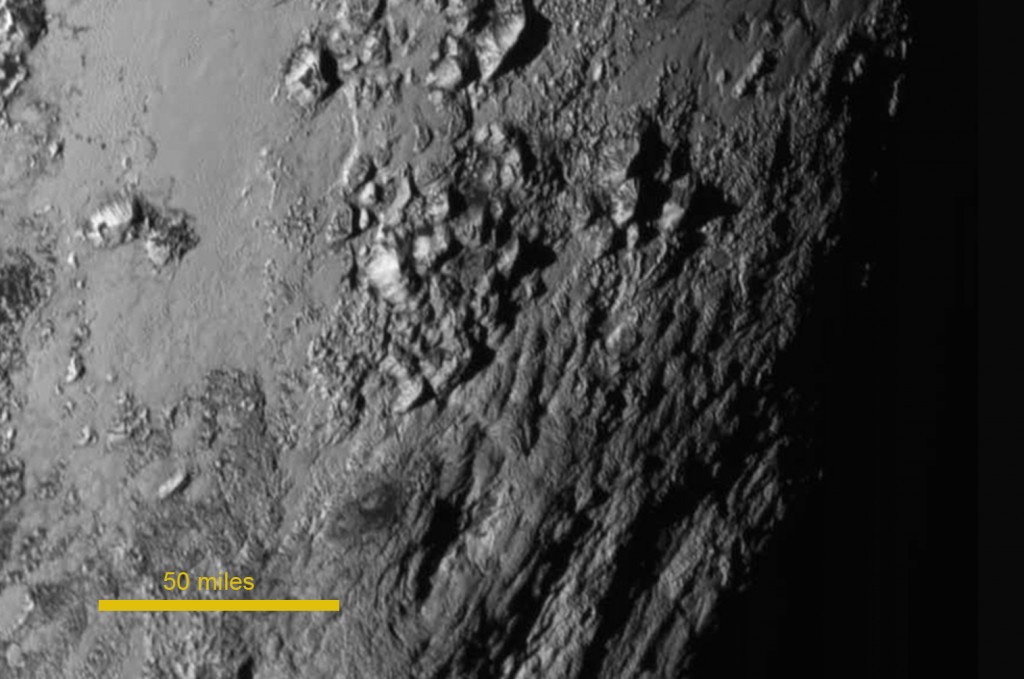 The mountains on Pluto, as seen by New Horizons. Note the straight line running roughly diagonally; this is the rift (Courtesy: NASA)

This isn’t a problem by itself, however; disproportionately tall mountains can exist. What is really puzzling is the lack of craters from meteor impacts. New Horizons has seen very little by number of impact craters, which is very weird since Pluto must have been bombarded heavily. Pluto’s companion Charon is pockmarked with impact craters, but Pluto seems to have got rid of its blemishes.

Here’s the problem: if there are processes capable of getting rid of craters, how do mountains still exist? Craters don’t exist on Earth in sufficient number, since they have been eroded by water and wind erosion. A more prominent cause of crater disappearance is tectonic movement – the landscape of the Earth has been stretch, crumpled, fractured and subducted at various points throughout Earth’s history due to tectonic activity eroding it of a large number of features that it might have originally had, like craters. Additionally, tectonic movements have created unusually high fold mountains, like the Himalayas. In addition to this, tectonics has created ridge-like features, such as the African Rift valley. Similar to that seen on Pluto!

So could Pluto turn out to the second body in the Solar System which is tectonically active?  The problem is that Pluto is simply too small a body to be harbouring a not-so-solid mantle, which is a requirement for tectonic activity. It shouldn’t have moving plates for the same reason that the Earth’s moon doesn’t have them – it’s too small and it’s cooled off from the time it was created.

Unless, of course, Pluto isn’t all that old and hasn’t reached equilibrium. Pluto might have been created much later than the Earth from the collision of two other bodies. That would explain the molten mantle and the tectonic plates. If that is really the case, and bodies as prominent as Pluto can form later by collision, we should expect other such bodies too. The Solar System might be a very violent place. All of these claims have to be well-verified, before anything definitive can be said.

No one is willing to stick one’s neck out right at the moment. More data and possible future missions to Pluto will help us with this conundrum.

2. Ice flows on the surface

Before we get into ice-flows, it is instructive to get to know the topography of Pluto. One of the most distinctive feature of the Pluto landscape is the giant light-coloured heart shaped plain named Tombaugh Regio, after Pluto’s discoverer. At the heart of this heart shape lie the vast plains called Sputnik Planum. This is the home of the swathes of exotic ices, which seem to be flowing on the surface, a phenomenon seen only on active bodies like the Earth and (maybe, at some earlier time, on) Mars. 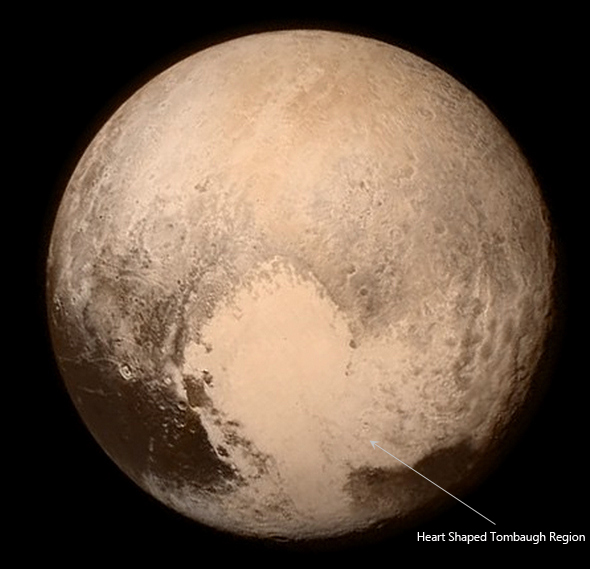 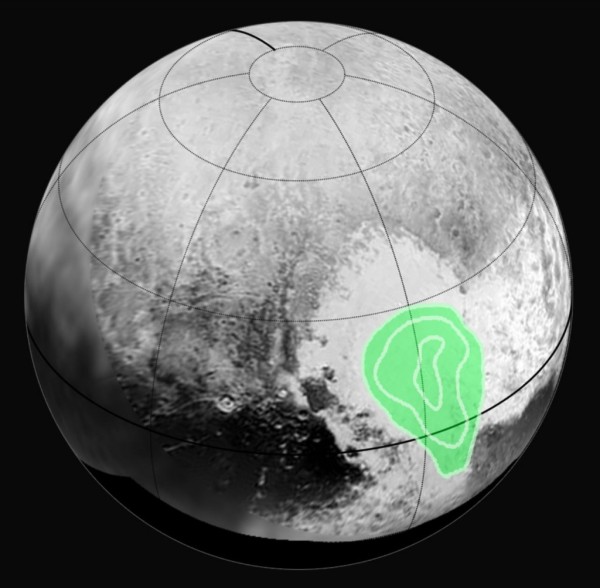 The Carbon Monoxide rich ice resides here in the Sputnik Planum and beyond (Courtesy: NASA)

These aren’t ice sheets formed from necessarily from water, but maybe also from methane and carbon monoxide. You’re actually looking at a celestial body which has flowing ice, much like the Earth. If the ice is water-ice, and the surface just below the crust is warm, there might even be liquid water on Pluto. All of this is just hypothesis at the moment, though. 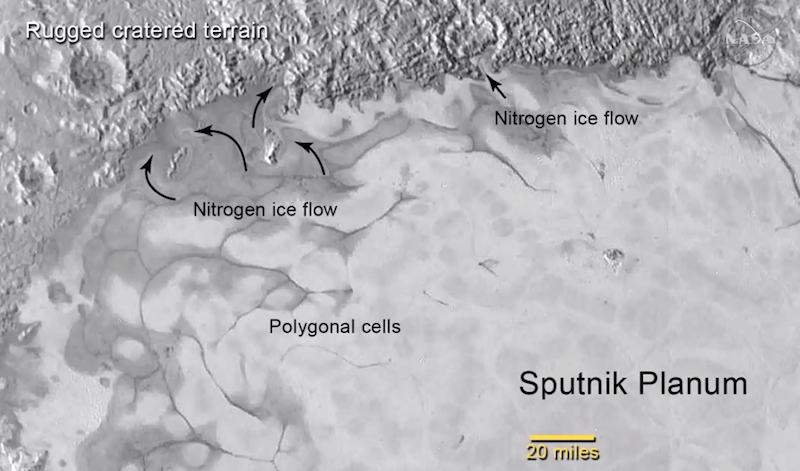 There seem to be two outflow regions to the southwest and to the northeast of the Sputnik Planum; these might represent the transport of the exotic ices to the poles. Just south of the Sputnik Planum, lie mountains which are about  1.5 km in height; these are called Hillary Montes, after Edmund Hillary the first conqueror of Mt. Everest. This region seems to have been invaded by these new icy flows. Ice flows in the past might have been responsible for deleting all impact craters on the surface too.

There appears to be seasonal transport of ice from the equator to the poles. More data from New Horizons will reveal more.

The following video has been put together by Bjorn Jonsson using the first data that New Horizons beamed back and clearly shows the bright ring that Pluto’s atmosphere forms when you look at Pluto from its dark side. The existence of the atmosphere isn’t itself a big mystery as we saw in Part 1, but scientists have been puzzled by the haze in the atmosphere.

LORRI detects that the haze extends far beyond the expected altitude – some places had haze at altitudes as high as 130 km. There seem to be two layers of haze – one at 50 km (30 miles) and another at 80 km (50 miles). 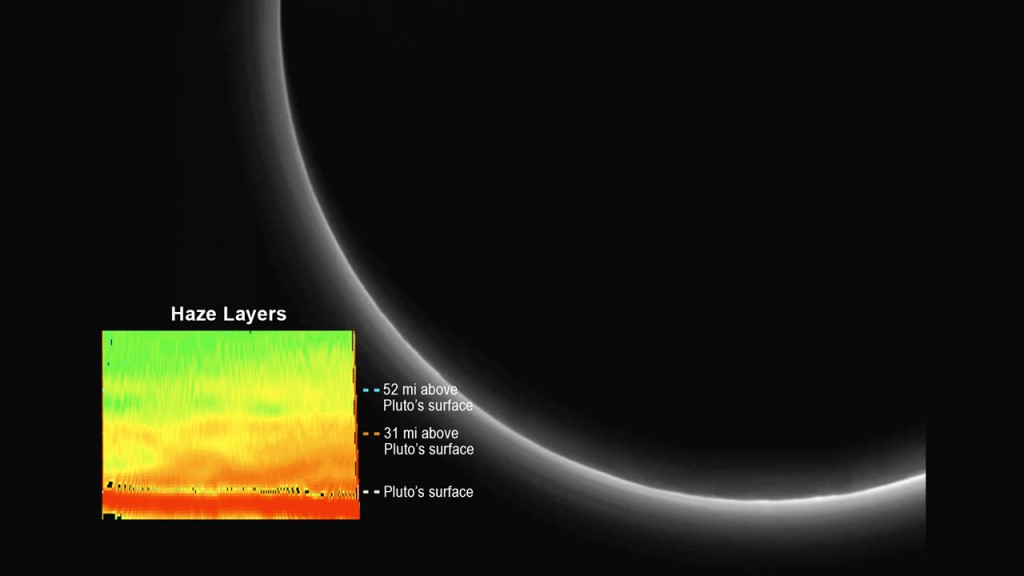 The haze seen in Pluto’s atmosphere (Courtesy: extremetech and NASA)

Scientists had earlier estimated the haze altitude and they had pegged the figure at about 20 km. Clearly, something is wrong! The most likely mistake is the composition of the surface, either quantitatively or qualitatively.

The hazes are formed when ultraviolet (UV) light from the Sun breaks up the methane gas molecules, allowing it to form more complex molecules like ethane and acetylene. Traces of both these organic compounds were seen by New Horizons. Condensation of these molecules gives rise to tiny particles of ‘ice’, creating the haze. The UV light can further act on these organic molecules and form tholins, which are complicated polymers also found on Saturn’s moon Titan and possibly on other bodies in the Solar System.

2. Nitrogen stripped off from Pluto’s atmosphere

New Horizons’ SWAP has detected a lot of nitrogen ions which are being stripped away from Pluto’s atmosphere by the rays of the Sun. This huge plasma tail, consisting mostly of nitrogen ions, should’ve depleted the atmosphere much more than what New Horizons observed. Estimates from SWAP data reveal that the nitrogen loss is a staggering 500 tons per hour, probably due to the weak gravitational field of Pluto, compared to something like 4 kg per hour for Earth. 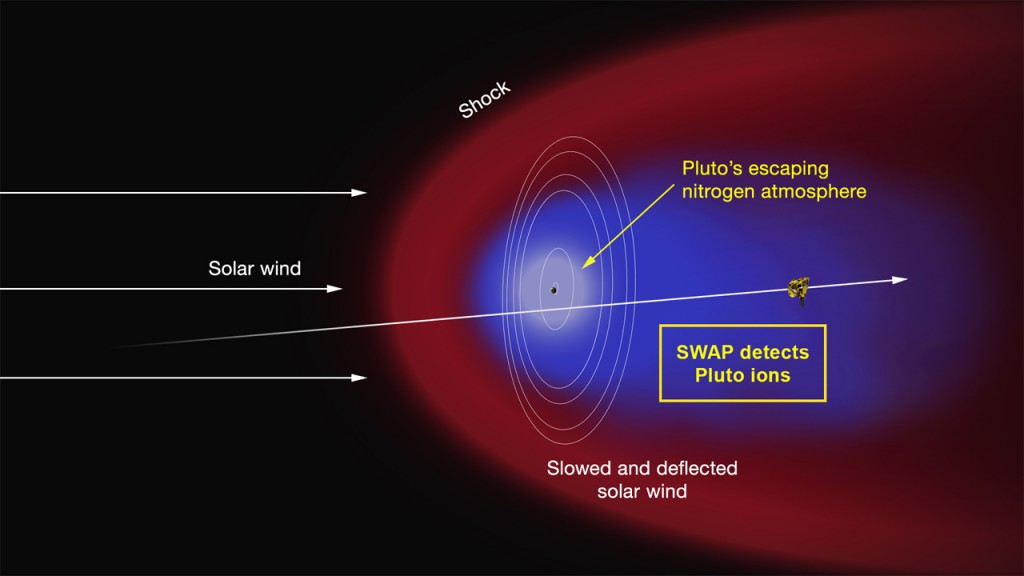 There is a problem here – the atmosphere, which should’ve depleted its nitrogen content by now, is being replenished by sources unknown. There is suspicion that these sources are cracks on the surface, like fault lines on Earth, which is releasing vast amounts of nitrogen, compensating the loss due to the solar wind.

Pluto and Charon – sharing an atmosphere

Before signing off, it is worthwhile to take a look at Pluto and Charon as a system and not as separate bodies circling each other. There are several reasons for it. Charon is half the size the Pluto and one-eighth the mass; it is far bigger than the other moons, Hydra and Nix. Charon and Pluto revolve a common centre of mass, called the barycentre. Unlike for most other large bodies of the Solar System with a large moon, the barycentre of the Pluto-Charon system lies outside any of the two bodies.

The barycentre for this system lies at the spot marked by the ‘+’ sign. For the Pluto – Charon system, the ‘+’ lies above the surface of Pluto. (Courtesy: Wikipedia)

Pluto and Charon might even be sharing a thin atmosphere, but we can only say for sure with more data. The most dramatic observable is the presence of dark spots on Charon similar to what is seen on Pluto. Given that the tholins on Pluto give the dark appearance on large stretches of its surface, it is indeed puzzling as to how Charon gets black spots without having any significant atmosphere of its own. 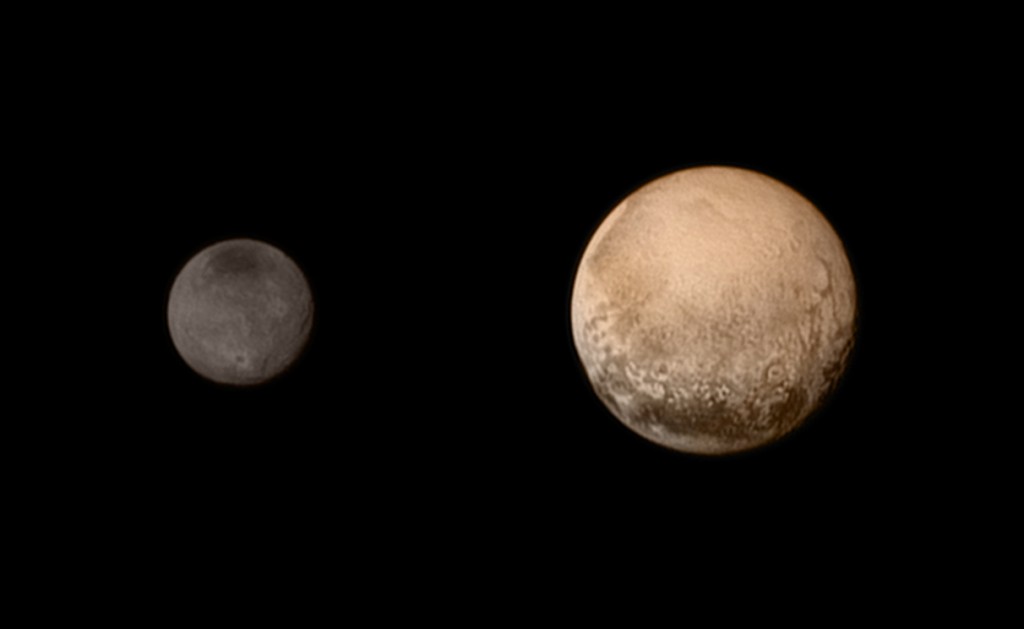 Pluto and Charon seen in colours, as shot by New Horizons. Note the dark spot on Charon near the pole (Courtesy: NASA)

A plausible solution is that Pluto transfers its hydrocarbon rich atmosphere to Charon. This kind of gas transfer has been seen when two stars circle each other in a binary star system, or when a star orbits a neutron star or a black hole. A more extended Plutonian atmosphere also increases the possibility of gas transfer. This might be responsible for a thin Charonian atmosphere.

Signing off: one and a half billion kilometres beyond Pluto

New Horizons is still downlinking data regularly. Meanwhile, it is moving deeper into the Kuiper belt and as of writing, a new object has been selected for New Horizons to perform a flyby of. This object is about one and a half billion kilometres beyond Pluto! Named in the catalogue as 2014MU69, it will be the first Kuiper Belt object beyond Pluto and its moons. New Horizons is expected to reach its expected target on 1st January, 2019.