In looking at Pluto, we’ve opened a Pandora’s Box – one we thought was surely going to be empty.

If you haven’t been living on Mars in the past two months, you must have heard about the incredible flyby of the dwarf planet (sorry) Pluto by the NASA spacecraft New Horizons. What we expected to see was a dull world, a bigger-than-usual rock at the edge of the Solar System, heavily cratered by numerous meteor impacts and without a significant atmosphere of its own. But, as is often the case, Nature surprised us and we shall discuss the Pandora’s Box that is Pluto.

How We Found Pluto

First, a little bit about Pluto’s history from a human point of view.

When Uranus was discovered in March, 1781, by accident one might add, people started following its orbit. It was soon realized that it wasn’t a star as was initially thought, but really a giant planet. Our Solar System had expanded to 7 planets. Watching Uranus closely for several decades, astronomers noticed that it didn’t quite follow an elliptical path. There were often protuberances along the orbit, suggesting that there was a massive body tugging Uranus along. By noting how fast these bumps on the ellipse of Uranus occur, one can calculate the time period of revolution of this unseen object. That found, using Kepler’s third law, one can calculate the approximate distance of this body from the Sun. Knowing the amount of bumpiness in Uranus’ orbit, the gravitational force can be measured, and given the distance of the unseen body, its mass can be ascertained. So now that you have both the mass and the location of the this hitherto unknown body, someone should just go ahead with the biggest telescope known to man and try to find it.

And find they did! Neptune was discovered in September 1846 and people started studying its orbit as part of the well-rehearsed ritual. Sure enough, they discovered perturbations along Neptune’s orbit and we were looking for yet another planet, something the size of Neptune, a bit farther away.

Nearly 7 decades later, people had found it – in the February of 1930, Pluto was discovered by Clyde Tombaugh, the first planet to be discovered by an American. Pluto was surely as massive as Neptune! Closer observations disagreed.

The size of Pluto kept shrinking as the decades went past and better telescopes were built. Where was this planet influencing Neptune? As people revisited calculations for the perturbations in Neptune’s orbit, it was soon realized that there were no perturbations. The calculations were wrong and we never need another planet to fix Neptune’s orbit. Pluto was an accident; a child of an astronomical miscalculation. 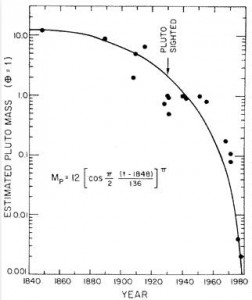 The shrinking of the estimated size of Pluto was nicely captured by a tongue-in-cheek article by two geologist, who wrote a paper titled “The Pending Disappearance of Pluto”. In the ‘paper’, they fitted curve to a size estimates (yes, they interpolated a best-fit formula too) and predicted that Pluto is going to disappear by 1984. Quite the Orwellian prediction, they encouraged Pluto watchers to hurry up.

To be or not to be a planet, that is the question

Pluto is the largest known body from the region beyond Neptune and for more than 60 years, from 1930 to 1992, remained the only one we knew. In 1992, David Jewitt discovered 1992 QB1, a body of approximately 200 km in diameter. As more objects from this region, known as the Kuiper Belt, were discovered, like Quaoar (discovered in 2002), Sedna (2003), Makemake, Haumea and Eris (all three in 2005), people started to seriously debate the definition of a planet. The question was simple: If Pluto is a planet, why aren’t these?

This was a topic of much heated debate in the International Astronomical Union (IAU) General Assembly of 2006 at Prague. The quick resolution of the problem was to simply incorporate these newly discovered bodies into the category of planets; overnight, the number of planets increased from 9 to 12. However, there was tremendous opposition to this plan – people rightly suspected there to exist more bodies like Eris and the rest beyond the orbit of Neptune. Are we going to keep on revising the number of planets as we build better telescopes? Is the additional confusion for the public, and especially for school kids, worth any astronomical gain? There was voting and the proposal was rejected.

The criteria for a body to be a planet were outlined in the same General Assembly. It has three major points:

The last of the three proved to be a stumbling block for Pluto. Pluto shares its objects with numerous other similar objects. It is not big enough to clear them away and is certainly not the most gravitationally dominant object in its neighbourhood. And hence, in 2006, Pluto was demoted and placed in the new category of ‘plutoids’, which was a sub-category of ‘dwarf planets’.

Of course, there are minor planets, comets, natural satellites and thousands of trans-Neptunian objects in our Solar System as well. Too confusing? Here’s a quick diagram from Wikipedia to help you with the classification. Note how planets are an exclusive class – an object is either a planet or something else. 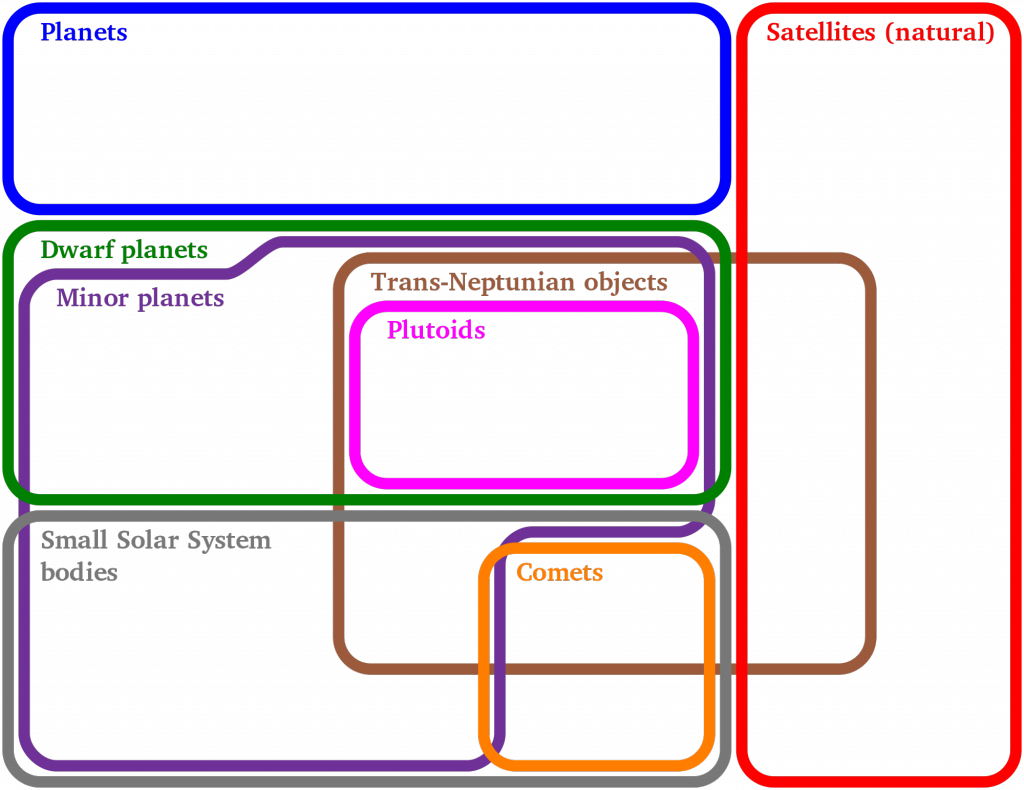 What we knew about Pluto

The orbit of Pluto was the best known aspect of the ex-planet. Hubble had taken a picture of Pluto, but it was a hazy picture. We had no idea about the surface of Pluto either in terms of composition or terrain. Pluto is a cold world and this led people to consider that it might actually have an atmosphere. Small planets are not expected to be able to sustain an atmosphere, simply because their gravitational pull is too weak to keep the molecules of gas from flying off to space. However, Pluto, being far away from the Sun, is so cold that the gas molecules might not be fast enough to escape even the weak gravity of Pluto. Of course, the atmosphere would be thin – the Solar Wind would keep peeling it away. 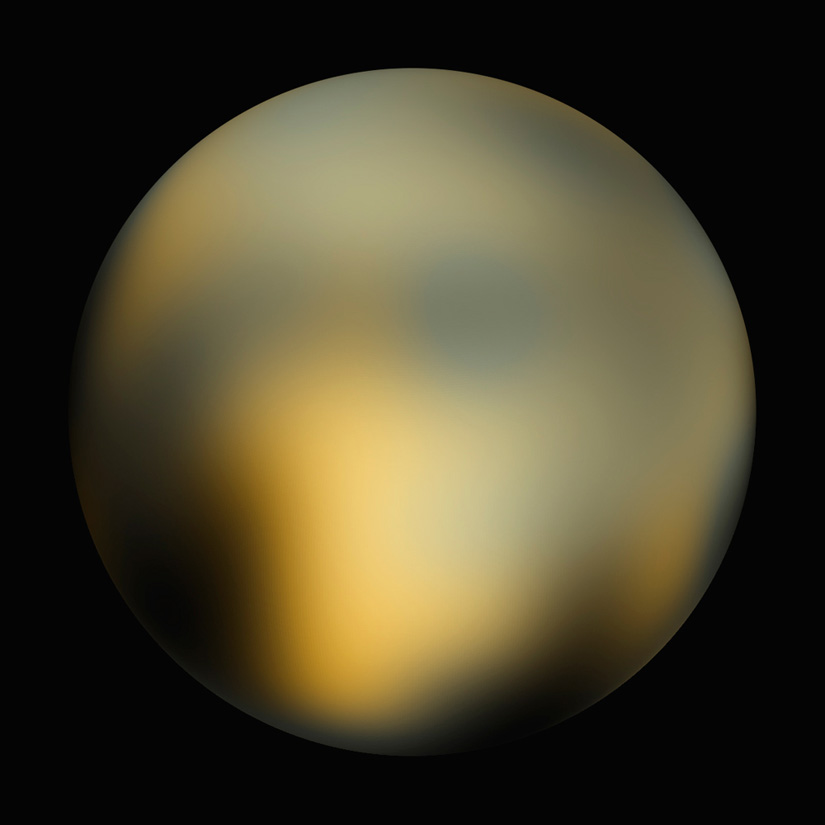 We also knew about the moons of Pluto. Charon is the biggest, about half the size of Pluto, and there are others like Nix and Hydra, much smaller than Charon and only seen as pixelated dots by Hubble.

Almost every bit of this knowledge would be either transformed or massively supplemented by the New Horizons mission.

What is the New Horizons mission?

It’s worthwhile taking a brief look at the mission which transformed our vision of this faraway world. New Horizons left for Pluto in 2006 and, even though it is the fastest spacecraft we’ve made, took almost a decade to reach there. It first aimed itself at Jupiter, used the giant planet’s gravity to slingshot itself towards Pluto – a manoeuvre outrageously difficult, even for NASA.  This was needed to propel the spacecraft to high speeds, so that it reaches the faraway Pluto in a decent time. Of course, since it was moving so fast, it couldn’t orbit Pluto and a flyby was all that it could manage. 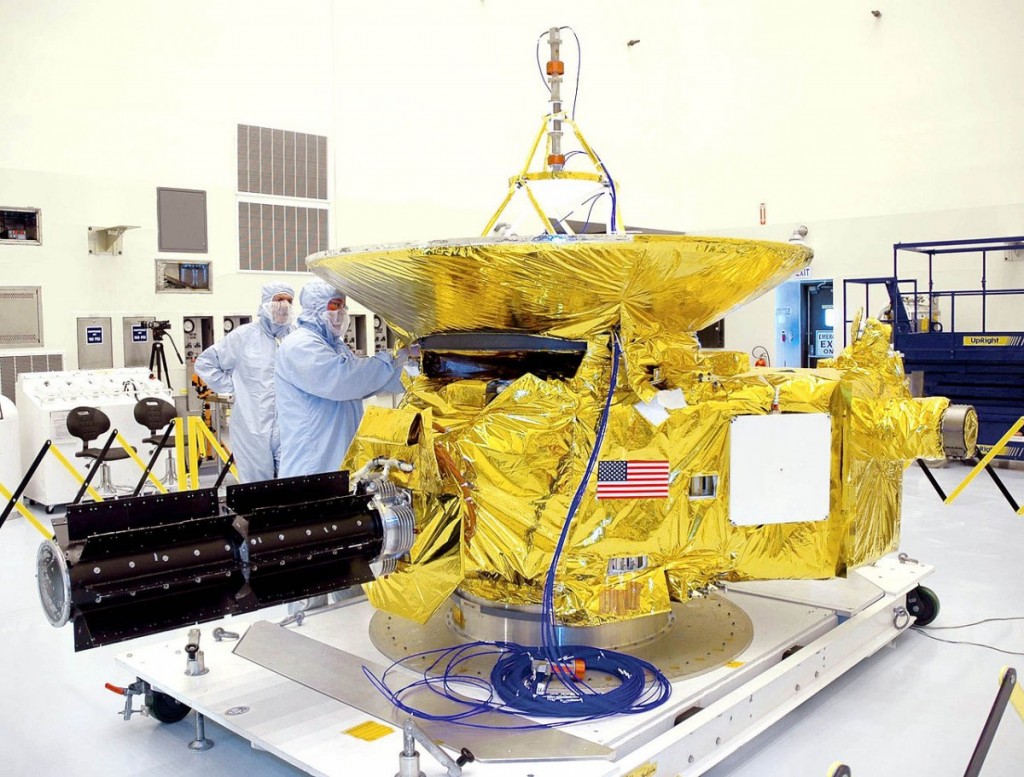 New Horizons was flying at a speed of 58,500 km/hr. Sound travels in air at about 1,200 km/hr. That means New Horizons was going at 49 Mach! That is a record that won’t be broken in a hurry. Clay Bavor, a Google employee, has made a comparative visual aid to show just how fast New Horizons was really going. Please note that the speed indicated (36,000 mph) was achieved by New Horizons after it was slingshot from Jupiter. It would’ve burnt up in the atmosphere if we could even achieve that speed at launch.

While it was reaching Pluto, it started snapping photos with its on-board telescopic camera and these are the ones we see today. It has collected a huge treasure trove of information about Pluto and its neighbourhood, but it’s going to take more than 18 months for NASA to downlink all of that from New Horizons. There are three reasons to that – one, New Horizons uses very little power, only about 200 watt at peak usage. Next, it can only transmit when it’s looking at the Earth and for that to happen the entire spacecraft must orient itself to face Earth. Lastly, because of Earth’s rotation, there can be no reception of any signal from New Horizons when the receiver is facing the Sun. Thus, the 14th July flyby data remains largely unknown.

New Horizons has seven instruments on board and we shall quickly list them out for future reference:

Among other things, New Horizons is also carrying a small amount of ashes of Clyde Tombaugh, the discoverer of Pluto. Tombaugh’s last wish was to have his ash sent to space; NASA sent it to Pluto. 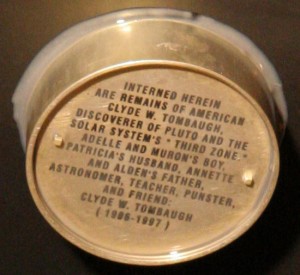 A little of Tombaugh’s ashes is onboard New Horizons (Courtesy: NASA)

Although we are waiting for much more data from New Horizons, we can already make some rather startling observations about the surface of Pluto. We will see that these open up a Pandora’s box, one filled with questions for planetary scientists. Pluto is a world unlike any we’ve ever seen before and one which we just didn’t expect to see.

You can check out the New Horizons NASA page here.

The fun begins in Part 2, as we talk about Pluto’s surface and atmosphere.