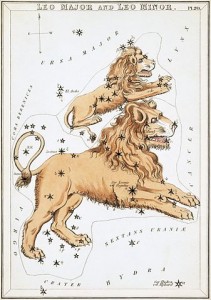 ‘Pushkaram’ of a river is a Hindu religious concept and is triggered when the planet Jupiter ‘enters’ a zodiac sign that is linked to a particular Indian river. There are today 12 zodiac signs and 12 such rivers in the country are thus linked to the zodiac signs. Thus every river would get a pushkaram once in 12 years, because Jupiter takes nearly 12 earth years to complete a full revolution around the sun. So the planet ‘spends a year in each of the zodiac signs’. The first 12 days and the last 12 days of the year are particularly auspicious.During the auspicious time all the 33 crore Gods of Hinduism will take a dip in the water. This is the right time to wash off your sins.Those who die during the auspicious time are lucky.

Such are the beliefs associated with Pushkar, an event where millions of pilgrims congregate – it is of the order of a mini-Kumbh Mela! The Kumbh Mela is one of the great congregations of believers in the world, rivaling the gatherings in Mecca. It is worth visiting to see what unites the believers and what brings them there.

As Jupiter has now ‘entered’ Leo or ‘Simha Raasi’, it is River Godavari’s turn this year. 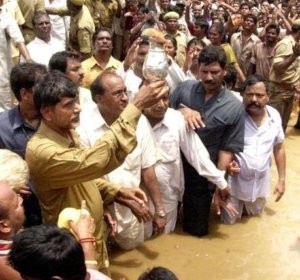 ‘Have a holy dip in the river and all your sins will be washed away’ – the Chief Ministers themselves claim, accompanied by priests! Publicly funded advertisements are encouraging people to go to the Pushkar celebrations to get punyam – the reward for their piety.

To get punyam one has to not only have a pure heart but also give alms or make a donation. Not alms to the poor and the needy, to the hungry and the sick, but to the Brahmin priest. Why should the priest be a Brahmin or how donating a cow or a large quantity of rice to a Brahmin is an act of piety is not explained by anyone. 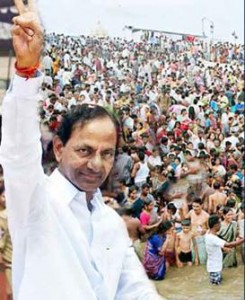 I went to the Godavari Pushkaram many years ago, and thought the experience was special. How could anyone get into the muddy waters of the Pushkar Ghat along with tens of thousands of others,imbibe some river water, and hope to get spiritual reward and not some disease or illness?

Every where you will see half-dressed Brahmin priests helping the devotees offer food to the long-dead, aided by a language long-forgotten by most.In powerful language the rationalist poet Vemana admonished the believers over 300 years ago, asking how the crows which come to eat the food could be their ancestors? In any case, if in the last Pushkar the descendants helped their ancestors goto Heaven, it is not clear why 12 years later they are repeating the ritual.

It is a more pleasant and safer experience by the picturesque villages near Ravulapalem. That is where I saw what a mighty river the Godavari was – and it was not even in spate then!

The Godavari river in perspective

‘Godavari is a great river, it is a huge river, it is next to Ganga in size, it is Dakshin Ganga’, we are told every where, lest we forget.And indeed it is a huge and awe inspiring river – it gives life, but takes away many as well in its tremendous floods. When you call a river a mother, it helps to think also of the floods.

In any case, let us put this river in perspective:

The absurdity of zodiac signs

In any case, blind belief is interesting.

This Babylonian superstition of astrological zodiacal signs was happily adopted by the Greeks. It then came to India and it was promptly incorporated into local calculations and astrological texts. Of course, it is all rubbish unless you think the sun revolves around the Earth!

And despite all the lies being spread, there is no mention of raasis /zodiacal signs in the Vedas. The Double Ph.D professional-astrologer next to me struggled but could not prove other wise, so he meaninglessly started praising the TV channel. Some business people are silly!

Oh yes, how can Jupiter, about 62 crores or 620 million kilometres away from us ‘enter’ the Leo sign which has stars that are 37 million light-years away? Do they know what a light year means? How many thousands of crores of Kilometres is a Light year? How can Jupiter ‘enter’ a Raasi? The error is parallax on which the monumental stupidity of astrological signs is based. The raasis so-called look different if you view them from the moon! And now they are talking of 13 zodiac signs – so they should find another eligible Indian river – do not forget Pushkar is only for Hindu rivers! And there is a fraudulent claim that this happens only once in 144 years! Even some astrologers are disputing the 144 business!

But, on what basis could it be 144 or 1440 years when the very original assumption of entering a raasi itself is ab initio wrong?

Do remember, the Vedas have no mention of raasis, and it is the work of some people doing business with superstition that this wrong idea about the Vedas is being spread. There is much in the Vedas that is interesting and some parts are the height of philosophy of that age -or is it poetry? But the Vedas are products of the human mind of that age, not revelation.

BTW, how come not one astrologer predicted the terrible loss of 23 lives of the poor pilgrims who went to have a dip in the Godavari and got caught in a stampede?
I participated in a couple of telugu TV discussions on the Godavari Pushkaram.
In one the double PhD in the parrot studies of astrology who was sitting next to me – did he have any hunch? Did he give a hint? Another discussion had to be extended by 30 minutes as there was a tremendous public response and the phones kept ringing with eager callers wanting to ask questions.

A Chief Minister said leave your sins in the water. Why do the politicians make the sad assumption that ordinary people are over loaded with sins? Why would they be? Most try to live an honest life, don’t they?

It is important to get some matters clear: purity and piety are different from CLEANLINESS. That is why in Punya Bharat, we still need Swaccha Bharat! The Caste system is based on the idea of birth-based purity! Purity is not hygiene.

Have you seen the muddy waters in the river where the holy dip was being taken? Rivers with such power – which clean us up of our sins like a modern detergent takes care of the stains on our clothes – why don’t they clean themselves and get rid of the chemical pollution as well?

Sin and crime – did Lord Brahma do the right thing?

Also, sin is different from crime! In the mythology that is evoked to justify Pushkar observations, Lord Brahma asked Indra to have a holy dip to absolve himself of the consequences of adultery.

Now think about this – Lord Brahma did nothing to help Ahalya who was criminally deceived by Indra, the Lord of Heaven. Indra had disguised himself to appear like Ahalya’s husband and had physical relations with her in the dark! She was then cursed by her husband to become a stone. And Indra who too was given a terrible curse to have female genitalia all over his body went to Brahma who helped him.

With a modern understanding of morality can we applaud the celebration of a story where a victim is punished and a criminal helped in this manner? In the Indian Penal Code Indra’s actions would attract Section 497 of the IPC! And Ahalya would be protected by the Indian State.

Modern India has come far from the times of its mythological past, but is still waiting for many of her citizens to catch up to the modern values of the modern world so that they could shape their beliefs and values on the basis of modern knowledge. Let us manage to do that and then we will see what a powerful country India would become!

I wonder why and how those super nationalists who speak of Indian culture and nationalism and the bad influence of foreign culture have no problem with Babylonian and Greek superstitions being part of their Hindu culture? And how come they still do not understand that Indian culture is not Hindu culture alone, but also that of the Atheists, the Carvakas, the Buddhists, the Jains, the Sikhs, the Muslims, the Christians and many others?

Some of the callers during the TV programme were special. ‘What you say hurts us’, one of them said to Mr. Krishna Rao who was in fact very soft and gentle. ‘You do not criticise the Muslims and the Christians’, says another. Which intelligent person will speak of Islam when the discussion is about Pushkar practice? Listen: Don’t like what I say? Then, don’t listen!. Or change the Channel. Don’t behave like a child. And don’t say ‘why did you not criticise the others (meaning Muslims and Christians)’. The simple response is that Christians and Muslims do not have Pushkar, that is all. Further, when the Christians and Muslims have their functions and events, the state does not promote them! Here it is the state doing that!

And we do not organise these discussions, we are guests at sessions organised by TV channels. Yes, the Christians have prayer healings and prayer oils and other deceptions. When a discussion is organised on that subject we will speak. We have previously spoken about that as well. Very often we do not wait for discussions. Remember the psychic healing fraudster Alex Orbito from the Philippines? He was exposed by Humanists and Rationalists when he came to India. and why were all the Hindu celebrities sitting in the audience when he was performing his scam?

If you really respected your rivers none of them would be so dirty and polluted.Take care of your rivers by stopping the pollution.

A guide to thinking

Do not try to make us criticise those you hate. Our agenda and intentions are different.

Most of us propose a modern philosophy of life based on knowledge and Human Rights and Democracy. We simply are inviting you to think about the beliefs that prevail in society. You can do the same about our own assumptions and statements.When subjected to valid criticism, our views would also improve. Our aim and goal should be to increase the level of rational fact-based thinking in society so that all our lives become happier.Ours, and yours. In the contest of ideas there is progress! In fact this is how Hinduism became better – look at how Swami Vivekananda and Swami Dayananda Saraswati and Gandhiji improved Hinduism. All religions need reformers to move forward. If you respect and love your religion you will do it.

There is a clear and strong current in the public mood – 85% of the TVSMS poll (not scientifically organized and the no. of people polled were not announced) said that the Government organizing the Pushkar events on that scale was to distract the people’s attention from their real problems. Whatever you may wish to do, those like us need to protect ourselves and our families from the invasion of superstitions and irrationality.