The Midbrain activation gang was badly hit by our Kozhikode exposure and wanted to make up for that. They went to a famous magician from Kerala Gopinath Muthukad and requested him to inaugurate their next show and promised him payment for that. They had also taken with them a ‘midbrain activated’ child who displayed his talent before this magician who was furious at a magic trick being shown as a display of supernatural powers. He called a press conference after a few days, exposed these people and also met the home minister of Kerala with a complaint about how people were being cheated by these midbrain activation racketeers! That was followed by a series of articles in the leading newspaper of Kerala- Malayala Manorama which came down heavily upon them. This was followed by an exposure by another magician called R.K.Malayath who played a trick on Ravi Lal the so called mentor of the biggest midbrain activation outfit of Kerala called Abha International. He was invited to Nilambur with the promise that they had a number of children for joining the course. When he went there with a child to make his presentation, he was totally exposed and shown another presentation which was far superior to his and asked to explain that. He was told that it was being done without any claims of supernatural powers or midbrain activation. He was made to give an undertaking that he would stop this so called midbrain activation! It is sad that this whole process was started by a rival group going by the name Ingenium India owned by Vinoj Surendran and as a consequence of our exposure all the groups suffered collateral damage! 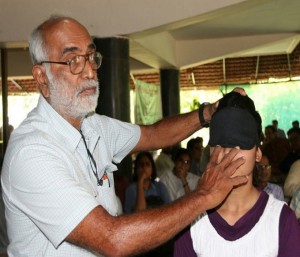 It is not that Abha International was a genuine one! When they were badly affected by our exposure they chose to go the press about organizing an event on the 17th of May at an open air stage where they claimed that thousands of children would be doing blind folded reading in an attempt to create a world record which could be entered into Limca book of records and the Guinness book of world records. We sent mails to both of them and Limca book editor replied that we could rest assured that it would not find an entry into their book and Guinness book replied that before anything could be considered for an entry as a record it would be put to rigorous tests by experts. So ended the plans of these groups to spread their tentacles all over the state. More over once these exposures got wide coverage, the parents who discovered these frauds withdrew their children from the courses and stopped paying instalments! The new franchisees who wanted to get into the business withdrew their applications and the situation became hot for these people. On the 21st of May we have been told that an FIR has been filed against one of these midbrain activation centers at a police station in Thiruvananthapuram at Kerala.

If this is the state at Kerala, in Karnataka things have been happening at a different level. One of the most important breakthroughs happened at Mangalore on the 9th of May. We have held a press meet and programs at Bengaluru and Mysore about the fraud of Midbrain activation. In Mangalore I had an interaction with some children at a summer training camp. Actually my interest in the whole issue had been kindled by a challenge put forward in the summer camp organised last year the same month by my good friend Gopadkar in which one person had challenged to make me a pauper by making a child read the serial number of a sealed note. He told me that that child would have been subjected to Midbrain activation by which they could see though even thick cement walls! This had intrigued me and I had told him that I would accept the challenge and despite several reminders nothing had happened. In this interaction I demonstrated blind folded reading by one of our boys and announced a challenge to any one who could really read through a blind fold. One of the boys who was attending the camp came forward and was ready to accept the challenge. He had expected that I would put the blind fold through which they had been trained to peek through. But I brought out the adhesive eye patches which I pulled out and applied round his eyes. He could not see anything through that and was totally flabbergasted. At that point the other children asked him to see with his third eye about which he had boasting. He admitted that he was peeking and that he had been told by the midbrain activation instructors that the secret should not be revealed to any one as it is a professional secret like that of the magicians! His parents who were from a place near Mangalore had spent Rs.60,000 on sending him and his younger brother to Mumbai for ‘midbrain activation’. He had lied to them too because he thought that they would feel that all the money had gone to waste! So, here we have on record a boy who admitted to what had happened. We promised his parents that we would help them to pursue the case if needed, but they were reluctant to do that as a known person had been the intermediary!

On the 12th May we had a half day seminar at Karnataka Rajya Vigyana Parishat at Bengaluru on theme- ‘Midbrain activation – a fraud.’ In this seminar, I presented notes about our campaign, showed videos of the performances and also put forward our challenges to demonstrate blind folded reading under fool proof conditions. A broad outline of which is as below:

In this seminar Dr.C.R.Chandrashekar, an eminent psychiatrist, Nakul Shenoy, magician and mentalist, Dr.Vasundhara Bhoopathi also spoke. There was an ex parental counselor who was earlier under the employment of a midbrain activation outfit. He spoke to the audience about how these outfits were misleading the parents. There was also one parent who tried to disrupt the proceedings by claiming that his daughter who had been ‘midbrain activated’ was capable of blind folded reading and so on. At Mangalore the Midbrain activation outfit whose advertisements evoked my interest in the topic has now stopped its campaign. Meanwhile in the neighboring state of Goa, the ‘Midbrain activation’ process could never take off as it was nipped in the bud by the Panaji based Goa Science foundation who called a press conference as soon as an effort to start this activity was made.

At Tamilnadu the campaign was started with a press meet and demonstration at Erode, in the last week of April. The importance of Erode was that it was the place where the great rationalist, humanist E.V.Ramaswamy had started his anti superstition campaign almost eight decades back. The same day we had a demonstration at a state level science camp at nearby Namakkal. This was organized by Tamilnadu Science Forum, a body devoted for the development of scientific temper in the state. Its president Dr.Mani and various other activists have played a very active role in the issue. On the 28th of May, a state level workshop was conducted at Palani to train the activists of Tamilnadu Science forum to expose the claims of the Midbrain activation shops. In fact one of the owners of such an outfit called S.I.Pandyan had challenged us that the children would show us a number of ESP related items. But there has been no news of him since. 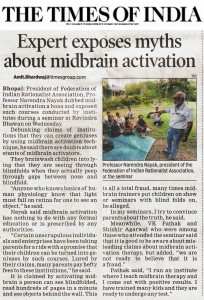 In Madhya Pradesh where we had a press conference and meeting on the 13th of May we were almost physically attacked by a mob of midbrain activators! They also thrust forward one of the instructors who had come with grease applied around her eyes and managed to get a peek through the eye patch. Which proves that ,we have to have more foolproof methods for blocking the vision. So now we have designed a hood for the same. On the next day we had another press conference and demonstration at nearby Itarsi. Since we do not have a proper base at Madhya Pradesh, we have to build up such a base before we can have a greater impact there. We were told that this Midbrain activation is a big business there, with people like doctors running such outfits.

At Punjab and Haryana we have the Tarksheel society who are very vigilant about any such activities. I had received a mail from one Jasmeet from Chandigarh who says that he is running such an outfit but is very confused about what is happening. We have put him in touch with our activists there and are awaiting the outcome.

In the meanwhile there are some proposals for workshops to be conducted at the all India level for our activists in the field and there are two such- one for the North and the other for the South. The Northern one proposed at Delhi and the one for the South at Bengaluru. This has come from Dr.Anuj Sinha the former head of NCSTC and present chairman of the NCSTC network. We are also working on a small booklet with write-ups from various experts in the field to make people aware of the issues.

Well we have been accused of a number of things including cruelty to children and I do feel that some sort of clarification would be in order. It is very sad that children are being used as pawns by the greedy parents and the shopkeepers of the Midbrain activation lobby. As I have already mentioned, when a chubby cute child is pitted against a crusty old man there are no prizes for guessing where the sympathies of the onlookers will be! It is clear that the children are being brainwashed into lying. The parents are forbidden from attending the workshops along with the children under the guise that it would distract their attention but once this process is over they are encouraged to bring other children under a multi level marketing strategy. Once trapped into paying and bringing others into the fold, of course for an incentive, the parents are also co-conspirators! At the first such public encounter at Kozhikode, I told a parent of a girl that she would be humiliated but the mother was insistent that her daughter go through the test and when she failed the girl wept and I felt miserable. Of course this can be used by the opposite camp to say that we are harassing the kids. Another argument of this group is that a lot of money has been ‘invested’ on the creation of infrastructure- well if that has been done we cannot help it. Before they did so they should have the common sense to think whether it is possible for anyone to read through a blind fold! Coming to the blindfolds we are asked as to why we are harping upon this blind folded reading when there are umpteen other benefits from the process. While we would have no objections to any benefits accruing from it, the only achievement that is being touted is that children can see through blindfolds and zillions of videos are being circulated on you tube and elsewhere about the same! When one bases the whole story on a particular base-the shaky foundation has to be tackled to bring down the edifice. Now we see other lobbies entering the field – the so called godman Nityananda has started showing off children doing ‘blind folded’ reading; some are claiming that it is being done by ‘yogic’ powers and such.

About the pseudo scientific claims and its founder Makoto Shichida and other such science related issues we will be taking up later. As this is going on web we are planning to take the campaign to Maharashtra in particular to Mumbai.