It is that time of the year when parents look for classes that would keep their children engaged during the summer vacation. The one doing the rounds lately has the right mix of ingredients to ensnare parents and to make them spend money to ‘activate the midbrain’ of their children. Advertisements have started to pop up in many cities wherein fantastic claims are being made. Did you know that the mid brains of your children are not functioning to its potential? Do not worry as there is a solution for this problem. An organization called as Spoorthi MBM foundation has come forward to take up this stupendous task. After achieving success in Malaysia, Hong Kong, Singapore, Taiwan etc., they have come to India and then to Bengaluru and later Mangaluru. The contents of the blurb is quite long and predictably quite vague. Terms like ESP brain window, ESP photographic memory, brain enhancement training, quantum speed reading are all thrown around and all of these are for children. But adults, do not lose heart because for those between the ages of 19 to 60 there is a ESP brain window energizer workshop where they will be taught ‘energy exercises, eye ball exercises, meditation, energy generation exercises, focusing exercise. This will boost up your energy levels in your body based on oriental health theory that help promote overall circulatory wellness. We help you to release your stress.’ So claims the brochure! 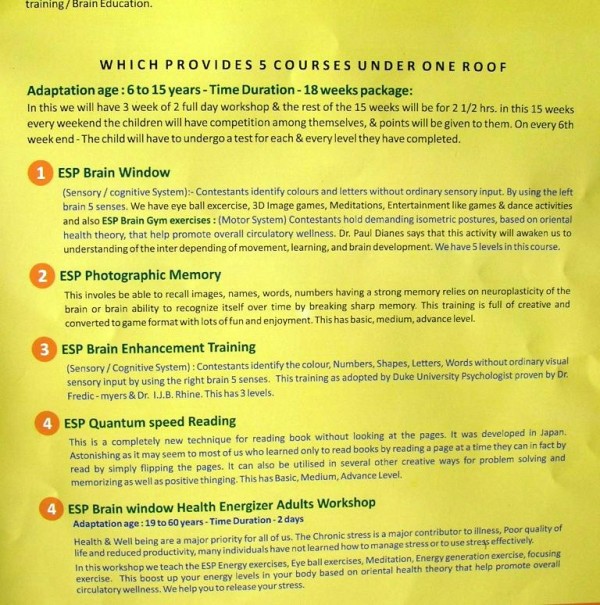 Though there are quite a lot of claims in the above brochure — what interested me most was the ESP brain enhancement training — contestants identify colours, numbers, shapes, letters, words without ordinary sensory input by using the right brain’s five senses. This technique has been adopted by Duke University famed J.B.Rhine whose methodology was totally suspect! In fact he was so gullible that he was taken in by a ‘wonder horse’ which was doing arithmetic by signals given by its controller! There are innumerable such errors pointed out in his biography on Wikipedia.

My first brush with this MBM was about year ago when one of the members of the audience at an interaction for children had challenged to make me a pauper by making a child read the number of a sealed currency note. That was in response to a challenge for those having supernatural powers — one of which is to read the serial number of a sealed currency note. MBM claims that children who have completed their course can see up to hundreds of kilometers. Though a year has elapsed numerous attempts on my part to achieve bankruptcy have come to a naught, as he has not obliged me so far! So, now is the time for that as MBM has set foot in Mangaluru. The arrival has been in September,2014 and from the information gathered only 15 children have been admitted to this course. But, like all good things in life MBM does not come free one has to pay a cool 25 thousand rupees for this enlightenment. 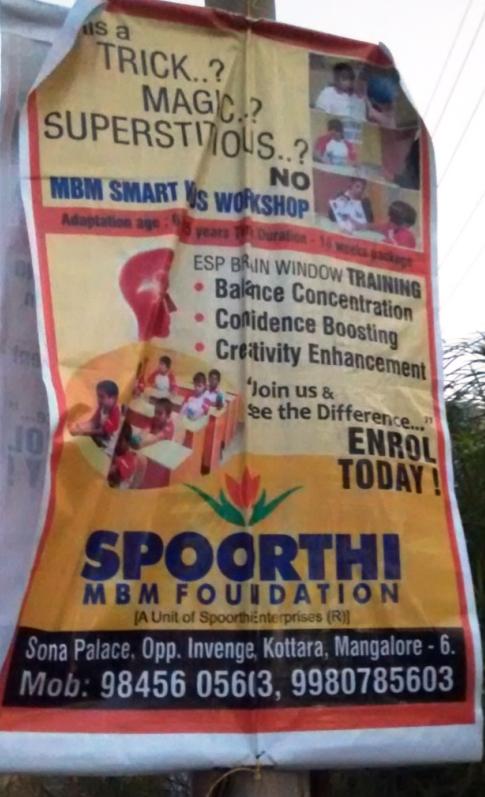 Since their banners all over the city promise that it is not a superstition, we would be glad to put their claims to the test of reason — in fact two of them — one on ESP brain window where “Contestants identify colours and letters without ordinary sensory input. By using the left brain 5 senses”. The second promises the same using the right brain input. So, here we are creating children who have extraordinary powers who can identify colours and letters without any sensory inputs! That is, they can do that without seeing, touching, hearing, tasting smelling them! This is precisely what I would call as a superstition. Hence, we were waiting for an opportunity to put this ability to the test of reason.

My correspondence with the advertisers did not elicit any concrete response. They said they were not interested in any awards to which I replied:

It is not an award but an open challenge to your organization to prove your claims. Your statement about blindfolded reading is false. I have seen your facebook page which is full of videos claiming children reading colours and letters peeking through gaps in the blindfold. I have also seen a photo of a girl identifying colors from behind a wall.

The only other postings on the page are about opening new branches and other ads. We shall be continuing our investigations into your claims. It is upto you to respond.

Then they invited me for a live demo at Bengaluru and as I did not have the time I told them that two of my friends would attend. In my mail to them I also said:

Making children peek through so called ‘blindfolds’ is promoting quackery. The claims of ESP, the common meaning for which is extra sensory perception is a statement made to hoodwink gullible people. I am making these strong statements based on the brochure printed by your Mangalore franchisee which I am sure is based on material provided by you. Since the claims on that have been made at Mangaluru the same should be put to the test of science here. About a year back someone from Bengaluru had made challenge to me that he would make me a pauper by making a child read the number of a sealed currency note by the techniques taught by you. I had contacted him a number of times and asked him to go ahead but it never happened so far.

However the claim by you that there are going to be no blind folded demos is indeed strange coming from a business organisation whose brochure sports such pictures and whose web site carries numerous videos and clipping from many TV channels about the same.

I have already exposed one such years ago and you can check that here.

If my people are willing to come to your demos I will get in touch with you without any commitment on our part about the genuineness of your claims or a testimonial to you. They will be just observing things. If you want to prove your claims of children making observations about colors, letters without any sensory inputs whatsoever you will have to come forward to demonstrate them under my conditions. These claims have been on your brochure which is an offer document made to public.

I challenged the Spoorthi foundation through my article in Mangalore Today to come forward and take up this challenge by bringing forward the best of their products of the MBM workshop for proper testing. I made some queries with psychiatrists, child psychologists, educationalists and people who train specially talented children. They have not endorsed it at all. In fact, it was remarked that teaching the children to peek through the gap between the nose and eyes, and claiming it as blindfolded sight would encourage children to cheat in the future, and think that it is a normal, acceptable thing. Moreover young children might be pressured by social conformity to claim that they could ‘see’ through the blindfold. The peer pressure to follow what other children claim could be one reason for why young children act as if they could see through the blindfold.

There are two aspects which would confront us here.

While claims of stimulating the mid brain to bring about extraordinary mental powers have been going around from past few years, the frenzy is now reaching epidemic proportions. There are a number of such enterprises offering such courses in a number of cities in India; the mode of seeking publicity and also attracting clients is through handouts, making a number of wild claims with pseudo-scientific jargon being used freely to attract gullible parents. 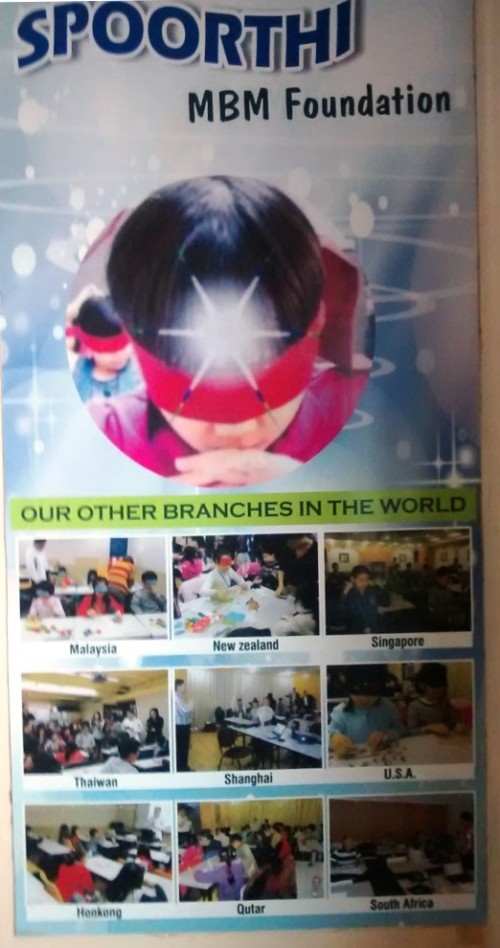 A poster of Spoorthi MBM Foundation

In response to the invitation of Rajiv Ahuja of Spoorthi foundation, we had sent two activists from Bengaluru, freethinkers Dolly Koshy and Atheeb, to visit their premises on the 1st of March. They were not allowed to investigate any of the children, they were prevented from questioning them, and were not allowed to take any photographs either.

The famous blindfolded reading technique was shown to them, and when Dolly performed the same, she was accused of peeking through the gap between the nose and eyes. When she replied that the same was being done by the children, she was attacked!

The whole edifice of this so-called Mid brain development rests on their claims of being able to make children read blindfolded! They post videos of these on their Facebook pages, make claims on media about such feats, try and get their names into books of world records and such. One such link to a report in the New Indian Express can be accessed here. It claims that a girl of ten years performed feats of blindfolded reading which is a ‘world record’ of some sort, in the august presence of some VIPs, which included a judge of the Andhra Pradesh High Court.

However, this stimulation of mid brain activity is no social service. It is a totally commercial activity promising ‘high returns’ to franchisees, charging a cool 25,000 rupees for those who are gullible enough to admit their child to the course.

The activation is possible only for children between five to fifteen years of age! All their ads and blurbs feature cute kids! One can wonder why — the answer lies in attracting people and having excuses to prevent any proper investigations into the claims — in this example, when a crusty old, balding, grey haired, bearded old man is pitted against a cute ten year old who can always burst into tears when the going gets tough, there are no prizes for guessing where the sympathies of the onlookers will be!

The whole purpose of making claims with kids performing apparently amazing feats of blindfolded reading is to prevent any proper investigations into the claims. When Limca book of world records was contacted, they replied that there was no such record in their books, but they were willing to consider it. The editor also added note that she had witnessed one such blindfolded display, and had been surprised by the unique talent exhibited by the child. Like many others, she too had not bothered to check the effectiveness of the blindfold.

This Mid brain stimulating activity had been going on all over the country from quite some time. Some of our organizations in Maharashtra have already exposed the same, and have even offered awards to conduct the same under controlled conditions.

Since the Mid brain masters are a commercial undertaking keen on getting more and more customers signed up, we had already made an offer to them of Rs. 5 lakhs, if they could prove that their students can read things under fool-proof blindfolded conditions that we shall enforce. We have been told that they are not interested in awards! But, as a commercial enterprise, they must be interested in getting more customers!

So, we herein agree to sponsor two hundred students from socially and economically backward sections of the society studying in govt. schools for their program, if they can prove their claims of children seeing things blindfolded. However, the tests shall be conducted under conditions to be specified by us. This is because we want to help these children stimulate their mid brains and come up to the high standards claimed by the enterprise marketing this scheme. Since the offer document for the course states that children can ‘identify color, shape, numbers, letters without ordinary sensory inputs’ , we would like to conduct fool-proof tests for the same with material provided by us including blindfolds.

These trials will be conducted at Mangaluru in the presence of media, and the specific conditions shall be laid down by us. The date for this is tentatively fixed for the 14th of April, since it happens to be the birthday of Dr. Ambedkar, the architect of the Constitution of India.