After studying at IIT Kharagpur and later Louisiana, Namit worked in the Silicon Valley for many years. He returned from California to settle in India in 2013. Namit is a travel photographer and avid blogger. His review of the book Joothan by Omprakash Valmiki won the 3 Quarks Daily 2011 Art & Literature Prize. He had come from Delhi NCR with his partner Usha Alexander, a writer, for the meet and they were received warmly by the members. 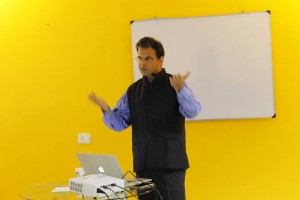 Namit is familiar to many of us in Nirmukta. His articles, especially the one ‘On Caste Privilege’ is quoted time and again in our discussions in Facebook groups. His topic for the day was ‘What do we deserve?’ He pondered on what rewards and entitlements can we fairly claim for our learning, natural talents and labor. Namit started by listing and discussing the factors that influence what we are and he pointed out how almost none of those were what we could claim credit for. The list included Caste, Gender, Role models, lucky breaks, market shifts, Family work ethic etc.

He explored the concepts of “merit” and “success.” Namit presented three models of economic justice by which a society might allocate its rewards—libertarian, meritocratic, and egalitarian. He talked about these distributive models of justice with examples, Rawls’ Difference principle and Rawls’ Veil of Illusion. He drew from Michael Sandel’s ‘Justice’ and gave examples from India as well as from the USA. The talk was followed by a vibrant interactive session when youngsters had thoughtful and probing questions that delighted Namit. Namit’s talk has been recorded and the video will be made available soon. 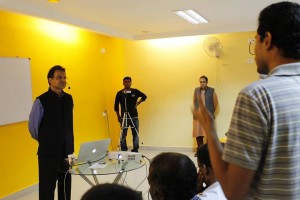 Our meets have always been learning experiences. We are aware of our ‘privileges’ and we frequently question our privileges. We had a discussion with film maker Amudhan two year ago after watching one of his films which was an eye-opener. We learn Science, we discuss atheism, we debunk superstitions and we thrash out pseudoscience, alternative medicine and so on. But the sessions where we question our privileges keep us grounded and increase our awareness. Namit’s session was gentle and yet it succeeded in making us uncomfortable. He gave us the Indian perspective to the concept of ‘privilege’ i.e., unearned advantages which Allan Johnson and Michael Sandel talk about in detail. Namit had a gentle way of ruminating about difficult topics not by putting us in a corner but by pondering on his own privileges and thereby making us think. His usage of ‘we’ and ‘us’ was a subtle way of making us question our own privileges and sense of achievement if any. At the end of the day he left us wondering how we can strive for an egalitarian society that would be the most fair for everyone. This particular talk ‘What do we Deserve?’ by Namit Arora is one talk that should be given in all our higher educational institutions, particularly in the so-called elite institutions like the IITs and the IIMs. 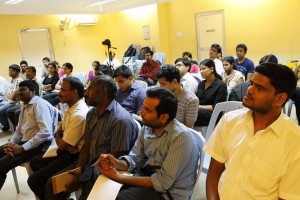 After a lunch break where there was a lot of interaction and catching up by our members we gathered for the next session. Kalpana Karunakaran was introduced by Neethi Seenivasagam. Kalpana is an Assistant Professor in the Department of Humanities at IIT Madras. She has been working on gender issues and on the issue of microcredit with self help groups. Her topic was ‘Capitalism and Women’s Labour: Historical Perspectives.’ 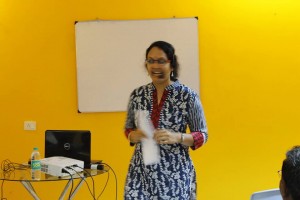 Kalpana traced how women’s work and perceptions of women’s work have evolved and changed through the centuries. She mused how women these days are depicted mostly as ‘consumers’ and how the reality that women have always been laborers has been erased. She started by tracing the origins of Women’s day and went on to talk about how our ancestors were hunter-gatherers and women’s contribution towards gathering and hunting was almost forgotten. She spoke about the witches who were actually healers and were burnt at stake in public places with the connivance of the religious bodies as well as the administration. She described how the requirements during the Second World War brought women into the industries and how it was portrayed during those days. Kalpana spoke about how capitalism glorified women’s responsibility as a housewife thereby ensuring that women take their roles seriously and free men from household work to be employed in industries with inadequate wages. She pondered how the household work was devalued and was assigned no monetary value thereby treating it and the women who were working on it as insignificant. 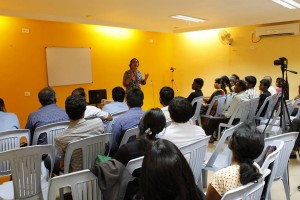 Kalpana recounted how Florence Nightingale was initially treated by the doctors and how subservient she had to be for ensuring acceptance.She deftly weaved the untold stories of women as farmers, healers, laborers etc., and wondered how all these were systematically erased from history. She added that the industries, till date, including the software industry, have ignored that a woman’s body has a reproductive role and had framed and organized themselves without taking the women into consideration. So much so that a woman who needs to take a break to fulfill that role often comes back to see that she has been dispensed with and is not welcomed again. A woman who is keen on her career has to work around this disadvantage if she chooses to fulfill her reproductive role as well. It is to the loss of every human being not just the loss of the women that a woman’s productivity is crushed. 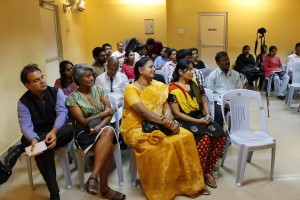 During the Q&A session, Kalpana discussed the issue with an Indian perspective. She also answered questions about how girls and boys were treated while growing up and how it impacts them later. Kalpana’s talk was refreshing and covered women’s history in a nutshell. She showed us interesting images of women from different eras. Her talk has been recorded too and would be made available soon.

As a token of our appreciation to the speakers we presented them the books – ‘Gypsy Goddess’ by Meena Kandasamy which was about the Kilvenmani tragedy and ‘One Part Woman’ by Perumal Murugan. It was our way of making a statement that Nirmukta supports Perumal Murugan and endorses his freedom of expression. The day came to a close with a vote of thanks by Soorya Sriram and with a warm round of applause to the speakers. Yet another Thinkfest drew to an end and we look forward to many more such enlightening sessions and spirited conversations.