What I saw on a white board at a school in Mysuru took me back to my days as a teacher of biochemistry, classes on nutrition and a lot of other stuff. It also awoke the consumer activist in me, and the myth buster too! The blurb says that 1 spirulina is equal to 10kgs of vegetables/fruits besides making claims of it containing all vitamins from a to z! Is spirulina what is claimed to be? How the peddlers of quack nostrums are taking gullible people for a ride and using scientific jargon to fool people needs to be pointed out so that one could be cautious on spending hard earned money for dubious stuff. 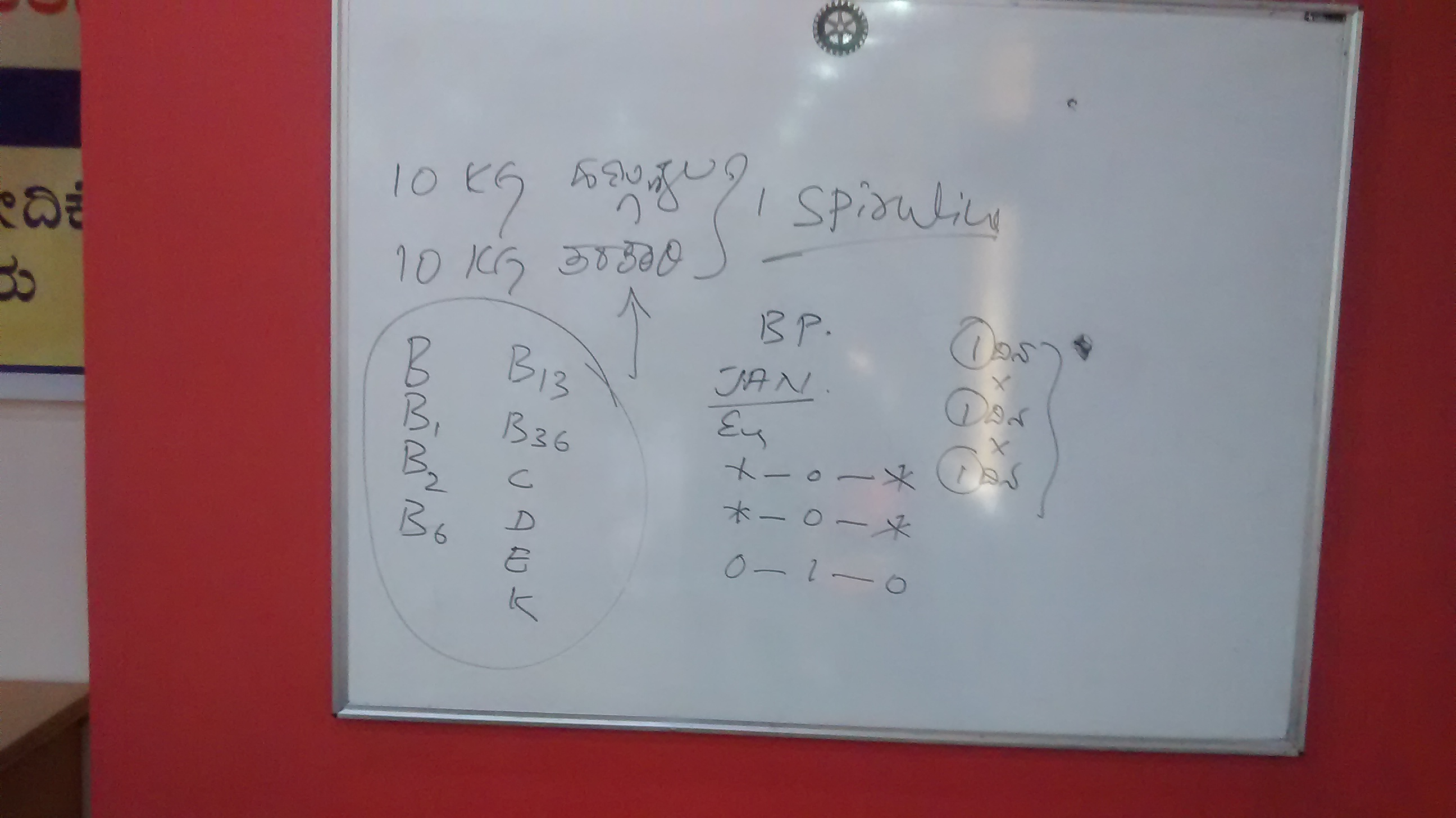 What is spirulina? Quoting from Wikipedia:

Spirulina is a cyanobacterium that can be consumed by humans and other animals; there are two species, Arthrospira platensis and Arthrospira maxima.

Arthrospira is cultivated worldwide; used as a dietary supplement as well as a whole food; and is also available in tablet, flake and powder form. It is also used as a feed supplement in the aquaculture, aquarium and poultry industries.

This apart, can spirulina live up to claims made by the peddlers of what they call as nutraceuticals, naturopaths, alternative medicine ‘consultants’ and a host of other quacks? Capsules of this are being peddled by ‘experts’ whose knowledge of nutrition is gained from the dubious literature peddled by the dealers of these preparations it claimed to be an excellent source of dietary protein, vitamins, antioxidants, zero cholesterol and such. How many of these are supported by evidence? From a source of cheap protein how it has become more expensive than the best of dietary protein are the points to be raised here.

Here is the composition of spirulina (Source: Wikipedia):

And mind you the quantities are in units per 100 grams of the dried powder. So, does this stand up to the claims made by the vendors? Let us examine these points one by one.  Don’t go by the long list of constituents because we could make one such for any item of dietary use. If one were to use this as an exclusive source of energy- you would have to consume half a kilogram of it to meet your daily needs!

While the protein is of good quality it is not the best. The best protein is egg albumin whose arbitrary biological score is 100 and all proteins are rated by this score. While a gram of egg protein would cost one around a rupee the same quantity as that of spirulina would cost more than ten rupees assuming that one takes it in the form which costs Rs.2.50 for a 500 mg capsule in India. Is it a remedy for anything at all? The information lies here. In this it has been mentioned that the protein of spirulina is thirty times more expensive than the best one available in the market!

It is also claimed to be an excellent source of vitamin B. Well, what is vitamin B? For the uninitiated, there is nothing called as Vitamin B! The term vitamin B complex applies to a group of water soluble vitamins which were put under a common class since they were water soluble and as more and more of them were discovered a system labelling them with numbers started and hence we have the vitamins prefixed B1 to Bn. But as the chemical composition of these entities came to be known, the system was stopped. However the peddlers of quack remedies have still stuck to the old ways as their information on nutrition is confined to what they have been spoon fed by their so called trainers in a system of self perpetuation of half baked information with an eye of taking people for a ride to peddle their concoctions.

So, a product which was meant to be a cheap source of nutrition has become an expensive nostrum converted into that by an industry out to make profits by exploiting the gullibility of humankind. Well let us take a look at other claims too- spirulina is claimed to be zero cholesterol- yes it is! The same claim is put forward in a number of ads of vegetable oils and they are very right too. But if you take a good look at the composition of these it would clear that cholesterol is only an animal sterol and not a nanogram of it would be present in any vegetable source(of course ghee, butter, milk fats though are claimed to vegetarian, strictly speaking they are fats of animal origin and contain cholesterol). So, this claim is right after all.

But, these apart does any evidence exist as to make it a panacea that it is claimed to? Sorry to say it does not. Except for the claims made in the blurbs of the peddlers and dubious sites of ‘alternative medicine’ there seems to be little evidence to support the hype that spirulina can be anything but a cheap source of nutrition as it can grow without any fuss. It does not need much to grow except an alkaline medium and salt supplementation if grown in fresh water. If done in sea water it would not even need that as the sea water contains enough of it. The concoctions peddled by the alternative medicine, nutraceutical, direct marketing lobby falls flat as the dried powder of this is many times more expensive than the best of dietary proteins of better quality. As for the hyper doses of water soluble vitamins present all they can do is to be flushed down the drain as consuming in excess can do very little except getting them excreted in the urine! As for its taste it goes a by a common myth- that is something is to be good for you it should taste vile and that is reason why it is peddled as capsules to mask it. Any way one of it is claimed to equal to 10 kgs of vegetables/fruits! Finally if our vedic ancient knowledge lobby could try, they could always claim that it existed in our Vedas and it was discovered by a Spiruraj Maharshi and hence called as Spiru lina and our ancient ponds and tanks were full of it!