Children being the most vulnerable section of the society are very often the worst victims of atrocities linked to superstitions and thereby religious beliefs too. A child is born as a human child but as it grows up is subjected to various forms of brain washing which includes the pet superstitions and prejudices of the environment where it is brought up. This could include the parents, the relatives, teachers, the caste etc. As the child grows up these do not get questioned but get stronger since they are reinforced from all sides. If the questioning starts at a young age and suitable answers are given then the child could end up being a humanist. But, the environment in which the child grows would not give scope for that. The pet prejudices of various religions, castes, groups etc. are the result of indoctrination at a very young age. 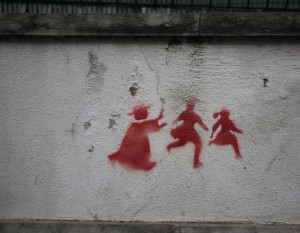 When we view the child and superstitions we can see two aspects of it- one is the child as a victim of superstitious practices and the other is as a perpetrator of such. If we are to go by the recent massacre of children at Peshawar by a group of Talibanis it is the former that comes into the picture. The abuse of children for and in the name of religions and related superstitions has been going on since time immemorial. It could be anything from circumcision of the male infant to the genital mutilation of the pre-pubescent girl child. It could be something like forcing sex on a pre puberty girl to sacrifice of a male child in quest of a male heir for an infertile couple (it could also include ones who have girls only, for a male child is a must for the Hindu parent to be dispatched to heaven after death and fed periodically each year too)! Well, one could also include the pedophilia of the priestly class in this too. The Hare Krishna movement and the Catholic priests are good examples of this. The initiation of the child into religious orders is another example of child abuse. The child unaware of what it is getting into is forced into religious orders and is made to devote the rest of its life for the religion into whose service it has been earmarked without any consent from it. The Christian (the Roman Catholic) orders have now got out of it but the same continues with Buddhists and Hindus. 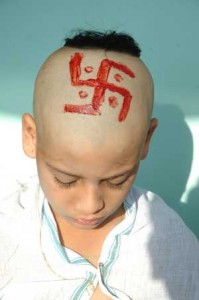 Child with a Swastika on tonsured head
Image source: Wikipedia

While children have fertile imaginations these could be used to enjoy fairy tales and mythology or force religious bigotry upon them by vested interests. Children who have been so indoctrinated could be used for nefarious activities which could even be suicide squads. It also makes the child very vulnerable to ‘supernatural’ manifestations like ‘spirit’ possession, extra sensory perception etc. Many ‘child saints’ are the results of these. Hallucinations due to such indoctrination are called as visions and religious significance is attached to them and the child becomes a manifestation of imaginary supernatural powers. In parts of Kerala and coastal Karnataka the term kuttichathan is used for a child spirit and poltergeism is applied to their pranks.

Well, let us take up a few cases where we have taken an active role in solving them. There have been such phenomenon twice at a place called Adyanadka near Mangalore both of which were being done by children-adolescent girls. A recent one was at Nettarakere near Mangalore where an eight year old boy was doing these things. In Mangalore I have solved the case of a teenager who used this to cadge desired things from his doting grandparents. There has been a case of mass hysteria at Kervashe near Karkala where girls were showing signs of possession which we could accurately diagnose to have sexual undertones and it turned out to be so. 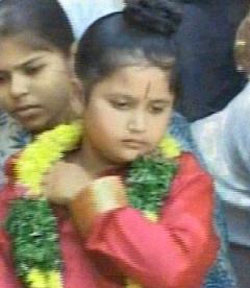 We could also take up the case of Shambavi, a six year old, said to be a reincarnation of Maitreyi, friend of Dalai Lama in his previous incarnation! Preparations were on to establish a Mutt in her name and she was being taken care of by a lady who claimed to have found her in Varanasi. When we challenged that she changed her tune and said that she was her daughter! A complaint was filed with the Human Rights Commission stating that the place of the child was in a school and not in any religious place. This campaign caught on well and the Commission ruled that her place was in school! Dalai who was supposed to inaugurate the religious institution developed cold feet as he did not wish to be involved in a case of child abuse and backed out!

The exploitation of children for superstitious inhuman practices has been happening in Karnataka, since a long time. In Chandraguthi near Belgaum young girls are dedicated to the goddess Yellamma(in other words to a life of prostitution). In temples near Vijayapura children are thrown from a height and caught in blankets. In Gulbarga there are instances of child sacrifice, burying of children up to the neck in pits during eclipses etc. If one would think that this happens only in so called ‘backward’ areas you could be wrong! Such an incident had taken place in the heart of Mangalore several years ago in which a five year old girl was sacrificed by a father and daughter duo. 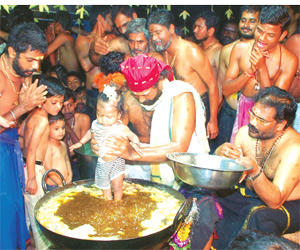 I could also recall one incident connected with a so called miracle in which a man, a Ayyappa devotee was photographed dipping the feet of a child into ‘boiling’ oil and claiming that it was due to the protection of Ayyappa that the child’s feet were not being burnt! On seeing that I panicked not because of his ‘miracle’ but because of the fear that some other gullible devotee of the same god could perhaps try to do the same with real boiling oil! So, I had to rush to the Press to debunk the miracle adding that no one should try to replicate that. Luckily this was well publicized in the newspapers and such an incident did not happen.

All this comes from an attitude that the child is the property of the parents and the religion into which they happen to be born into. Some of the sects and cults have even denied treatment to children citing religious convictions, while some do not allow even vaccination. Oral polio vaccine campaign had some setbacks as some members of the so called ‘minority’ communities were misinformed that this was to make their boys sterile in the future! Many religious leaders too tried to reinforce this superstition. Again, religious factors too play a role in sexual abuse of children. When a young girl was sexually abused by a Mullah at a village near Mangaluru the case was about to be hushed up claiming that it was a matter inside the ‘community’. The sexual abuse of young boys by the priests of the Roman Catholic orders was put under wraps for a long, long time.

While one is free to practice one’s religion, enforcing such on minor children and subjecting them to ill treatment is a violation of the rights of the child and should be seen as such and not as a matter of personal choice.