If I may be pardoned for the play on these Kannada words which are also the titles of two of the famous books of Jnanapita award winner Dr.U.R.Ananthamurthy popularly known by his initials, I will elaborate on the choice. Avasthe means disorder in Kannada and samskara is the abbreviated word for antya samaskara or the last rites performed before the disposal of one’s mortal remains! Well, URA was well known for his controversial remarks, his fearless speeches and his very famous works of fiction in Kannada one of which roused the whole Brahmin community against him. Well the Brahmins could understand the others criticizing them. But, that coming from one of their own — it was sheer blasphemy.

URA’s samksakra was the fictional account of one Narnappa who was residing in an agrahara — a sort of ghetto of the Brahmin community who took to non Brahmin ways — he started eating meat, drinking spirits and fornicating with hold your breath — untouchables! This roused the wrath of his community who wanted to evict him from their stronghold but could not do so due to the legal right that he had on his own property. Then comes an epidemic of plague and the death of Narnappa. The death of this Brahmin is the theme of the whole work — a brahmin’s remains can be only cremated by his own community — well, here comes the dilemma — when one who has committed all the non—brahmincal sins that one is capable of, can he still be called a Brahmin? Again, the tradition is that when there is a dead body lying in the agrahara none can eat until it is cremated as it is considered as pollution of the whole community! The whole scenario is that of confusion and while Narnappa’s remains lie putrefying, the debate on what is to be done rages on and Praneshacharya who is supposed to be a repository of vedic wisdom and also looking after his bedridden wife. Into this scenario steps in Chandri, the consort of deceased Narnappa and is followed by the usual biological attraction between the two of them and much pent up sexual desire of the repository of vedic wisdom finally finds an outlet! How the last rites of Narnappa take place and the rest I leave to suspense, but one sentence of the novel that “though Narnappa left Brahminism, brahminism did not leave him” applied to URA as well! Though he was opposed to such rituals and expressed that in no uncertain terms, his remains were consigned to sacred fire and there were vedic rituals with chanting of mantras and all the rest! Well, disorder or avasthe is the title one of the famous novels of URA about the life of Shantaveri Gopala Gowda who was the doyen of the socialist movement in Karnataka and almost became the Chief Minister. Again, this novel deals with how this highly principled man changed his ways in his last days. When it was made into a movie it generated a lot of controversy and was almost banned. 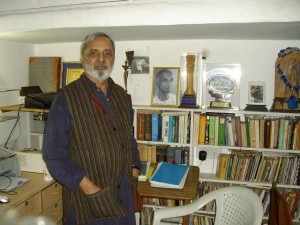 URA never minced his words and was free with his comments on issues on which he had strong feelings. After a distinguished career as a novelist, academician, a head of the department of studies on humanities, he turned to Gandhi and was taken up by his teachings. My first meeting with him was at a meeting at Cubbon park, Bangalore about two decades back when we shared the platform at a meeting of a dalit organization. The second time was when he was one of the eminent academicians at the center for humanities of the newly formed Manipal University which had organized a meet on Gandhism and its relevance to modern times. I went up to him and told him that though he may not know me, I knew him mainly for his work samskara and asked him as to how a person like him could get along with the Pais of Manipal who were so reactionary in their thinking and practice. He threw up his hands and said that is a good question I myself don’t understand how and walked away! The third time was when I met him at a mutual friends place at Belthangady and when we were introduced he said yes, Narendra Nayak — the rationalist and said that he knew about my work.

Last time he made a controversial statement was when he said that he would not like to live in a country where Narendra Modi was prime minister before the Lok sabha elections and following the victory of BJP was sent a ticket to Pakistan by the saffronites. Again, when his remark about urinating on statues of gods was quoted by someone else, there was another controversy though it was short lived. However, it gave grist to mill of those elements who said that because of these two remarks his end came! They said since he did not like to live in a country were Narendra Modi was Prime minister, he had to leave the world itself and due to the remark about urinating on statues of gods he ended up with kidney failure! They burst crackers and distributed sweets in some places showing their uncultured boorish behavior of celebrating person’s death that too at a ripe old age of 82 years by chronic renal failure. In some places the police had booked suo motu cases on those who had done it but more than that it shows the fear that people had of an old man. If one had to celebrate a person’s demise, it is because that person was a threat to them when alive.

However the way the mortal remains of URA were treated with all religious rituals connected with the community into which he was born smacks of compromise by the living for the sake of ‘prestige’ in the society! The inane excuse was that he expressed a wish to be cremated as per the brahminical rites, but those who knew him would hardly agree with that. We who think differently from the so called ‘society’ into which we were born have to be very careful about the way we are treated after death because we do not have any control over that! Late B.Premanand had taken great care to see that his wishes would be complied with after death. He had entrusted me with the task of seeing that his body would be donated to the medical college after his death and no religious rituals would be performed and we had seen to it that allegations of last minute change of heart do not come up. Because, usually the other side would like to spread the word that atheist had a change of heart on the death bed!

But, however U.R. Ananthamurthi will be remembered for his thought provocative literature and his forthright views on many subjects. Though he is no more, long live the ideas for which he stood for! As for the celebrations of his passing away, it shows how cheap and low grade are these people who were so scared of an 82 year old diabetic with end stage renal failure! It would not do harm to repeat this, as these cheap publicity mongers deserve it.