Thirty two Chennai Freethinkers meets have gone by during which I was an active spectator and passive participant – witnessing the various activities from the comfort of my private space, observing, learning and watching like a passenger looking through a window during a long train journey.

On 20.07.2014, for the first time I ventured to attend a CFT meet which had been arranged jointly with Catalyst Study Circle. The programme was a bilingual discussion by a panel of Tamil writers: Ms. P.Salma, Ms. Brindha, Ms. Kavitha Muralidharan and Ms. Parameswari. The topic of the discussion – the magnet which drew me to the CFT meet was ‘Challenges faced by Women in Social and Literary spaces.’ I had heard an interview of Ms. P. Salma and was impressed by her speech and her ability to articulate her ideas. But the fact that I do not know Tamil and have not read the works of the panelists made me wonder whether I should attend .

I finally gave in to the desire to listen to their views and made it to the meet. The moderators of the panel discussion were Geeta Charusivam and Deepa, both social activists doing excellent work in their own fields.

The moderators began by introducing the panelists. Salma is a well-known name to readers of contemporary Tamil literature. Salma’s articulation of desire and sexuality as well as the emotions that animate the domestic space every day has made her occupy an unique place in Tamil literature. She has also been a committed public servant. She was the elected President of the Ponnampatti Panchayat and has also served as the Chairman of the Social Welfare Board, Govt. of Tamil Nadu, during which time she was instrumental in establishing several welfare schemes, including some landmark ones directed towards the transgender community. She stated that it cost her on the personal front to fulfill her aspiration as a poet. She did not use her original name for her work. When it became known that a muslim women was writing such ‘unconventional stuff’ there was a severe backlash. Salma explained how women are expected to conform and how transgressions are viewed and punished.

Brindha is a poet who has published several poems in literary magazines. She had written down the matter she wanted to convey to the audience and read it out. She appeared reticent but when questioned she looked at us straight in the eye and delivered her views which were crisp succinct, sharp, accurate and to the point without mincing or wasting words.

Parameswari is a teacher by profession and has written several poems and essays. Her talk was down to earth and echoed the simple yet unfulfilled desires of many of us. She immediately struck a chord when she said “Chinna chinna aasai! (small desires) – To be served at home freshly made hot dosas directly from the tawa. It is still a luxury for most women.” Each and every wish, simple or otherwise has to be obtained by women through, agitation, continuous protest and sometimes by force even if it is rightfully due to us. She shared her experiences as a teacher at the rural state run government schools where she teaches the 11th and 12th standard students. She shared many interesting and insightful experiences, the change in the mindset of the youngsters brought about by the influence of media, technology etc., She felt that children are more receptive to change and progress when compared to adults.

Kavitha Muralidharan, a poet and a journalist, stated that in media, often, a woman who dared to raise her voice against any unfairness or harassment will not only lose her job but will potentially lose out on future opportunities. She shared the recent happenings that proved the same.

All the four panelists spoke about how in literary circles there is a difference in the treatment of literary work of men and women. The discrimination was first gender based, then caste, creed, etc. The poem, story, article of a man is viewed from an “intellectual” and “academic” angle. It is discussed, criticised, applauded for the style of writing, usage of words, matter, expression of ideas whereas when it is the work of women writers the perspective often changes. Here the discussion centers around “What caused her to write this?” “ Is she expressing her inner desires?”“ If she can be so explicit in her writing then what kind of a woman would she be?”. The discussion is thus around the creator of the work, the cause of the creation , the reason for the creation and other trivial background details instead of focusing on the work or creation.

Parameswari also shared a bad experience she had in the virtual world. At the end of a long tiring day she was inspired to write a poem “Marukkapatta mutham” (English Translation: Refused Kiss) which she also posted in Facebook. Five minutes after she finished her post she got a response asking her unsavory questions in a private message. Her enthusiasm and inspiration could easily be dampened by these type of unwanted and intrusive personal queries. Her response was to block the questioner.

While speaking about women in media, Kavitha brought a few pertinent facts to light.

Issues relating to the Tehelka journalist, Sun TV and India TV anchors were discussed. The fall out of of speaking openly about these problems in media is boycott of the individual who dared to raise her voice. Writer Jeyamohan’s comments belittling the women writers was also discussed. The audience had several questions on managing various problems and avoiding frustration. All the four panelists delivered a common answer to it: ignore /block the negative and demoralising responses and keep moving forward .

An interesting tidbit we heard was that the unwritten dress code for women in state assembly was “only saree”. While speaking about the symbolic representation of marital status of women by means of “thali” (mangalsutra), Salma told a hilarious story which occurred more than 30 years ago. It was the period of arrival of Television in the villages. All of a sudden a poor old neighbour bought a television and when people were curious about the source of funds she declared that she sold her thali. When questioned if it would not offend the sensibilities of her husband she instantly retorted “enna thangathila than thonguvangala, kayathula thonga mattangala (will he be identified only by gold and not by a yellow string).

A member of the audience recollected the story of the Tamil poet Avvaiyar. She did not want to get married and was interested in writing poems and traveling around the country. She prayed to god who promptly converted her to an old woman. He wondered why she had to become an old woman to avoid marriage and pursue her interests. To this Brindha simply retorted: “Aan Solliya Kathai” (English translation: The tale told by a man). Several such crisp retorts by her moved a CFT member to exclaim: ‘Brevity, thy name is Brindha!”

Salma’s progressive views, Brindha’s quips, Kavitha’s social commentary and Parameswari’s hopeful dreams gave us a lot of food for thought. It offered an insight into how much these women have struggled to come this far and with what grit they are continuing their extraordinary endeavours. The conclusion of the discussion was that we need to keep talking and fighting for our rights and also address the younger generation to sensitize them about gender bias and impact of patriarchy. 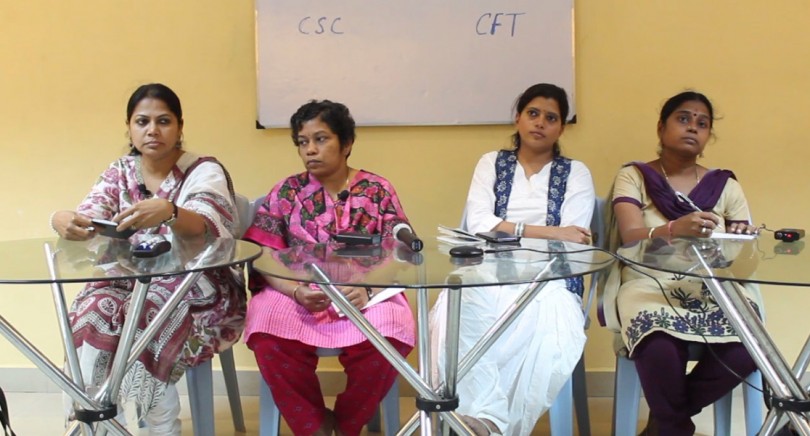 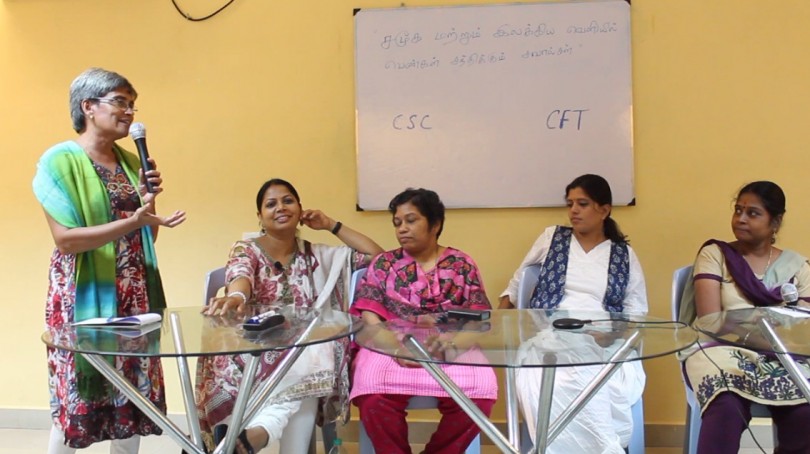 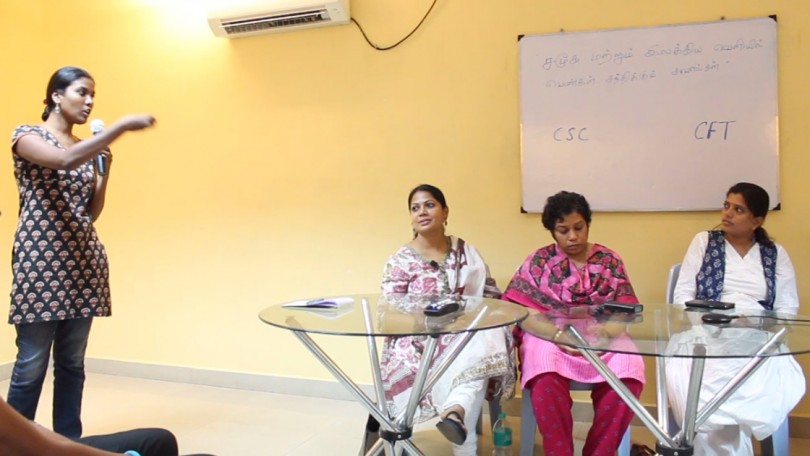