Once more he stept into the street,
And to his lips again
Laid his long pipe of smooth straight cane;
And ere he blew three notes (such sweet
Soft notes as yet musician’s cunning
Never gave the enraptured air)
There was a rustling that seemed like a bustling
Of merry crowds justling at pitching and hustling,
Small feet were pattering, wooden shoes clattering,
Little hands clapping and little tongues chattering,
And, like fowls in a farm-yard when barley is scattering,
Out came the children running.
All the little boys and girls,
With rosy cheeks and flaxen curls,
And sparkling eyes and teeth like pearls,
Tripping and skipping, ran merrily after
The wonderful music with shouting and laughter.
Mayor was dumb, and the Council stood
As if they were changed into blocks of wood,
Unable to move a step, or cry
To the children merrily skipping by,

Thus goes the tale of The Pied Piper of Hamelin where a cunning piper is said to have ‘whisked’ away countless children from their city. The Indian right wingers will have us believe that this is exactly what is happening in our society, and they call it ‘Love Jihad’. That a planned and co-ordinated effort, a shadowy conspiracy by Indian Muslims to ‘lure’ away innocent, vulnerable Hindu women and subsequently forcibly convert them out of their religion is underway. And that it is up to morally rich organizations such as VHP, Sangh Parivar, the RSS and other related groups to save the day! 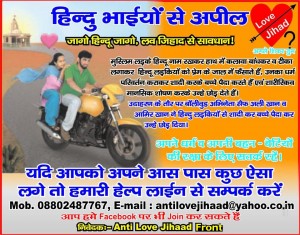 The people representing such groups accuse with much anger that these Muslims are engaging in such ‘woo’ing behaviour to slowly and steadily decrease the population share of Hindus (& Christians) and increase the population of Muslims using the women from the other communities. The rumour mills rant that these Muslim youth are funded with money to buy motorbikes, mobiles etc. to lure non-muslim girls. Obviously women fall for men who own motorbikes and mobiles!

This controversy that has grabbed Uttar Pradesh by its neck actually had its origins from a surprising state, Kerala. The current confusion in Uttar Pradesh is merely a repainted version of the smelly remains of a propaganda campaign in Kerala, and later in Karnataka. In Kerala, the chief minister of the state Oommen Chandy conceded in the state assembly in 2012 that 2667 women were converted into Islam in the state since 2006. The government later said there was no sign of an organised effort for forced conversions or “love jihad”. The propaganda later gained momentum with the Kerala Catholic Bishops Council too making similar accusations. Soon other right wing Christian and Hindu organizations followed suit.

When parents of two girls complained that their daughters were ‘cheated into Islam’, The Kerala High court in 2009 asked the state Government to look into the issue. The government investigated and told the court that although there were complaints of “love jihad”, there was no evidence to back such an allegation.

A similar request was sent by the Karnataka high court to the state government the same year, and the police in Karnataka too had a similar result to announce from their investigations.

Unlike Kerala though, the overwhelming lack of evidence did not deter the accusers in Karnataka. Karnataka’s Deputy Chief Minister KS Eshwarappa used the term on his campaign during the election campaign in 2013.

The controversy over Love Jihad is rather surprising as the rhetoric over the entire allegation sounds rather silly. To imagine that there is a planned conspiracy of Madrassas distributing mobile phones and bikes to Muslim youth to woo Hindu women is not just ridiculous, but an highly impractical and inefficient way to go about the imaginary oppression of Hindus. Yet this theory is spread by numerous RSS/VHP/Sangh Parivar based organizations. One of them, Dharma Jagran Manch, even went to the extent of running a campaign of tying Rakhis and pleading to Hindu Girls to ensure that they do not fall into the ‘traps’ of Muslim youth.

The campaign though baseless, and clearly pushed for political and communal agendas, can only result in the creation or propagation of numerous problems. It starts with the clear and definitive widening of the distance between the two religious groups. And the right wing groups merely keep adding fuel to the fire. For example, according to DNA, the local BJP group tried to spin a love jihad story into a relationship in Faizabad and violence immediately broke out. The total list of violent altercations over such imaginary issues is well into double digits.

The well-known Muzaffarnagar riots are supposed to have started with a cross-religious incident of sexual harassment. The number of people who died or where left injured and homeless is far too appalling. And now, this rhetoric has the capability to create a statewide Muzaffarnagar like incident.

This mass paranoia can result in large scale vigilantism where people can actively intervene in any interreligious marriage. When these extremist groups keep asserting that they are not against real relationships but only Love Jihad incidents, who will segregate the two? And on what basis? And they keep insisting that only conversions are targeted. The Special Marriage Act, 1954 stipulates a condition that the names of the couples who expect to get married under the act must be displayed in their official notice boards for a month to ask for objections. But when this objection is never sought in respect of marriages between people belonging to the same religion, there is a clear incentive to convert to a common religion. Because the display of names for a month can mean that vigilantes have sufficient time to look up names and personally harass the couples to be.

A far larger implication of Love Jihad is a direct and appalling subversion of women’s autonomy and freedom. It challenges the notion that women are capable of reason and decision. It leaves to sword wielding saffron terrorists, the right that women should have over their personal lives. There is certainly never an allegation that Muslim women are luring Hindu men. This is because women are always assumed to be the target of ‘luring’ and assumed to be incapable of rational decision. This is simply yet another tool that would result in larger and stricter restriction on women’s rights. In a society which assumes that arranged marriages are normal and marriage out of love is an appalling level of transgression of women on their rights, the idea that women can choose people from other religions is simply too much for them to bear.

And the attack on other religions seems rather intriguing coming from the RSS, whose chief Mohan Bhagwat in a speech vehemently argued this:

Yet, the same person, a few days later says that “Girls of the coming generation should be told the meaning of ‘Love Jihad’ and the ways to save themselves from their traps”. If all Indians are Hindus, then how can Muslims (who are also Hindus according to Dr. Mohan Bhagwat) engage in Love Jihad? Even if they do convert, wouldn’t they still count as Hindu according to him?

And the September edition of Panchajanya, the mouthpiece of RSS asserts similar accusations of Love Jihad and even goes to the extent of calling Muslims as non-humans and chimpanzee like.

So what would these extremist groups suggest as a solution to this imaginary menace? Apart from their vigilantism, would they push for legislation prohibiting inter-religious marriages? Legally, the constitution would certainly not allow any legislation that seeks to stop inter religious marriages. Yet such attempts gives us a stark reminder of the last time the same was attempted in recent history. Anti-miscegenation laws have been enforced worldwide in different countries on different basis for the better part of the last millennia. The last of this series of laws to be enacted on a large scale based on religious groups were the enactment of Nuremberg Laws enacted by Nazi Germany. The anti-jewish laws that were enacted by the Nazi government that ultimately ended with the holocaust started with “The Law for the Protection of German Blood and German Honour”. Its very first section starts with the lines “Marriages between Jews and citizens of German or kindred blood are forbidden. Marriages concluded in defiance of this law are void, even if, for the purpose of evading this law, they were concluded abroad.” They were attempting to establish German purity. Other Middle Eastern and fundamentally regressive countries have such minor restrictions on marriages too till date. It is my hope that India too will not run for Hindu racial purity.