Patients come in and patients walk out,
I see fear in their eyes as they see me tic.
Interns gaze at me in awe,
The new nurse has a frown plastered on her face! 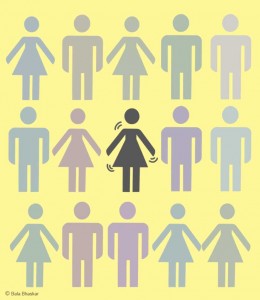 I tic and tic and twitch and tap.
Two taps on the surgeon’s table,
Pick up the scalpel and adjust my goggles.
Patient has a benign tumor, but oh no! Its on her femur!
Somewhere there lies the femoral nerve,
(Injuring which would in-dispose that woman!)
I am surely going to sever that,
If I continue to twitch and tic!

Twitch and tic and tic and twitch,
My brain stops itself at the feel of the scalpel.
Take two short breaths and one deep,
One swift incision and the tumor’s off!
Dear Femoral nerve, aren’t you safe?
Oh yes! you are, better now than ever before.

I dress the wound and put in the stitches,
And get lauded as the gifted surgeon.
But as I leave the scalpel in the bowl of antiseptic,
My brain again starts to make me tic!
I stammer my way through my P’s and B’s,
As my tongue refuses to move with my will.

My smooth muscles seem to have a life of its own,
As my brain keeps sending non-sense signals into them.
They contract and relax without intention,
I try to live life without a pretension!
I may be a little  Touretty, twitchy and ticcy,
But not all tics in the world can stop me
From being a surgeon or a teacher or a human being.

The days between the 15th of May and the 15th of June, marks the Tourette Syndrome Awareness Month.  Tourette’s Syndrome, also known as Gilles de la Tourette syndrome (TS or GTS), is a neurological condition that is characterised by uncontrolled multiple physical and vocal tics, that is repeated involuntary motions and unintentional use of phonic sounds, nonsensical words etc. repeatedly. Those who suffer from Tourette’s usually appear hyper active and in social settings, these people are usually labelled as being insane and incapable of being human. They usually end up being considered as unfit for professions and even get institutionalised for a condition that does not act as a hindrance to their intellectual or artistic abilities. It is estimated that 3 out of every 1000 children in the world has the condition, and around 5 out of every 10000 children in India.

Although, this sounds like a very rare and bizarre condition, sadly it is not so. Even sadder is the fact that the exact cause for ‘tourettism’ is not yet identified, although several genetic, environmental and neurological factors are cited as possible causes. All that can be done is to provide care for those who have severe symptoms (the constant tics could render the person dependent on others for care), and also inclusion into society for those who have only a mild version. Most of the time, the tics abate at times when they perform tasks that they find to be most gratifying or interesting.

One of the most poignant account of Tourette’s syndrome, that I had ever read, is given in the beautiful case history named ‘A Surgeon’s Life’ by the famed neurologist Oliver Sacks, in his book, ‘An Anthropologist from Mars’. It is a testimony to the fact that despite appearing as disabled, these people are more than capable of living a full life.

Being bullied when one’s cognitive and physical functions are bad enough, but in my opinion, its even worse to be labelled insane just because of the constant tourettism. I was lucky to undergo a month long training at NIMHANS, Bangalore, and there, I had the opportunity to meet people; patients with supposedly bizarre neurological conditions, and their carers. Meeting them, most of them young children, and witnessing the hardships that they go through and the social stigma that they face, made me realise that we have a lot to learn; that if we are to completely transform ourselves into a compassionate society, we should take some effort to try and accept those who are unlike us, yet not beneath us. We celebrate thought and its freedom, yet remain trapped inside our cloistered minds as long as we avoid the mother with the autistic child at the community center. Unknowingly, unconsciously, we pull away the hands of our child as she tries to play with the little boy with the strange expression on his face. Instead, why don’t we accept everyone for who they are and help them along and shatter the barriers put up by labels of ‘disability’. Who knows, there are great minds waiting to be encouraged yet slapped down into the ground, just because of their Tourettism, or of the fact that they are dyslexic or autistic? If not a cure, then at least there should be care in this world.

Rukshana is a Genetic Engineering student currently doing her project at the Department of Neuroscience, Uppsala Universitet, Sweden. She is an ardent fan of Science, a perpetual dreamer who dreams of a time when notions of discrimination and labeling break down and everyone would be able to go about their own business in this world without any fear.