Thinkfest is the annual programme organized by Chennai Freethinkers, a regional group of Nirmukta, during which science popularizers, humanists and freethought activists are invited to share their ideas with the general public. Thinkfest 2014 took place on 23rd February 2014. Soorya Sriram introduced Nirmukta to the gathering which was followed by a montage short film that narrated the inception and fostering of Nirmukta as a community to promote Science, Freethought and Secular Humanism. Cibi then breezed and asked the crowd to smile as he allegedly felt glossophobic. He went on to introduce Dr. T V Venkateswaran who is a Scientist with Vigyan Prasar, Department of Science and Technology, New Delhi.

Astrology and Astronomy in India – a historical perspective

Dr. TVV’s topic for the day was ‘Astrology and Astronomy in India- a historical perspective.’ He regaled the audience by narrating how he as a pious child was set on the path of becoming a heretic but thankfully, “All of a sudden something went wrong with the plan of god that he made me a scientist who studies astronomy!” This wit was not lost on the audience who themselves had experience of transcending the culturally bound thoughts.

Before long he began to talk about the various aspects of Astronomy and Astrology. It was rather an interactive session than just a plain monotonous talk. He primarily talked about units of measurements subsequently introducing a calendar as a time- measurement tool with hours, days, weeks, months, years and decades being the units of measurement. He asked the audience to list the units of measurement they were aware of and as the list proceeded from seconds, minutes, hours, days, weeks, months, years et al, he asked what one meant by a day. As the most common answer he got was “24 hours,” he delved deep into the question of how one could have ended up at 24 hours in the first place without any information on planetary motion and without the time measuring instruments of today. He cited a few examples from the artifacts of excavations from Hanumasagara, Belgaum, Coromandel and Pugar about how stone age people developed the ideas of measuring time and building calendars. 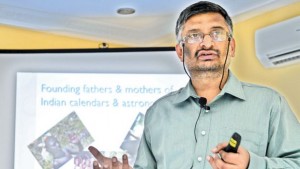 When he asked the audience to name the oldest Indian they could think of who was an expert in Astronomy, the predictable name of Aryabhatta was the response. He then patiently and skillfully went on to prove us wrong and explained how the stone age people, tribal communities shaped the measurement of time from natural events largely astronomical. He argued that the canonical ‘picture’ of ancient Indians evokes Sanskrit speaking ‘vedic’ people, but really it was ‘stone age’ civilization, people whom we disparagingly refer as ‘forest dwellers’ or ‘cave men.’ They keenly observed the natural changes and understood the seasons and knew about the tides. The great astronomers of ancient India were not some elite Sanskrit knowing individuals but common people who had the curiosity to look up, observe, wonder and think to arrive at solutions to live their everyday lives. This derivation of astronomical knowledge helped the people to improve their agriculture and fishing skills. The emergence of astronomy was thus rooted in their livelihood questions rather than only on the sacred and the profane.

Here’s a summary of the points that were covered:

Listening to Dr.TVV was a lot like reading Kalki’s Ponniyin Selvan. Growing up one hears often the magnificent stories of kings (and rarely, queens) and the grandeur of the royal stories is what stays in mind when one thinks of ancient southern India. But when you read Ponniyin Selvan you are captivated by the lives of ordinary people who perform extraordinary acts and you long to be one among them rather than dream to be a king. That was the feeling of awe Dr.TVV succeeded in conveying when he spoke about how the ancient Indians, the ‘tribes and masses’ had practised Astronomy as against what is ordinarily projected today.

Note: Video of this session will be uploaded to Nirmukta Youtube Channel soon.

Reason, Prejudice and the case for LGBT rights

The second session of Thinkfest was a Panel discussion on the topic of ‘Reason, Prejudice and the case for LGBT rights.’ The panel discussion was made possible thanks to Vikram Sundarraman who describes himself as: “Someone who has questioned both gender and religion for a long time and is now passionately involved in promoting LGBT rights and freethinking.” The speakers were members and friends of Orinam, an organization working for the cause of LGBT rights. 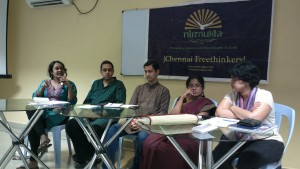 Video of the session:

Here is a personal account of the panel discussion by Orinam member Manojkiran.

“What’s not to like about a five course meal on a Sunday afternoon? That too, one with a well-crafted menu for hungry minds? With the five courses being five different perspectives on the theme ‘Reason, Prejudice and Case for LGBT Rights’, nothing could stir my appetite for information more. This sentiment was evident among every other soul in that place too.

I entered the hall just when Vikram Sundarraman was introducing the panel and the discussion began. Dr.Kalpana Karunakaran led the talk with her insights on how it all began with man’s need to brand and establish his ownership not only over property but also on his kin and how it acted as a root cause for the advent of casteism and the numerous rotten rules imposed based on gender. This brief on patriarchy was an eye- opener, because it had never occurred to me that the reasons for some of the issues we face now are buried deeply in our society’s past. With that came the realization that it was not going to be easy for one to usher in a positive change. Difficult but not impossible.

Then it was the turn of our very own Dr. Ramki, who effortlessly transported us from the ancient India to a modern and hi-fi genetics lab where he discussed the commonly used arguments against homosexuality. Yes, you guessed it right, the “unnatural” word. He not only brought up a lot of examples to demonstrate how natural and widely prevalent homosexuality is among non-human vertebrate species. He also summarized the various arguments used in the past and present to disparage homosexuality. Some of these arguments are based on religious proscriptions, and others on limited or false understanding of the science. He conclude by pointing out that arguments rooted in biology/genetics are neither necessary nor sufficient to make the case for equal rights for all, regardless of sexuality or gender identity.

There was Mr.Ravi with arguments that could silence anyone who opposes LGBT equality in the name of religion. He cited various archaic religious texts which are not only clearly out dated and ludicrous in the present day context but also how they contain contradicting statements in themselves. Right from Manusmriti, the Vedas to the Christian scriptures, this man hardly left any stone unturned. He presented two approaches one could take to address homophobia grounded in religion: a confrontational attitude pointing out the ridiculousness of other religious strictures, or a conciliatory approach that draws on scriptural statements about love, compassion and respect for humanity.

Following him was Ms. Poongkhulali, who presented the most realistic picture of the legal battle surrounding Section 377 of the IPC. She compared the judgments of the Delhi High Court and the Supreme Court on the subject matter in 2009 and 2013, respectively, summarized the review petitions and potential legal steps ahead. She candidly pointed out the flaws in the legal reasoning, the callous way in which the Supreme Court overlooked the genuine reasons behind the review petitions and ignored the pleas of the LGBT supporters. It appeared, she said, that the Supreme Court had made up its mind to uphold 377, and later made up flimsy reasons to back up its decision.

Then Ms. Shambhavi shifted the focus of the discusion from battling with the legal system to battles we fight within our families. Everytime I try to answer my friends’ questions about how am I going deal with my family when I have to come out to them, I am simply branded selfish and inconsiderate of others’ feelings. The way Shambhavi sensitively dealt with that topic put forward her justifications was very mature. She also spoke about alternative systems in place of patriarchal families. 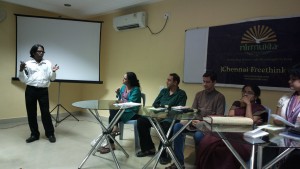 The five course meal was not all: there were many amuse-bouche too. By this I refer to the insightful questions by the audience. Several questions were raised on hetero-normative roles, sex education, LGBT in politics, the possible implications of decriminalizing consensual sexual acts. Each question brought in a different perspective on the topic. And the occasional funny comment to ease the mood was like a sip of a lemon chiller.

This event was the first time I had come across a large group of people who were not necessarily members of the LGBT community, but were refreshingly open to the views, justifications and opinions of the community. Usually when this topic is raised among my friends and colleagues, I tend to use personal arguments to make my case for equality. Following this panel discussion, I now have tons of arguments – be they science or religion, social or legal.

I am determined to not stay silent ever again in a place where I feel the need to voice out for the cause. The next time I do so it would be not only for me but for my entire community. I strongly believe if these numbers of supporters can be amplified, then the courts have no alternative but to listen to our plea. Thanks to Chennai Freethinkers, its amicable volunteers, their wonderful hospitality and for jointly organizing this event with the Orinam group.

And about the Orinam group, this was the first time I had closely interacted with a group of LGBT activists and am glad it was with Orinam that I started. Every member was a delight to talk to, and the spirit and knowledge each member brought to the group was remarkable. The informative interactions, not to forget the sense of humour, are truly the hallmark of the group, and I am looking forward to be a part of many more events. Bon appetit!”

Sai Sanjay delivered the Vote of thanks. Thinkfest 2014 thus came to a close but an assorted group of noisy people stayed back to discuss, argue and network. Chennai Freethinkers had succeeded yet again in bringing together a motley of people to make them think, arm them with knowledge and boost them with confidence that there is a thriving community of secular humanists in Chennai to reach out to. It was a heartening moment for the organizers when Prof.Dayanandan, speaker in Thinkfest 2011, having stayed throughout the day remarked while leaving: “I learnt a lot today. Thank you!”

Manojkiran is a recently minted Mechanical Engineer who works in the field of renewable energy. He is passionate about children’s education and LGBT rights. He joined the Orinam collective in February 2014.