Here are the results of the Nirmukta survey How Much Do YOU Pay Your Domestic Worker?. We received 484 responses to the survey. 3 responses which had some suspect/confusing data were not considered. Thank you to all who participated! Before we get to the results, please note that this survey was not designed or analysed by social scientists, so the findings should strictly be considered to be of the “suggests” variety, rather than definitive. At the end of this post you will find a link to a proper study.

For those who want to see the data, here are the download links:

These were the break-ups by Live-in/not live-in, Sex, Age and Location:

The following is the break-up by Task Performed. It’s no surprise that House Cleaning and Cooking were high, but it did come as a surprise to see Washing Clothes as the second-highest: 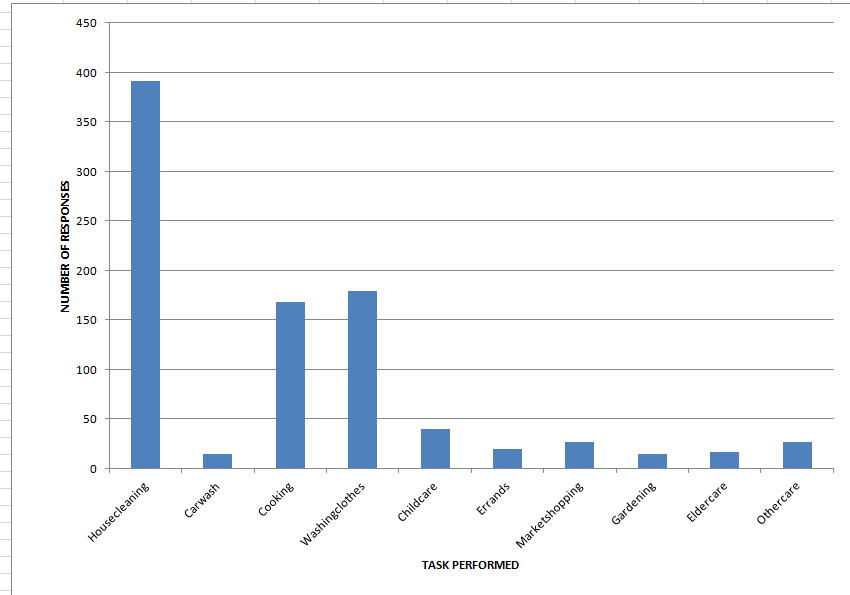 One problem with comparing responses is the variation in the employment arrangements with respect to days-per-week and hours-per-day. A domestic worker who comes in 3 times a week for half an hour and a domestic worker who comes in every day for 2 hours both get a monthly salary, but comparing their absolute salaries would be a mistake – the data needs to be “normalised” somehow to make a comparison. At the same time, normalisation would introduce errors and we would still like to take some measures of absolute salaries as well. So we took two approaches to analysing the salary:

1) “Normalise” the data by computing salary per hour, to enable comparisons of responses which  have different daily and hourly arrangements;

2) Segment the data into the most-occurring patterns, and compute average monthly salary within these subsets.

To estimate the salary per hour, we limited the data to (Metro locations + non-live-in), since the number of these responses was significantly higher than the others (320+), and their values are likely to affect salaries. We then calculated the upper and lower bounds based on the (a) days per month, (b) hours per day (range) and (c) monthly salary, and then took the mean of those two values. The excel spreadsheet linked above shows these calculations (look for the coloured columns). Here is a chart of all the salary per hour values: 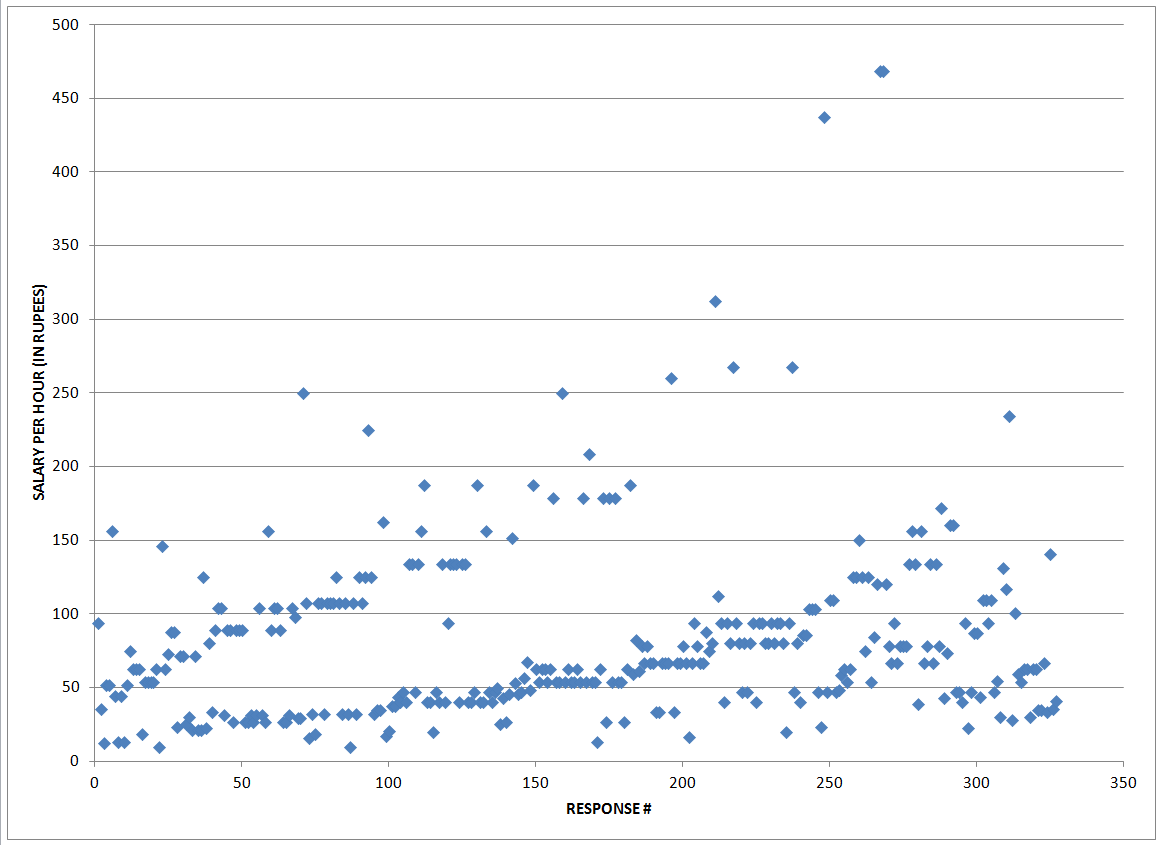 As the graph shows, a bulk of the values are below 100 rupees per hour. Here are the actual numbers for salary per hour (in rupees):

Here is the frequency distribution of the same, again showing that the most common salary per hour is in the range of 50-70 rupees per hour: 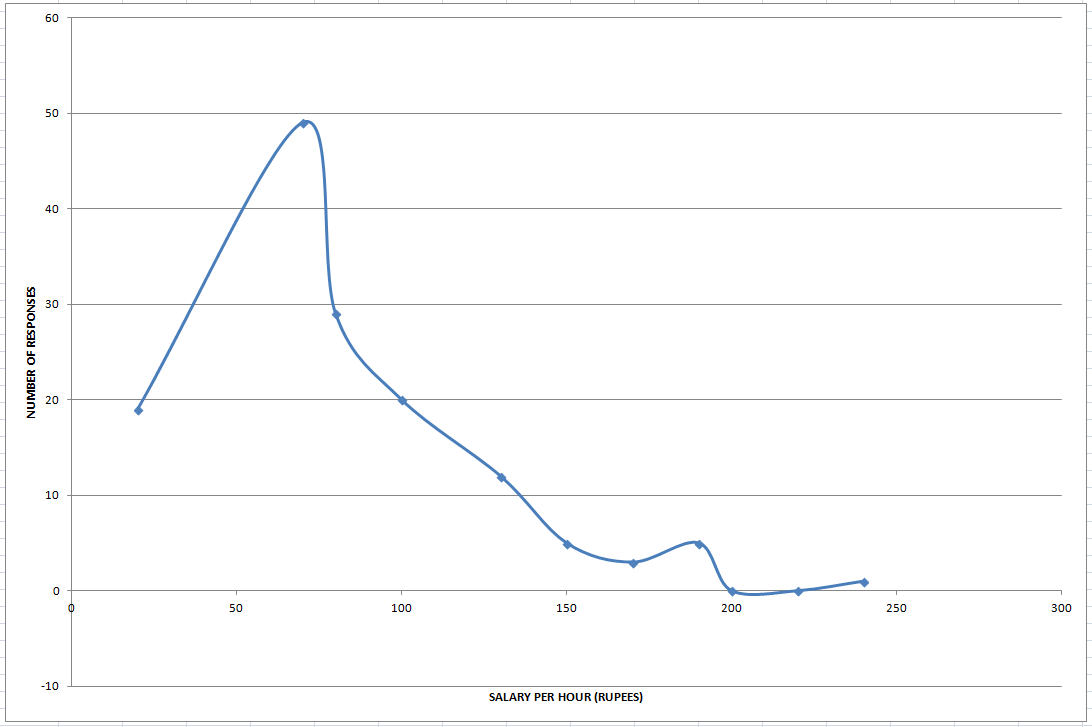 In the second approach, we considered two data subsets and found their average salaries:

a) Metro, live-in, 6-7 days per week, 4-8/More than 8 hours per day (this was the most common category of response for metro live-in arrangements – 41 responses) 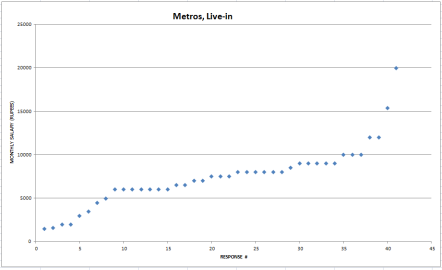 b) Metro, non-live-in, 6-7 days per week, up to 2 hours per day (this was the most common category of response for metro non-live-in arrangements – 219 responses) 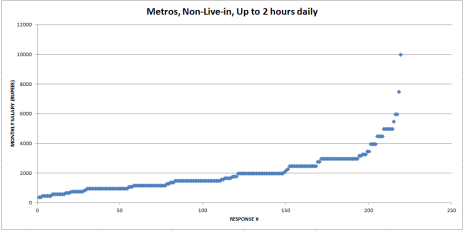 We also used this subset to measure the Annual Bonus and Annual Leave:

This was a surprising finding – as the monthly workload increases, the hourly pay decreases. In retrospect perhaps it’s not surprising at all and is an indicator of the low value we place on domestic work – that there is a “ceiling” beyond which we will not pay, no matter how much extra work the worker does. The PDF link above has the details of this analysis, below is one of the relevant graphs which show this relationship:

Thank you once again if you took the survey. For more reading on this issue, here is a good resource – a study conducted by the organisation Jagori of 691 domestic workers in Delhi. The study analysed several factors including wages; it’s  exhaustive and worth reading. These were their findings on wages: