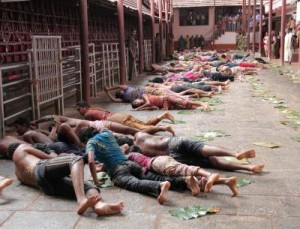 Devotees rolling on food remains left behind by priests.

The controversial “Made Snana” at Kukke Subrahmanya Mutt, Karnataka, begins amidst protests from different groups. Made Snana is a demeaning and degrading ritual practiced and followed in this mutt where devotees (generally of the lower caste) roll over the leftovers of food partaken by the brahmins on the dining leaves. It is surprising how the Mutt authorities are allowing such a practice steeped in ignorance. The protest actually has to be seen as a conflict between reason and unreason. Once the Karnataka anti-superstition bill gets passed, such practices will definitely not be allowed by the law. Therefore, the religious groups in the name of tradition are opposing tooth and nail the passing of such a bill. Why do religious groups oppose such a bill in the name of tradition? Tradition as an idea is easily invoked as a shield whenever there is any move to get rid of an age old practice like “Made snana” that disregards the rational sensibilities of human beings. Such a practice is definitely a superstition. And the proposal to ban such practices is immediately met with opposition from religious groups in the name of tradition. It is important to understand the larger issue of a much fundamental nature which has a bearing on the motives of those who oppose the bill. At a more philosophical level the nature of such an opposition actually lends support to the underlying view that religious tradition is in some strong sense nothing but superstition. In this context it would be relevant to examine such a view.

Before going further let us first try to understand these two terms: superstition and religious tradition. The concept note on the Karnataka anti-superstition bill draws upon various sources to define superstition as a belief or an act that arises out of ignorance. These beliefs are held without evidence or evidence to the contrary. Superstitions, further, disregard the cause and effect relationship. Now, as far as religious tradition is concerned, it has come to acquire a privileged status and one that cannot be questioned. Though the term is easily invoked to convey that some practice is sacrosanct, the religious authorities find very difficult to specify what it constitutes. It is actually a set of beliefs, practices and conventions that are passed from one generation of a group of believers to another. Generally these beliefs and practices are invariably associated with the supernatural. Apart from this being the central feature of religion it has also acquired a sense of people coming together. A religious community evolves from a group of believers and establishes itself by building on such a tradition around this idea of supernatural. The tradition gets strengthened over time depending upon how carefully those beliefs and practices are bequeathed from an antiquated past. Every religion attempts to exert tremendous influence by expatiating profoundly upon doctrines about the nature of the world and the human kind. But in practical reality religion is a strong community integration enterprise built around the supernatural.

The beliefs and practices associated with the supernatural are shaped in various forms like mythologies and tales narrating the powers of gods and holy men, sacrifices and rituals to be performed for warding off evil, astrology and things of that kind. The “Made snana” practice is also similar to these forms that the Kukke Subramanya authorities will hold as part of tradition. All these kinds of beliefs, woven around the supernatural, together constitute the core of religion. But invoking the supernatural is something that arises only out of ignorance and, therefore, religious beliefs, in a strong sense, can be equated with superstition. In other words, take the supernatural away from religion there is nothing that remains of religion and, for this reason, religion as such can be said to be essentially superstitious.

Those who have a pro-religion attitude can always claim that religion is not superstition, as it has been made out to be, but it does have an independent domain of discourse. This brings us to the larger question: what then is an exclusive domain of religion apart from the supernatural? Stephen Jay Gould, in the context of science religion conflict, had advocated that science and religion are two distinct domains of enquiry which he calls as magisterium or domains of teaching authority. He designates this principle as NOMA, ‘nonoverlapping magisteria”. The domain of religion, according to Gould, extends over questions of morals, meaning and value. Many progressive advocates of religion would go with Gould on this. Hindutva intellectuals even go to the extent that it is sanatana dharma (a system of eternal values revealed by the seers of the yore for the well-being of the society). That the questions of ethics, meaning and purpose are independent domains that need not have its source in religion has been sufficiently argued by philosophers. One can be moral, think of morality and theorize on justice and meaning of life, independent of one’s religious attitude. It is more than possible for an atheist to be moral and there is no dearth of examples of religious people being unethical. Any religion for that matter cannot claim that ethics and questions of meaning and purpose of life are its exclusive domain. All that remains of the carefully preserved practices and beliefs that constitute a religious tradition are unreasonable superstitions and, therefore, the two can be said to be coextensive. Seen in this light the religious groups are actually correct when they claim that the anti-superstition bill would endanger religious traditions. They are perturbed because there is nothing substantial that can be preserved as religious tradition once the bill comes into effect and hence the opposition.