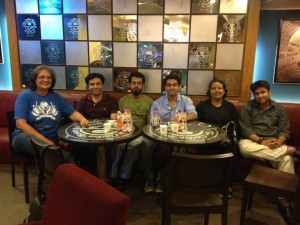 Nita, Pritesh, Ankit, Hraday, Javed and I met at the Coffee Bean & Tea Leaf, Bandra.
We introduced ourselves and started talking about what started us on the path towards atheism.
We found there was a comfort level in sharing our personal stories with each other, rather unlike it would be with other people we meet for the first time and interact with.

Pritesh said both he and his wife, as atheists and to-be parents had been pondering over whether it would be difficult to raise their child with the right values. Nita reassured him that it was easy and one needed to just equip them with critical thinking skills. I mentioned the Nirmukta Parenting facebook group where he could find resources and share helpful real life experiences with other parents. We remembered how Moral Science was taught as a subject at school and had a good laugh wondering why it was called a “science”.

While talking about Hinduism, Nita mentioned that her daughter Ayesha had discovered during her research for a paper, the little known historical facts about how the Bhagvad Gita had been extracted from the epic Mahabharat with the motive of creating a holy book for the Hindus on lines of the Bible, during the colonial era.

It is always refreshing to discuss current affairs with freethinkers. Ankit talked about how the political discourse about secularism and political parties was getting rabid. Javed then mentioned that there’s no agreement on the definition of secularism in India. Speaking of definitions, he said he’s been told that he was calling himself a freethinker because he didn’t want to admit that he was an atheist. We went on to talk about how we prefer to identify ourselves and the reasons for that. Pritesh spoke about the ISRO chief’s superstitious rituals and self anointed godmen like Asaram. I expressed my concern that people still continue to flock to other gurus believing that they’re the real thing. Nita and Pritesh wondered if people in India were turning more religious instead of less. I mentioned Meera Nanda’s book – The God Market – which said that unlike other countries, in India, modernization and globalization has not lead to decline of religion.

We talked about our plan of action for the Mumbai freethinkers’ group and decided to have regular meet ups and discussed what sort of events and activities we could plan.

Hraday surprised us by mentioning that he’d come from Surat, Gujarat State, to Mumbai for the freethinkers’ meet. He was very eager to meet atheists as there were no such meet up groups in the region where he lived. I told him that he was most welcome to attend the MFT meets and in future he could start a local Surat freethinkers’ group.
Ankit suggested that we could organize debates in college campuses with students’ debating groups and gradually promote freethought by initially starting with subjects like the state of the economy in India.
Javed said that he wanted to share how he found inconsistencies while contextualizing the Hadiths and the Quran while reading various authenticated English translations. He expressed interest in debating with theists and debunking religion with scriptural quotes.

Pritesh came up with a good suggestion that instead of a free flowing discussion, we should decide on the agenda for the next meet and hold a structured discussion with 15 minutes for each speaker. Nita with her experience of hosting meets raised the issue of how expensive it was to hire a place for our events in a city like Mumbai.

We concluded that our in our next meet, we’ll invite Ayesha Bulani Thomas to talk about her paper on the Bhagvad Gita. MFT will screen an award winning feature film in January 2014 and invite the atheist writer/director for a talk and interactive session with members. It’s an art house film and has not had a commercial release in India, though it has been screened at freethought conventions/conferences in the USA and film festivals in Europe.