Nirmukta’s Bangalore chapter, the Bengaluru Freethinkers, participated in this year’s Bangalore Pride Walk on Sunday, 24th November. The Pride Walk was the culmination of the three week-long Karnataka Queer Habba, which included events like protests against the Hassan arrests, a transgender day of remembrance, film screenings, theatre performances, a marathon and a diversity fair. This was the sixth pride march in the city, and saw attendees not just from Karnataka but other states as well – this news report puts attendance at 1,300! Here’s another news report.

Twelve of us met up in the morning in Cubbon Park to make our posters. It was hard work, what with only three of us having any design skills to speak of, but we did a pretty good job in the end (helped by three sweet little kids who came over and volunteered to do some colouring!). Here are some of the posters as they dried in the sun: 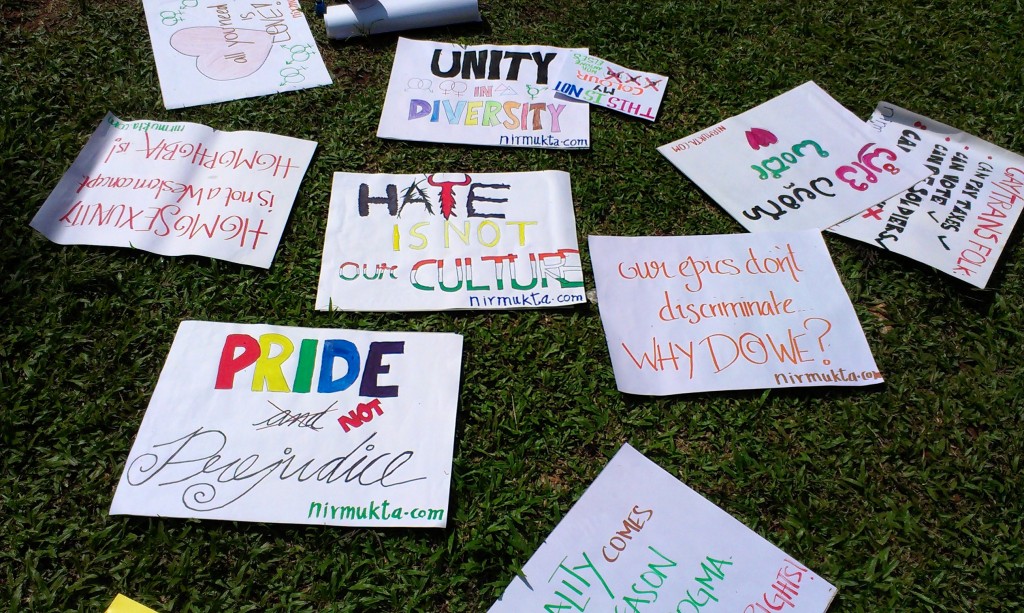 Some of the posters, lying on the grass. (See below for text.)

The text of the posters:

“Hate is not our culture.”

“Our epics do not discriminate, why do we?”

“Morality comes from reason, not dogma.”

“Homosexuality is not a western concept. Homophobia is.”

“Gay/trans folk can: pay taxes, vote, be soldiers, but not marry?” 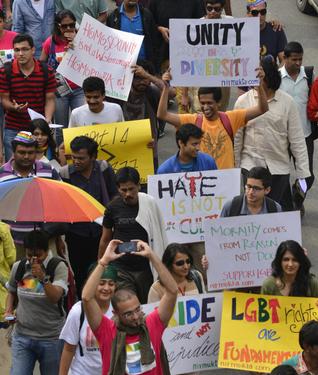 The gang joins the march with their banners. (Photo by K. Murali Kumar, The Hindu. Links to source.)

The march kicked off at 2pm from the city railway station, and proceeded through about six kilometres to the Town Hall, with helpful police officers guiding us through the traffic. It was led by was led by Dykes on Bikes, an all-woman motorcycle contingent. It was a fantastic experience; people shouted slogans and danced in the rain. Events like this are a necessary reminder of the work that needs to be done, and for us at Nirmukta to reaffirm our commitment to secular humanism.

Holding the banners aloft on the steps of the Town Hall. Photo by Merina Morris. 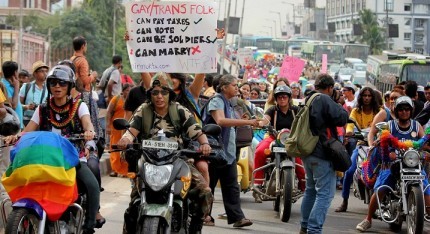 A shot taken from the front of the march, with the Dykes on Bikes leading the way and the procession following behind. Photo by Merina Morris.

You can find more photos of the march here (Facebook album).

Here are some quotes from members:

“I’d never been for a march of any kind before, and wasn’t sure what to expect. The sense of solidarity, of fighting for a good cause, was overwhelming. From Nirmukta’s point of view, most of us have zero experience in on-the-ground activism. I hope participating in events like this is a catalyst for us for further and stronger activism.”

The next day, we  heard the shocking news that Vamshi Raju, a 21-year old trans person who had been at the pride event, had committed suicide the following morning:

The victim, identified as Vamshi Raju, was a resident of Yeshwanthpur near Mathikere and a final-year engineering student. “Raju danced openly at the Pride Rally on Sunday and it was aired on TV. His family saw the visuals in the evening news, and a big fight broke out between the victim and his parents when he returned home from the rally on Sunday night. Unable to bear the rejection from his family, a depressed Raju committed suicide,” said human rights activist Manohar Elavarthi in a press release.

Such a tragic loss and a reminder of how far we have to go still.