When Ajita Kamal started Nirmukta in 2008, one of his aims was to build a community of Freethinkers. Religion with its institutions and rituals serves as a good support system which atheists in India sorely lack. We have been meeting for nearly 3 years now and the first meet is still fresh in my memory. What brought the fifteen of us together then was a search for a community where we could share, talk, exchange ideas, learn etc., This has been happening slowly and surely and it is fascinating to see this community building happen right before our eyes, so to speak. As a group, we have done a lot of activities together – apart from meeting in closed halls and listening to lectures, small groups of members have visited each other, participated in a tree walk, watched films and so on. Our interests have diversified and our knowledge horizons have broadened as a result of meeting interesting and knowledgeable people who were willing to share what they knew. For the 27th CFT meet on 20th October we had a talk on ‘Film Appreciation – A Rationalist Approach’ by Neethi Seenivasagam. Neethi has been one of the earliest members of CFT and has been attending the meets right from the first one. 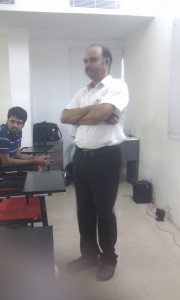 He started by saying that a well made film offers experiences that viewers would find worth while, diverting, provocative, puzzling or rapturous. He then spoke on

1) Rationally choosing the films to watch

3) Using of colour and light in films

4) The director’s treatment of stories

5) Contributions by the cinematographer and the designer

Neethi gave a brief about the type/style of films – Realism, Classicism, Formalism and helped us to appreciate films by focusing on the various aspects such as angles, lighting, colours.He also showed a few clips and made us understand how a narrative is structured, how a scene is organized and how sound is handled as dialogue, music, effect track, ambience etc., His frame by frame analysis made us realize and appreciate this art form for its beauty and intricacy. Neethi introduced us to some great films and helped us to appreciate the nuances of storytelling. He gave a brief introduction to the works of Charlie Chaplin, Ingmar Bergman, Satyajit Ray and a few others. 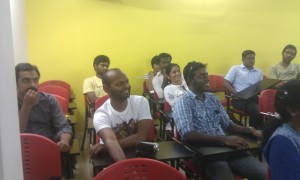 We also saw a few clips from films such as Francis Coppola’s ‘The Godfather’, Martin Scorsese’s ‘Taxi Driver’ and Kar Wai Wong’s ‘In the mood for love.’ He played the haunting music clip Yumeji’s Theme from the film ‘In the mood for love’ and the music crawled into our brains and stayed there for days. Some of us got together a week later and watched the film and to compensate for the sad feeling at the end of it, we watched a few episodes of Blackadder too. 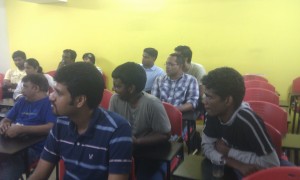 In the Indian scenario, he talked about the works of Satyajit Ray, Shyam Benegal, Adoor Gopalakrishnan, Ketan Mehta and G.Aravindan. Tamil Film director Mahendran received a special mention for his film Uthiripookkal and Neethi also spoke about the film Aval Appadithan which was much ahead of its times. He added that he was not against watching masala films for entertainment but urged us to be rational in choosing the films to watch. He warned us to be careful about the hype created as a marketing strategy and told us to identify genuine reviews. And if a film is good, he suggested that we ‘watch it, analyze it, rate it (he gave a simple formula too!) and talk about it.’ His final advice was that if there was nothing worthwhile in the current crop of films ‘buy a classic dvd and watch it with remote’ and that way you could pause, savour and go back to relish and understand the nuances of the film. The talk came to an end with a screening of his short film on the subject of superstition. That film invoked mirth and gave us enough scope to rant about superstition and irrationalism as without such a rant a CFT meet is never complete. 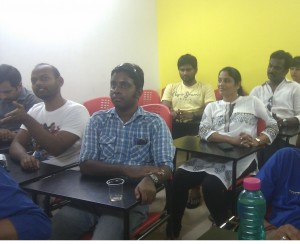 Actually we could not interact as much as we wanted to because we were short of time. Time just flew and before we realized Neethi had spoken for nearly 3 hours and it appeared like he had substance enough to speak for atleast 3 more hours! Once in a while we interjected as we could not resist taking the occasional jab at religion and joked about the ‘god films’ in Tamil. Our humanistic tendencies too came to the fore when we worried about the state of affairs in our country and spoke about being aware and sensitive while appreciating films. Neethi’s list of good films and the reason why he considered those as good got us curious and at the end of the day each one of us carried in our minds a list of ‘to be watched films.’ Atleast one member has already watched ‘Wild Strawberries’ and another member ‘Taxi Driver’ thanks to the talk!

This meet was different in many ways. We sought to explore something other than what we generally do which is talk incessantly about atheism, freethought, superstition, science etc., The subject of this meet was totally refreshing and invigorating. A community, in contrast to a cult, is built when its members are able to savour a variety of experiences not necessarily always the same ones that originally brought them together. Our members have done exactly that – recently a few took a trip to Sriharikota to witness the launch of the Mars Orbiter Mission and  sometime back, a few visited a Blue Cross shelter to spend time with cats and dogs.  In that sense the community building of Chennai Freethinkers is complete and what we need to work on is to sustain it and keep it growing by bringing in new people who might be yearning for such a community of freethinkers.