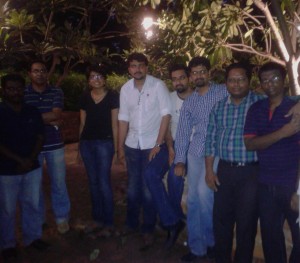 The 26th Chennai Freethinkers meet took place on 29th September 2013 in a park – Semmozhi Poonga.  Ten participants attended the meet including first timers Rukshana and her brother Naseef Mahamood.  Naseef is an architect and Rukshana is studying Genetics.  Being raised in a pretty much secular family, they gave up their faith quite soon.  Naseef recounted how some of his friends and relatives, upon realizing he is non-religious would try to talk to him and get him on the “right path”.
After introducing ourselves, we talked at length about gender issues ranging from arranged marriages to women’s education.  Soorya noted how people correlate divorce rates with increase in non-arranged-marriages and draw the conclusion that arranged marriages are therefore better.  Such a conclusion does not necessarily follow as we cannot infer that all non-divorced couples are having a successful marriage.
Blaise pointed out that in most of the social settings women are rarely allowed to set the agenda or initiate conversations.  We came to a stark realization that even at this meet, the women participants could not get their point of view across easily. Men had to be aware not to unwittingly interrupt when women participants were expressing their views.
Rukshana noted that childhood development plays an important part in solidifying gender roles.  Many noted how leading children’s toy shops have segregated sections for boys’ toys and girls’ toys, with color coding of blue and pink respectively.

The discussion later turned to casteism in various fields.  When Rukshana applied for internships, she noted, organizations were biased towards upper caste pupils when awarding projects.  Sanjay discussed casteism involved in film and entertainment industry. Sanjay and Naseef spoke at length about how culture and religion are intertwined in India resulting in different religions following different religious practices that were not natively part of their religion.  There are Churches where “angapratharchanam” (prostrating and rolling around the church premises) which is typically a Hindu ritual, is practiced. Many of the Sufi practices have local roots.  Even within Hinduism, several intermediary stories have been invented in order to bring the local deities within the Hindu pantheon of gods.  They subsequently discussed about introduction of Horses into the Indian subcontinent and cultural mixing in India.

Dating and commitment, the atheist way

Say No to Arranged Marriage