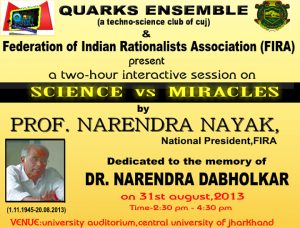 Well, it was not my first visit to Ranchi and by the looks of it, it is not going to be last one either! When I was invited by Venkatesh, who is one of the main moving forces behind the quaintly titled ‘Quarks Ensemble’ of the Central University of Ranchi, to have an interaction at their inaugural function ‘Ankurann’ at their campus near Ranchi, I was in two minds whether to accept their invitation or not. But, it was at the behest of D.N.S. Anand, whose wife the late Sarita was one of my prize trainees and had conducted hundreds of interactions in the remote areas of Jharkhand, that I agreed. With the collaboration of several organizations and academics, he wanted me to deliver a lecture in her memory. It was also with the objective of strengthening our movement in this backward state that I agreed. Again, since none of the organizations was in a position to reimburse my expenses, it was Jagan Veeraraghavan who kindly agreed or rather volunteered to take care of them as soon as he come to know that! 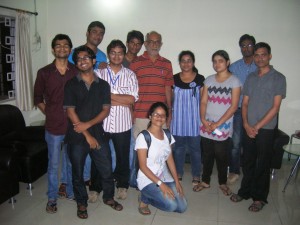 I reached Ranchi on the August 30th and was taken to their campus. The very first thing I did was meet with a few of the members of his organization late in the evening. But, when we set out for an evening walk, we saw a school next to their campus called as H.H. School. I was told that this was being run by Shadab, an engineer who had sacrificed his career to educate the underprivileged sections of the society. We thought that we could have an interaction with the students of his school in the forenoon, as the inaugural function of Ankurann was at 2.30 pm. He was so thrilled that he came running out of his house to meet me! He told me that he would be indeed glad to organize an interaction at his school, as he already knew about our work and has seen quite a few videos. Then it was evening and time for a meeting with the young students who had organized the program. We had discussions for nearly three hours about various aspects of the movement and how the youngsters should get involved with it. 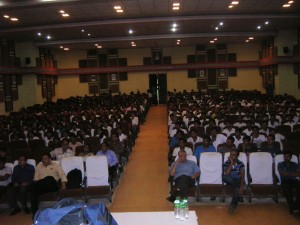 The next morning was the interaction with the students of the H.H. School, who were very intelligent and keen to know. There were a good number of questions and active involvement of the students, whenever they were asked to come up for a demonstration. We also showed videos of the so called godmen and their tricks. In the afternoon it was time for the interaction with students of the Central University; the program which was the inaugural one of the Quarks Ensemble. Though we had to start a little late due to the rain, the auditorium was packed when we started. We started with a tribute to the memory of Dr.Narendra Dabholkar who was cruelly assassinated for his work in dispelling superstitions from the minds of people and went on with the program. Again, there was active participation by the students who also applauded our efforts to develop scientific temper and remove superstitions from the minds of less informed people. Though the program went for nearly two hours, many of the students felt that the time was too less and I should have gone on longer. But, there was a sitar recital scheduled soon after and hence, we had to wind up. I was quite moved to receive a standing ovation from the audience! Some of them who met me later wanted to learn the techniques for the demystification of the so called miracles and I promised them that we would soon organize a workshop or invite them to one which would be held at their place or nearby. I was quite glad to meet this group of young enthusiastic people some of whom were ready to work full time for the cause after their graduation. 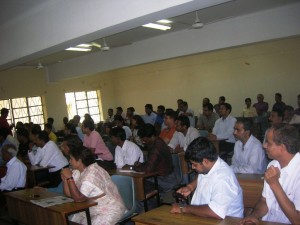 On the next day, we had the crucial meeting at the Jharkhand Science Forum and the Science for Society, Jharkhand, about going ahead with building up the movement. The meeting was organized at the Lalpur campus of the B.I.T., Ranchi. I was to speak about ‘Superstitions and Science- A Contradiction in Contemporary Society’ as the first Sarita Anand memorial lecture. Sarita was a very active member of the Science for Society, Jharkhand and had been tirelessly working for spreading rational thinking among the people of her state. She was also the zonal secretary for the East zone for FIRA. Though she had not attended any training program as a participant, she had been the organizer and had picked up the techniques by watching! When none of the trainees came up to the mark, she took the responsibility of conducting the programs herself and became active. Getting involved in this activity brought her into the movement and we can confidently say that up to her last breath she was a rationalist. The lecture was organized in her memory and as her husband, Sri D.N.S.Anand said, he would organize at least three programs in a year in her memory; one lecture, a training program and some activity for children related to science popularization. I spoke about how innovations of science were being used to propagate unscientific ideas. One of the members of the audience took umbrage at my reference to Ramakishan Yadav aka Baba Ramdev’s claims of miraculous cures and mentioned an anecdote about how an end stage renal failure patient was cured by his medication. I replied that the same ‘treatment’ could be applied to millions of patients with the same condition; many of whom were undergoing dialysis and waiting for renal transplants! I also told him that treatments would not be by anecdotal evidence, but by proper clinical trials. 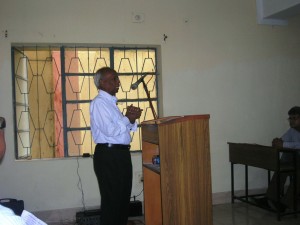 Dr. Ramesh Saran, a Professor of economics of the Ranchi University spoke about their efforts at eradication of superstitions and his experiences and how they had managed to convince tribal societies about the need for vaccines, vitamin supplementations etc. This was followed by a short intervention by Dr. Krishna Kumar Nag, the former Vice Chancellor of several universities in Jharkhand. He spoke about his becoming a rational thinker at a very young age and that influencing him to take up his career as a biologist. Dr. Shishir Kumar presided over the function. This meeting, attended by several academicians of eminence and also young people from people’s movements, trade unions, students was a very promising one, because it brought together people from various walks of life and three eminent academic institutions- the Ranchi University, BIT and the Agricultural university. Activists from nearby districts had also attended the meet-some of whom had already taken my training programs but were not very active. The meeting also paid a tribute to the memory of Dr. Narendra Dabholkar and the participants expressed their ire against the Maharashtra govt. for failing to arrest the culprits even after two weeks. A one minute silence was observed and it was resolved that all of us would work tirelessly to uphold the ideals that he stood for.

These meetings in Jharkhand hopefully will stimulate movement for eradication of superstitions from the state whose population is nearly 50% of dalits and tribals. While one cannot dismiss all of their practices as superstitions, the more harmful ones need to be tackled on a priority basis like dayin pratha, in which helpless women are branded as witches and treated horribly and sometimes killed. The common belief that all diseases are due to possession by spirits and trying to exorcise them by rituals is another. It was decided to conduct training programs for young activists so that they could go to the field and make people aware of such things by performing apparently miraculous items and then explaining them. The activities of Christian ‘healers’ who claimed that diseases could be healed by prayers during their meetings called as changai sabhas were also mentioned.

We have made a number of attempts to build up the movement in this state for the past decade. I had even undertaken a tour of the state conducting training programs in various districts in places like Jamshedpur, Bokaro, Dumka, Ranchi, Lohardaga and elsewhere too. But, not many activists have emerged except Sarita who is now no more. However, her husband D.N.S. Anand has promised to work full time towards building up the movement. With the coalition of academics, activists, students and interested organizations that we have created, it is our hope that the movement will grow and it is very much needed in a state like Jharkhand.