A majority of people growing up in India would have, like I did, experienced child abuse to some degree, ranging from being beaten for perceived transgressions to emotional abuse including being isolated, dehumanized, constantly belittled and being told one will never be good enough. Many of my own experiences only constitute anecdata, and are backed up to a limited degree by the experiences of others I know that I’ve seen firsthand, but the evidence does go beyond.There is a substantial body of statistical evidence from a reasonably large nationwide survey carried out by the  Women and Child Development Ministry in 2007, featuring more than 12,000 children, that suggests rates of emotional abuse are roughly 50%, sexual abuse 50% and physical abuse 66% [1]; a staggeringly large number. 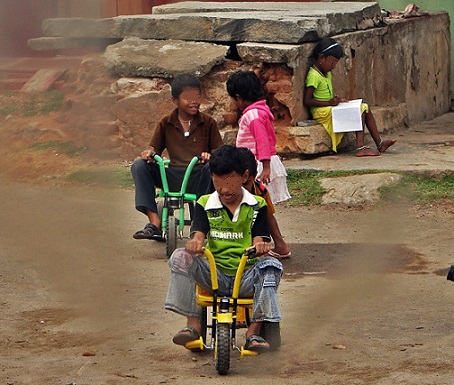 Children playing in India. A boy on a tricycle pedals in the foreground, another boy (also on a tricycle) and a girl right behind him. Behind them, a girl sits on a broken-down wall, reading a book.

The consequences of abuse

I experienced years of abuse leading me to present with Post Traumatic Stress Disorder as the most devastating consequence, but with a host of other related psychological issues that are peripheral in terms of medical terminology but nonetheless greatly impair social functioning. My abuse involved being subjected to constant judgement against unrealistic expectations, the constant belittling of what I did achieve, and being beaten quite frequently – I was beaten for getting the date of a science exhibition wrong, which only led to me making a lego space shuttle too early, for instance, and the accusation that precipitated the abuse was that I’d dared lie to them, when I’d simply got it wrong – people make mistakes and you don’t assault them for it.

I was beaten badly and pinned to the floor for loud protestations following criticism for below-par exam results in grade 8 (they were 78%, go figure). Of course, loud protestations at what might have been otherwise fair criticism was also a hallmark of battered self-esteem following years of being deprived of it. The worst instances of abuse were public; I was beaten up at Sringeri for refusing to take my vest off before getting into the temple and was threatened with being handed over to the policemen that were nearby. I was also splashed with cold water after being dragged off to the bathroom by an uncle in the presence of a gathering of relatives for an angry outburst. The worst effects of all that abuse went beyond the momentary pain of the beatings – it was internalisation of the assertion I could never be good enough, and of the tendency to hold myself to impossibly high standards to try and counter that, and then as a consequence I had to pretend to be infallible and when there was criticism, fair or not, it led me to break down, hyperventilate regularly and often be uncouth.

If that happened at home I’d be silenced with utterances like “What will the neighbours think of you?” when the precipitating triggers were the abuse I received. The fact that I went through an eight year period of bullying for urinary incontinence hardly helped matters with the precarious state of my self-esteem.  In the end I stonewalled much of it to cope, until I travelled to the UK, experienced far more affection and support from friends and strangers alike, and felt betrayed by it all, and a return to India for a brief period earlier this year triggered flashbacks of the abuse and I’ve since had to regularly grapple with not only the anxiety and depression that can accompany PTSD, but also feelings of betrayal, migraines and occasionally, nightmares.

It’s gotten to the point where it has started to threaten the integrity of my best friendship, which was one of the strongest sources of support I’ve had in countering my condition. I’ve found myself dragging myself from one therapy session to another, with lack of social contact/affection and isolation being a recurrent trigger that brings about panic attacks and flashbacks.  These effects – PTSD, depression, additionally risky behaviour, low self-esteem and suicidality are all traits that are significantly associated with non-sexual child abuse, and time and again show up across a panel of studies on the effects of abuse, which are reviewed in [2], and perhaps even more alarmingly, it is emotional abuse; insidious, imperceptible to external observers, and easily dispensable, that is associated with the most exacerbated risks of the aforementioned conditions and a range of other mental health disorders.

There are fundamental scientific and medical grounds to oppose physical and emotional child abuse, along with the irrationality of some of the permissive moral and ethical attitudes that contribute to the widespread nature of this phenomenon.

The role of irrational assumptions in perpetuating abuse

I’m afraid I will have to indulge in a bit of writing solely based on personal observations here, subject to further corroboration with the experiences of others, for hard data is difficult to come by, yet. I have seen patterns of behaviour that are culturally and behaviourally entrenched that serve to firstly condition children to a position of subordination by default, and secondly, render them vulnerable to socially accepted abuse.

Age, generally speaking, is an asset in Indian society, especially when those that lack age-privilege, as I call it, are on the receiving end; the cultural practice of greeting older people by bending down and touching their feet is a concretised expression of that privilege, which is reinforced by the constant refrain that “one should listen to what elders say”. This is very similar to societal norms that condition women to be meek and submissive in Indian society, like the assumptions that women must speak softly, that they are delicate and shouldn’t be beaten like boys should be and so on, only that the objective is to render children subservient to authority, with age as a proxy.

It is in this context that some tend to find the very act of children asserting themselves shocking and react with violence and intimidation to reassert that privilege; personally speaking my abuse followed a pattern – I used to be beaten first and would retaliate, and be beaten further until I was subdued  – the underlying principle being it is alright to physically assault people as long as they were younger but for the trend to be reversed was a grave crime against all of humanity. Of course, even when there isn’t physical violence involved threats and intimidation are regularly used – an oft heard one is threatening children with being sent off to boarding school where they’ll apparently be treated far worse than at home – vicissitudes that are used to justify appalling treatment in the first place.

This conception, I found, extended to people who were very young adults countering much older adults;  I found myself being assaulted publicly in India when I was 19 or thereabouts following a bicycle crash for daring to suggest it hadn’t been my fault – for I nearly had someone crash into me before I crashed into a watermelon cart, and the assaulter wasn’t even the cart-owner, but some passer-by who took it upon himself to intervene while yelling homophobic slurs in the middle of everything. In any civilised country he’d have been in prison, but I was cornered and threatened with being handed over to the police, and in a country where police-led torture is prevalent [3],[4] I just decided to weather the storm, to the point of bowing my head in pretend-shame when I was asked to. The underlying point I’d like to put forth is that differences in age are associated with the degree of intrusiveness socially sanctioned into personal agency.

Traditional sayings like “Dandam dashagunam” (beatings are tenfold more effective than verbal chastisement, if I have my Sanskrit correct) further serve as cultural encapsulation of those attitudes. There is also, rather sickeningly as I found out, a certain level of glee associated with putting those impudent children in place, reflected in jokes about things that ranged from schools that were stricter on their students to about how relative x taught child y a lesson for not doing z, even when z happened to be 15; not that abuse is any more acceptable when the victims are younger. This was coupled to arguments that they were free to treat me as they wanted because they were looking after me; almost like taking care of a child entitles you to treat a person like property.

The indoctrination of children is often completed with other two bastions of irrationality; subservience to religion and to teachers, who again rely on age to support claims of knowledge that don’t always agree with reality, aptly summarised by another Sanskrit string of words that establishes things that ought to be respected in Indian culture and society “Maata, Pita, Guru, Deva” (Mother, Father, Teacher and God).

Additionally, my confrontation of my abusers about it recently elicited a host of different responses, including “If you hadn’t been stubborn I wouldn’t have beaten you”, “You’re an adult now, and should get over it”,  and when I had withdrawn into a shell, a very irritable shell at that, at the height of my PTSD in India, I was told “Everyone beats and scolds their children, why is it only a problem for you?” as if I’d somehow willed it on myself despite, and not because of, the abuse I had put up with. The last assertion, particularly, betrays a lack of knowledge about lots of medical problems where some degree of stochasticity is involved – abuse might not affect everyone to the same degree, but that doesn’t mean the presumption there are no effects and it is therefore acceptable is valid.

It isn’t difficult to move on from that point to see what underlies the erroneous reasoning that allows abuse to persist on such a widespread level. Firstly, it is irrational to associate age with being right or knowledgeable per se. Secondly, the assumption that children are lesser beings, as a consequence of conflating age with wisdom and authority and the consequent denial of agency to children needs to be challenged. Ideally, discourse would extend to challenging the social practices and behaviours that drive unrealistic expectations which can, apart from indirectly contributing to abusive environments, by themselves stifle personal development; a prominent cultural example is the obsession with grades as a measure of more than recall on a test – the association of academic achievement with self-worth and/family honour is responsible for a considerable number of exam-related suicides in India [5], extending sometimes to the families of those writing exams [6].

A fuller discussion of child abuse for what it is and why it is detrimental, accompanied by the necessary legal, political and social changes that make acting on that realisation possible, is imperative. Challenging prevalent cultural memes that dictate that abusive behaviour be considered part of a loving upbringing of children (parallels to “spare he rod and spoil the child”, for instance) will be, in my opinion, an essential part of that.  The development of a support network for victims and a system to undertake preventative work with parents or other people who perpetrate the abuse of children simply because it happens to be the social norm, in combination with legal penalties for child abuse, with due emphasis on the protection of victims, are objectives I believe to be worth striving for as a rational, and humanistic, cause.

A fuller list of academic references related to trauma resulting from child abuse in adulthood may be found as citations in this paper
http://www.johnbriere.com/STM.pdf