On 7th of July I had been invited to Tiruchirapalli in Tamilnadu to take part in the solemnization of the marriage of one of our activists, Kali Muthu, with Kalpana. His parents and many members of his family were absent or rather we should say boycotted the function for the simple reason, that they were Gownders, one of the OBCs while the bride Kalpana was a Dalit. Her father was active in the leftist movement and her family had no such problems and had turned up in full strength. The ceremony was performed by Valaguru Nehru who administered the oaths to the couple and these were quite simple. It was just to say that they were marrying each other of their own free will and promising to lead a life without any religious rituals, superstitions and priests! The whole function was over in a couple of hours and would have been over even earlier but for the program on eradication of superstitions! Kali Muthu and Nehru were emphatic that I should conduct a lecture demonstration on scientific temper and I took an hour for that. This program was very much appreciated by the invitees most of whom were from villages. One has to remember here that the so called self respect marriage without any priest or a religious ceremony is recognized as a common law marriage in only Kerala and Tamilnadu. There is no such legal status accorded elsewhere and the marriage has to be registered under the Special Marriage Act. In the two states where it has legal status it can be registered a common law marriage under the Hindu marriage act.

But, despite of all the efforts of these progressive groups, the state still remains highly polarized on casteist grounds on such issues. It was only a few days before that the body of Ilavarasan a Dalit boy was found by the railway tracks near his village. His crime was that he had married a girl, Divya, against the wishes of her community – the Vanniyars. Divya’s father had committed suicide unable to bear the humiliation of his daughter having married a ‘lower caste’ boy.  That was followed by riots, burning down some villages populated by Dalits and mayhem. Subsequently Divya went back to her natal home saying she wanted a divorce and within a few days, Ilavarasan died. His body was found by the railway tracks in the village of his grandparents and a hurried autopsy was done. Now, due to protests by dalit groups, a second one has been ordered by the High Court.

That brings us back to these inter-caste, inter-religious relationships like marriage. Though we would very much like to support such, sometimes we have been subject to attacks for having done that. This is more so when one of the partners is a ‘untouchable’. Though this is a criminal offence it still persists today. It has gone to such an extent that at a village near Kundapura, a priest walked out of the marriage hall when he came to know that the couple were dalits. Those who had been employed to clean the hall refused to do that and now cases against them have been booked under the atrocities act. But, even here we can see the efforts of the police to soft pedal the issue by trying to dilute the case against the owner of the hall under the pretext that he had tried his best to make alternative arrangements. It is condemnable that such attitudes exist in this society even in the 21st century which shows that our so called progress has been only a cosmetic change. Again, when it comes to ‘conversions’ for the sake of marriage I feel a little hesitant to attend such. I would rather support one where the participants keep their own religious beliefs or give them up all together and have a secular marriage. In India such a provision has been made more than half a century back under the Special marriage act. In this the act of registration itself constitutes the marriage. While under the registration of Hindu marriages the registration is a record of such a ceremony having taken place under the customs prevailing in the caste or community to which either the bride or the bridegroom belong to as long as both of them are Hindus. If the ceremony is an invalid one the marriage too does not enjoy legal sanction. Many times we have couples belonging to different religious beliefs getting married with the rituals of one of the belief systems and then the marriage itself being held to be invalid. This is particularly applicable to tying the tali or mangalsutra in a temple with the priest and the idol as witness. But, there is a provision for converting one to Hinduism by making them undergo certain ‘purificatory’ rituals and filing an affidavit by the organization called as Arya Samaj. Recently, I was invited by a Jati Mukta Sambandha vedike from Udupi who had conducted a marriage of a Muslim girl with a Hindu boy after converting her to Hinduism by such a ceremony.

Again, I do recall an intercaste marriage that we had supported a couple of decades back. They were from a village near Kundapur. The bride was from the dalit community and the bridegroom was a Brahmin who was a pujari. They had fallen in love and this was opposed tooth and nail by his family who had managed to send him away to Trivandrum with the hope that separating them would work. But, this made their love stronger and we helped them to get married. Now, they have two daughters who are doing well, he has been totally disowned by his family and they live in a colony of dalits having their own house. With this background he could not obviously continue his profession as a pujari but is now a successful caterer. His wife’s community respects him very much and every time he meets me he tells me that he is very happy with his decision.

Sometimes the sword in the hand is more effective than a marriage certificate. May be more than two decades back, a couple from a village near Belthangady had come with two of their friends. They wanted to take a photo with me with garlands around their neck and he wanted to get married to her in my presence by tying a tali around her neck. The only problem was that the bride was a Christian and he a Hindu. They were already living together and this had raised the hackles of the ‘moral police’ of both their communities who were always harassing them. To put an end to that they wanted to prove that were married and hence wanted a photograph. We took the needed things went to a studio and had the photos taken. But, I explained to them that they had all the right to live together as a couple whether married or not and that this marriage was not legally valid at all as they belonged to different religions. When I followed up the case I came to know that after a few months some locals also decided the same and surrounded their house and wanted to attack them for living together without a legally valid marriage. I was told that he tried to convince them that they had a right to live together whether they were married or not, but a few of crowd challenged him. So, he went into his house and came out with a sword and told them that he was not married and was having a live in relationship and if anyone had any problem with it, he would take up the issue with the sword in his hand! It was the last time that any one had any problems with his ‘relationship’! So, the weapon in his hand was more vocal than any legally valid marriage!

We do keep getting such cases as young people fall in love and want to get married. The families have more ‘important’ things to bother about like religion, caste and prestige. It gives us great pleasure to see such couples happy together but also makes us sad when the marriages fall apart. But the success rate for such is higher than so called arranged marriages. 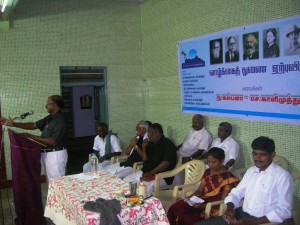 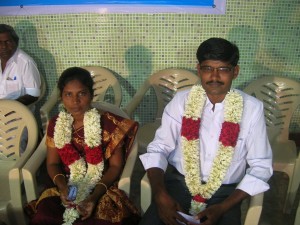