(Published originally at The Fifth Estate, the student-run media body of IIT, Madras.)

A small group gathered at the Media Resource Centre, IIT, Madras on the afternoon of 11th August to participate in a discussion on India’s serially neglected group – the Dalits – and the ignominy of manual scavenging. Seeking to deliberate on the ‘Caste and Gender Dimensions of Manual Scavenging’, the discussion was spearheaded by two noted activists – Mr Anand Teltumbde, a civil rights activist who has been a member of many fact-finding teams regarding the atrocities committed against Dalits, and Mr Bezwada Wilson, the National Convenor of the Safai Karmachari Andolan (SKA), an organization that campaigns for the eradication of manual scavenging. Mr P S Krishnan, a former member secretary of the National Commission for Backward Classes, also presented his views. Dr C Lakshmanan, Assistant Professor at Madras Institute of Development Studies, was the moderator for the discussion.

A majority of manual scavengers in India are Dalits, and of those a significant percentage are women. Indeed, one of the main themes of the discussion was the prolonged presence of social injustice in Indian society. All three speakers strongly agreed that social oppression is the leading cause for the persistence of the ‘disease’ of manual scavenging.

As a poignant reminder of this shame, a photograph of a public notice by a government agency on the 3rd July, 2013 edition of the Hindu was projected onto the screen, which solicited the services of manual scavengers, even though a law was passed in 1993, The Employment of Manual Scavengers and Construction of Dry Latrines (Prohibition) Act,1993, outlawing all forms of manual scavenging. 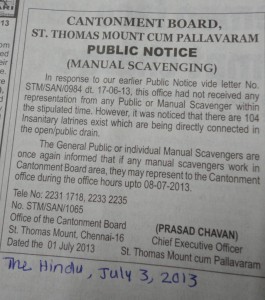 Advertisement in a newspaper soliciting the services of Manual scavengers

He provided an example from his own personal experience when three people died of toxic waste exposure while cleaning a BP plant, but no action was taken against those responsible. Society, he felt, lacks sympathy for these people since they are quietly assumed unequal to us. The core question he raised was – ‘Is manual scavenging really that difficult to do away with?’ His answer was a resounding no – there is only a need for some political will, he says, and it can be removed from our society in a short time.

Mr Wilson chose to address its inhumane and derogatory aspect, providing his own experiences. He was born to parents who were scavengers themselves, and spent his early years in poverty – often wondering where the next meal would come from. Uneducated, his brothers and sister were also forced into scavenging. By the time he was born, his mother had resolved to protect him from it, and he escaped the plight of his siblings. He went on to reveal that once, when he was on a routine visit to the Press Club in Delhi, he was called a ‘Bhangee’, a derogatory term for manual scavengers, by a lady behind him. On confronting her, he was told that he was known by most people around there by that name. Even though he had never himself done any scavenging, he said emotionally, he had been labelled one by society; no matter what a manual scavenger, and indeed a Dalit, does, social stigma and persecution will always seek him out. He pointed out how society even goes on to label this as usual and normal, even trying to glorify manual scavengers’ work, just to wash their own hands clean of the issue.

Wilson then talked about how he had one image of himself, moulded by his own thoughts and ideals, and how society has a contrasting one, formed by their prejudices against his caste. In a society where the dignity of ‘lower castes’ is systematically destroyed, scavenging cannot be done away with.

He also expressed skepticism about India’s judicial and administrative setup – the Supreme Court postponed his organisation’s case dozens of times over many years; IAS officers declared that there was no manual scavenging in their districts, ignoring evidence to the contrary.

He ended on an interesting note – that there were female manual scavengers who had submitted the ‘93 act to District Magistrates, and pointed out that their employment activity was prohibited by law. Is it not these Women Safai Karmachaaris who were upholding the sanctity of the Parliament he asked. When they were bent on protecting democracy, is it not our turn now? One was forced to introspect as he let these questions hang in the air and left the podium.

At this juncture, the SGS played two videos. The first, made by Rashtriya Garima Abhiyan, portrayed the struggle faced by scavengers in attempting to be free of their social tag. The second was shot at Chennai Central Station, showing manual scavenging going on in plain sight, even when the Railways deny employing manual scavengers. The video was recorded by FAMS (Forum Against Manual Scavenging), a group of students from MIDS, IIT and ACJ, who were instrumental in organising the discussion.

Mr Krishnan, a surprise addition to the discussion, then took up the podium and began by stating that the issue of manual scavenging is part of a larger issue of the creation of ‘underclasses’ by the Indian caste system. The problem has legal and political aspects, from the impotent committees set up by successive governments to the lack of political will in the Scheduled Castes’ and Scheduled Tribes’ Ministry. The ‘93 act too, he said, lost power over the years due to conflicting ministerial orders.

On a more positive note, he listed out a number of possible solutions. The definition of manual scavenging must be made broader, he said, and all past and present scavengers, active or not, must be included in this definition. Then, the government must work towards their upliftment by education. He gave the example of Andhra Pradesh, where schools meant specifically for SC/ST sections, established in the ‘70s, now have an almost 10% higher 12th board pass rate than normal schools.

He also asserted that both aspects of manual scavenging – demand and supply – must be simultaneously dealt with. People availing of such services must be punished by a strong executive law, while manual scavengers must be provided alternate occupation and social upliftment. With a strong political and bureaucratic will, the blight of manual scavenging can be eradicated in a few years, he opined.

The discussion was attended by only a few, but it deserved a larger audience, since the issue begs for attention in India’s quasi-democratic, ruptured society. Dramatic improvements cannot be brought about overnight – but the larger issue at hand is our attitude towards the problem. Once Indian society gets that right, no change is impossible.

A student of IIT-Madras and a self-confessed addlepate, finds solace in agnosticism and idealism. Temperamentally inclined to brood over superfluous philosophy, has embarked on a delusional pursuit of inner peace. Also reads books, plays COD and football and occasionally indulges in attempts at socialising.