We were at a National level advanced training program for demystifying miracles on the 20th of August when one of the activists of the Maharashtra Andha Shraddha Nirmulan Samithi who was a participant showed an SMS which simply said Dr.Narendra Dabholkar shot dead. It was a terrible shock to us to hear that. He had been at the forefront of a movement to make this society a better, more egalitarian one. He had spent his whole life in the service of the society giving up what would have been a lucrative career as a medical practitioner.

As he said, my wife can look after my nursing home and I shall do my work for the movement and the way he did it. He was always busy at his office at Sadhana Publications attending to visitors, drafting letters, making write ups and directing his activists. He was such a meticulous planner that the organizations was running a bus which would have a time table set for a year in advance to visit schools in villages to spread scientific temper. He worked tirelessly to build up the movement and had told me that it was his life’s ambition to see a unit of his organization in every village of the area of Maharashtra where his organization was active. In fact when Johannes Quack from the University of Frankfurt wrote a book on the Indian Rationalist movement- disenchanting India- the major portion of it was about the organization headed by Narendra Dabholkar- the Maharashtra Andha Shraddha Nirmulan Samiti. He spent a few months with them and wrote extensively about their meticulous work in bringing about an attitudinal change in the superstition ridden villages of this region. He worked for the movement one village one well in which the caste system was to be attacked by having a single well for the use of people of all castes and communities. He worked hard- in fact had been trying for it for more than a decade to bring on a bill to make black magic as a criminal offence to deter unscrupulous people from cheating the gullible by the practice of what can be called as ‘black magic’. His efforts were thwarted each time by the vested interests who had felt threatened by a law which would prevent them from exploiting the society.

He was one of the staunch supporters of FIRA and had organized its National Conference at Pune on a  grand scale at Pune in 2007. It was a well attended affair and sadly the last one attended by the founder of FIRA, the late B.Premanand. However, Narendra Dabholkar’s one wish was not fulfilled in his life time. In one of our meetings he had asked me about organizing an international rationalist meet. He was keen to have the experience of organizing such a one at Pune and was asking me about the details about how to go about it. Some years back he had been presented with the award for doing outstanding work for science popularization by the NCSTC. Some of the senior members of his organization had made discrete enquiries with me that they would like him to move to the national level and whether I had any objections to that. I had replied that he would be very, very welcome and I would be the happiest if that were to happen. After a few years I asked him when that plan would materialize and his reply was that only after he had a unit in each village that he would think of moving out of the state! Alas, that was never to come.

I was conducting the national advanced level program for training of volunteers working in the field of demystifying miracles and scientific temper when we received the terrible news from the members of his own organisation Maharashtra Andha Shraddha Nirmulan Samithi. All present were shocked by this and passed a unanimous resolution condemning it. 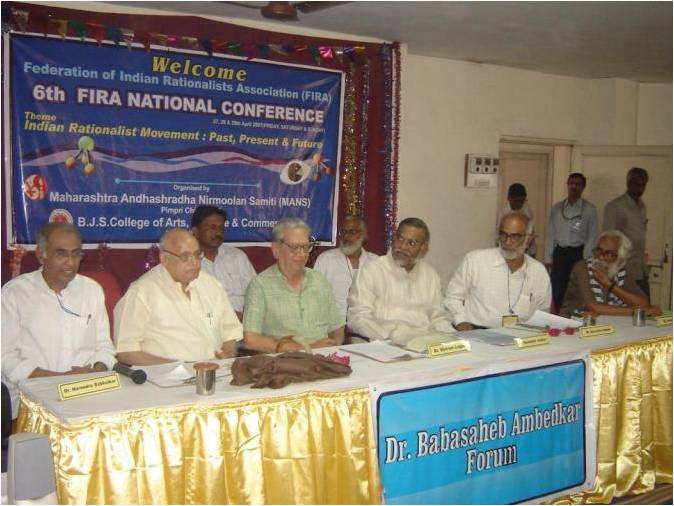 Narendra Dabholkar (extreme left) and Narendra Nayak (second from right) on a panel in the 6th FIRA national Conference.