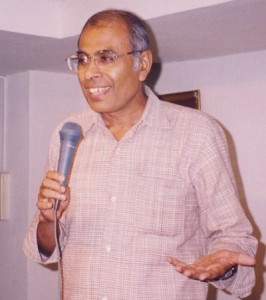 Dr.Narendra Dabholkar, a well known rationalist and anti-superstition activist from Maharashtra was shot dead in Pune on 20th August 2013. He was the Founder of the Maharashtra Andhashraddha Nirmoolan Samiti (Committee for Eradication of Superstition in Maharashtra). The Humanist community is shocked at this mindless violence. Narendra Dabholkar, a doctor by profession had dedicated his life to the cause of rationalism and humanism. He spearheaded several campaigns against superstitions and was involved in caste annihilation programmes. Narendra Dabholkar was campaigning to get an anti-superstition bill passed by the Maharashtra Government. A day after his death the Maharashtra state government cleared an Anti-Superstition and Black Magic Ordinance. The law seeks to make it punishable for self-styled godmen to prey on people by offering rituals, charms, magical cures and propagating black magic. He had made powerful enemies and had faced protests against his work.

Narendra Dabholkar also campaigned against rituals that harmed the environment. He won the court judgement that mandated all Ganesh idols to be made of clay and natural colors in Mumbai, where Ganesh is worshipped more fervently than anywhere else, and idols made using plaster of Paris and fluorescently bright paints which are environmental hazards and are dumped in the ocean in huge numbers every year. He became involved with movements against casteism and supported social justice for Dalits, such as Baba Adhav’s “Ek gaav, ek panavtha” (One village, one well) agitation. Dabholkar was the editor of a renowned Marathi weekly Sadhana, which was founded by Sane Guruji.

Dabholkar had several qualities which made him a revered figure among the Maharashtrian populace brought up on the Phule-Shahu-Ambedkar philosophy. For someone trained in the socialist milieu of fifties and sixties by the greats like Sane guruji,Mr. S.M.Joshi,the journey from medical profession to full time social service was natural and seamless.The various battles for social justice and empowerment of the masses he undertook were imaginative and inclusive – be it the debunking of Nirmala Devi or Parvati Ma or Sathya Sai baba, the Shani Shinganapur movement for the equal rights to women in religious matters, his support to other activists’ movements like those of Medha Patkar, Baba Amte, Baba Adhav, Abhay and Rani Bang.

A man never known to lose his cool in face of the most severe adversities, he was waging the war for the anti-superstition bill for eighteen long years. When he received a few years ago,a substantial sum of ten lakh rupees as token of appreciation for his selfless service, he did not think twice before giving it away to the movement. He never once talked about the personal sacrifices he made.Today the movement boasts of thousands of activists, many of them full timers who will not allow the baton to drop- a testimony to Dr.Dabholkar’s formidable organizational skills

Article 51A(h) of the Indian Constitution enjoins every citizen of the country to develop scientific temper, humanism and the spirit of inquiry and reform. Narendra Dabholkar was doing exactly that and it is terribly unfortunate that his work was cut short by such a dastardly act. We condemn this brutal killing and avow to carry his work forward.

If they think by shooting one of us they can stop the movement they are wrong – we shall fight harder. Salute to Narendra Dabholkar, a martyr to the cause.

Nirbhay bano! Lets fight ‘Censorship of Thought’. Be brave enough to Stand up against All Religious Terrorisms

Dabholkar comes in the tradition of those bold thinkers who tried to give greater meaning to human life. Rationalist like him do not assume that they have answers for all the questions that humans can and do ask. But where we do have answers, elegant and demonstrable, it is our responsibility to share this knowledge and convince others. Otherwise every easily explainable phenomenon can be turned into a mystery or miracle and become a powerful tool of exploitation.

The cumulative effects of such superstitious beliefs can build powerful organizations that not only exploit but also keep minds locked up in dark chambers of fear and hopelessness. This becomes fertile ground for fundamentalism, prejudice and hatred. It is one thing to ponder over, even cherish, our past beliefs and learn how and why they evolved and shaped human cultures. But it is another to swear by them as infallible and everlasting truths.

We owe it to all people, especially the young to live in a world where the mind is free to explore without the constraints of imposed dogmas,blind faith and threat of any kind. Silencing a gentle soul like Dabholkar with an ultimate cruel act of violence deprives humanity of the light that a few bold persons are willing to spread on a path, dark and confused.

I did not know Dr. Dabholkar personally, but of course I knew that he was reputed for his activism in highlighting the harmful effects of superstition, in particular the practising of barbaric acts and the brainwashing of gullible people by charlatans under the guise of ritual. In eliminating this brave spirit, the perpetrators have dealt a serious blow to the welfare of ordinary citizens by silencing a voice that spoke loudly and clearly in the cause of reason and rationality among human beings. This brutal and most reprehensible act will be condemned by all right-thinking people with a sense of morality. Remembering Dr.Dabholkar’s message of reason and taking it to heart would be the best way of commemorating him and his noble cause.

A great set back and irreparable loss to the world of science, reason and freethinking! Some four months back, I had a telecon with Mr. Dhabolkar. He was so enthusiastic about his future action plans and dreams, it made me feel as though I was speaking with a spirited youngster on his dreams!! Mr. Dabholkar’s relentless work among the needy masses, contributions to the realm of scientific thought and his endeavors to use law as a weapon to combat superstitions and blind belief will remain green in our hearts !!

This fight will go on. As even in trying to eliminate the person who opposed the irrationality the irrational elements have had to resort to weapons of rationality (not a much-vaunted mantras and incantations of dark power but a bullet), it implies a victory: A resounding victory for rationalism. Every fighter of rationalism knows they carry this risk as it hurts the money, power and ascendancy acquired through corrupt means through crime against humanity. We are not afraid of that. What we are afraid of is leaving behind a world without the beacon of reason. Their ultimate sacrifice will give rise to more and more Narendra Dabholkars. We salute you and all that you have stood for in your active social life as a change agent and we unite ever so strongly to not to let your death go unrepented. The fight against irrationality will now be fought on more grounds and more fearlessly and fiercely than before.

A good and just man, a great human being, and one who was an inspiration to many has been cruelly snatched away by cowardly criminals who used assassination as argument.

It shows what a threat the gentle Dabholkar ji was to the forces of unreason. But the senselessness of it all – and the full implications of the calamity that has befallen us – will take time to sink in. How safe are the other officers of the Andha Shraddha Nirmulan Samiti?

That the Maharashtra Government rushed to issue today an Ordinance against the perpetrators of Black magic is a tragic success and an indication of the moral force Dhabolkar ji commanded in life and death. How are we to react to his refusal of police security saying his workers who do not have it would be exposed to danger if he was protected … the world is poorer for the loss of such nobility.

Dabholkarji’s life and his martyrdom places him alongside the great fighters for human freedom who are up in the skies lighting up humanity’s dark night with their star light.

With a heavy heart, and with no way of knowing how to console ourselves,
Babu Gogineni

Shekhar Sathe, Retired finance professional, columnist and volunteer with the Granthali literary group
Dr. Narendra Dabholkar’s murder is a shocking event and vividly shows the direction in which the fundamentalist elements in our society are trying to push us. While firmly opposed to malpractices, cheating and exploitation of gullible people he never advocated suppression of religious freedom. His arguments were always well reasoned. Way back in the early seventies as a young lad he had confronted Shankaracharya Chandrashekar Saraswati in an open debate in Satara. When the mathadhipati discovered that the discussion was being taped (those days tape recorders came in big boxes!) he terminated the event and soon thereafter decamped from Satara. It is unfortunate that godmen and their henchmen have a field day even today and many people still fall victim to ritualistic chicanery which is not specific to only hindus. Hopefully, Dr. Dabholkar’s work will continue to inspire many a rationalist and his contribution towards cleansing our social life will bear fruit.