The meet up this time was at an all new place – The Thyagaraya Nagar Social Club which had enough provisions to make presentations and a wonderful open discussion. A total of 13 members including 2 new members attended the meet. Prem Jeevan, who is a software engineer at a private sector company was born and raised in a Christian family. The logical fallacies in the Bible turned him quite skeptical through the course of time and he began questioning himself as to why he necessarily has to stick on to a religion which gave him no good answers. As days passed and months rolled by he ended up an atheist and a freethinker. He was introduced to Nirmukta and Chennai Freethinkers through Facebook while he was looking for Freethinkers’ groups over the social networking site. Parimala Panchatcharam, another new member was introduced to the group through Geeta Charusivam. Parimala, who is an activist was always inspired by the books of Periyar and eventually took up reading extensively on science and philosophy.

Sai Sanjay, an enthusiastic, young member of Chennai Freethinkers, made a presentation on ‘Evolution and Natural Selection.’  The cover of the presentation had Charles Darwin posing at one corner and the tree of Human Evolution at another corner. Sai introduced him to the rest of us and began with his presentation. He first explained the term evolution as ‘the change in the inherited characteristics of biological populations over successive generations due to random mutation.’  He then explained the phylogenetic tree of life. With the next slide he explained the evolution of eukaryotes and also talked about vertebrates, amphibians, reptiles, mammals, dinosaurs, cryptogams, phanerogams, aves and the first hominids. 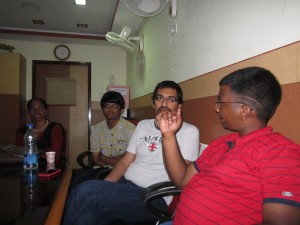 Sai then explained mutation as ‘a permanent change in the DNA sequence of a gene that can alter the amino acid sequence of the protein encoded by the gene.’ He then differentiated point mutation from random mutation with analogies and illustrations. Ganesh brought in more illustrations to explain random mutation. He also helped everyone better comprehend what the phrase ‘Survival Of The Fittest’ meant. Sai progressed with the presentation and explained Natural Selection  which meant organisms better adapted to their environment tended to survive and produced offspring. This was in turn explained better with anecdotes from Darwin’s own observations. Sai then opened up the most interesting and enlightening part of the presentation: Human Evolution. It showed briefly the tree of succession of species right from Australopithecus afarensis through Homo neandethalensis and Homo sapiens. With a couple of other slides on Charles Darwin and a slide on the structure of Chromosome, Sai concluded his presentation and lecture on the topic. Then followed an interactive session on the presentation.

//Sai then explained mutation as ‘a permanent change in the DNA sequence of a gene that can alter the amino acid sequence of the protein encoded by the gene.’//

He is right about the second part but though mutation is a permanent change there is also something that reverses the changes done to a gene – atavism where an ancestral character gets expressed in a descendant organism. There is another type of mutation called true reversion were a mutation or a change in a gene can be reversed. For eg., you have a wild type bacteria and you subject it to Ultraviolet radiation which makes it a mutant and then when there is true reversion mutation it restores the mutant DNA into its previous wild type. So mutations are not always permanent. There are DNA repair mechanisms which identify the mutations and correct it readily. Like natural selection only the errors that the DNA repair mechanisms fail to correct get wrongly expressed, but even then the cell either kills itself or becomes tumorous leading to the death of the entire organism. So mutation is rare but not entirely permanent.

Soon the discussion phased forth into a session where members tried to analyze the arguments put forward by theists towards the existence of god when Sanjay stated that it is pragmatically impossible to disprove the existence of a god of conventional definition by experimentation but only by logical reasoning. Sriram mimicked the notorious theist statement upon Blaise, saying “Blaise, there is an invisible blue goat just above your head. You can’t see that with your naked eye nor can you sense its presence with your understanding. Move away right now, or it would bladder-void upon you.”  Blaise, was spontaneous with his  response, “I don’t have a problem if the excreta is invisible and odorless too.” And a huge laughter spread through the hall. Russell’s teapot analogy and burden of proof where discussed in detail then. 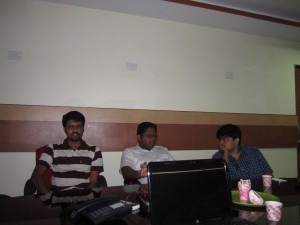 Udhav and Sanjay then initiated a discussion on the evils of caste system and the recent issue on the topic – the death of Ilavarasan. Geeta Charusivam mentioned that this was not the first time  a person from the Vanniyar community married a person from the Dalit community but it was made a big issue now. Sanjay shocked the crowd saying that despite all the ‘love’ marriages happening in Tamil Nadu, according to a study only 2.5%  accounted for inter-caste.  Geeta added that the women of Dalit community are subjected to greater suppression, sexual assaults and harassment as compared with the women from the other communities and that patriarchy operated such that Dalit men too participated in the suppression of Dalit women.  We fervently hoped for the day when the caste system would disappear without any trace.

Geeta shared her interactions with the girls at a hostel where many girls held the opinion that inter- caste marriages won’t work since the culture within a particular caste differs from those within another and that it would be difficult for them to adapt to the new set of tradition, rituals and customs. She also added that she struggled to make them understand that the customs they worried about varied even between families. Madhavan added that apart from the caste system, the education system has also not played any significant role yet in producing quality individuals and human beings. He continued saying that the education system doesn’t do enough to let children face their lives independently once they are adults and that is one reason for most ‘educated’ people to give into tradition and conservatism naïvely.

Sriram shared an anecdote from his interaction with children from a popular school in Chennai wherein he was discussing evolution by natural selection. He had wanted the children to list down the types of classification they make in the class room and in the school in order to make them better understand topics on differentiation of families, orders and classes. A student was very swift in pointing out the classification they make based on castes. Sriram emphasized that the child did that inadvertently and had no real intentions in creating an iron wall of castes. He also mourned the fact that most children there had been made to believe that the children of the so- called lower castes had a low IQ level in comparison with those of the so- called upper castes. These are definitely not part of the curriculum they learn at school but a vile idea imparted by the society we live in. 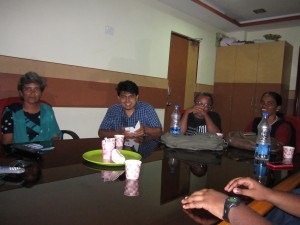 Parimala recounted her experience  while learning Parai lately. She pointed out the intricacies and difficulties in learning it. She noted that Parai is difficult to learn in comparison with the other familiar percussion instruments. Parimala felt bad as to how the fine art has been confined to just one community and that they too were treated with disdain. Venkat regretted that his wish to learn Parai was discouraged by a friend who said,“There won’t be a good reception in our community if you try to learn it. Why would you want to learn it anyway?” Geeta subsequently narrated her difficult experience when she organized a program for the NGO Makkal Mandram  involving Parai.

It is learnt from the ancient Tamil literature Kurunthogai that Parai was once considered an auspicious instrument and played during weddings. It was also used while making announcements in villages and towns. It is sad that the instrument is treated with such contempt. Fortunately the Parai finds a place at the  Virtual Instrument Museum of the Wesleyan University. Please check out these two videos to get a taste of the upbeat Parai music.

As for our meeting, we discussed a few more issues on casteism and then we had a quick discussion on Evidence based Medicine versus AYUSH (Ayurveda, Yoga, Unani, Sidha and Homeopathy.) That concluded our meeting and the group dispersed but a few members lingered to continue their discussions before finally bidding their goodbyes too.

I believe in a billion plus one gods and am a pious devotee of them all. If you believe that could possibly be a case of human existence, I'd presume that you're not very much used to sarcasm.
A science addict and a freethinker, who had to give into the usual Indian anecdote of "B. Tech or M. B. B. S", after high school. A quintessentially heretic blasphemer and atheist, technically ignostic. A scurrilous despiser of malevolence, misogyny, misandry, nationalism, malice, patriotism, racism, religious preoccupation, farce fanaticism and misanthropy.
A boisterously OUT feminist. I write articles for pleasure and causes, and rarely if I do, publish them in my blog. [And the collection of those unpublished ones must be subject to editing on terms of blasphemous, heathen, sacrilegious, impious contents.]
I'm a student who doesn't really mind spending his night on learning something new rather than preparing for my next day's exam

PS: I don't have any paranormal, supernatural, metaphysical or psychic abilities and am as normal as any Homo sapien, to the best of my ken.