The aim of this post is to explain deductive reasoning in an easy to understand manner, by using the example of the popular board game, Cluedo. It touches upon inductive reasoning also. It assumes some familiarity with the concept of validity of an argument. The primer How to Argue Online offers a quick explanation of this. Some good further reading for this is Coursera’s enormously popular course Think Again: How to Reason and Argue, and the book Understanding Arguments: An Introduction to Informal Logic. 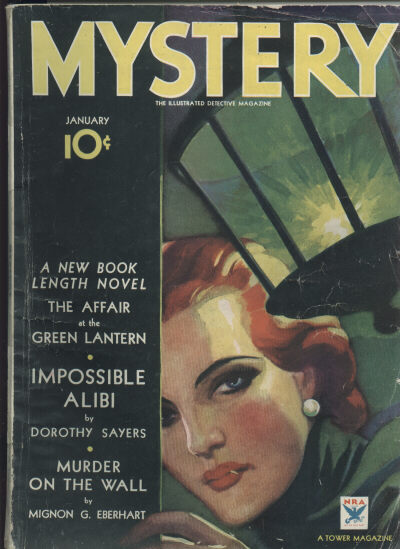 Cover of the pulp magazine Mystery (January 1934) featuring The Affair of the Green Lantern, Impossible Alibi by Dorothy Sayers and Murder on the Wall by Mignon G. Eberhart. The cover also shows a sketch of a film noir-ish woman with a lantern next to her face. (Image in public doman, via Wikimedia Commons. Links to source.)

Let’s take a look at the reasoning involved in the old board game, Cluedo. In the game, players try to figure out 3 things: the identity of a murderer, the murder weapon and the room in which the murder was committed. They do this by a process of elimination – they make “suggestions” to each other and cross off cards which other players have (and which they themselves have). Once they’ve eliminated all the other options, they make an “accusation”: e.g.

“I accuse Reverend Green, with the Dagger, in the Library”.

Now there are 6 suspects, 6 possible weapons and 9 possible rooms, which means a player needs to eliminate 18 cards to arrive at their accusation. So an argument leading to the above accusation (for example) can be laid out in standard form as follows:

19. One of Professor Plum, Colonel Mustard, Mrs. White, Mrs. Peacock, Reverend Green and Miss Scarlett has to be the murderer. (SP)

20. One of Candlestick, Dagger, Lead Piping, Revolver, Rope and Spanner has to be the murder weapon. (SP)

21. One of Ballroom, Kitchen, Conservatory, Dining Room, Billiard Room, Library, Hall, Lounge and Study has to be the murder room. (SP)

This is a clear case of deductive reasoning, because the argument is clearly intended to be valid (i.e. if the premises are true, then the conclusion has to be true) and in fact it is valid. Note how the rules of the game, which rule out other possibilities, are added as suppressed premises (SP) 19 to 21. If 18 out of the 21 cards have been eliminated, and no other cards are possible, then the remaining 3 must be correct. Mystery solved!

Now let’s dig a bit deeper. Look at each of the premises 1 to 18 above – e.g. “It wasn’t Professor Plum”. This premise is itself the conclusion of a mini-argument! This mini-argument takes one of two forms:

1. X showed me Professor Plum when I suggested it. (Where X = another player in the game.)

1. I have Professor Plum.

This reasoning too is deductive – if another player showed me a card, or I have that card myself, then that card cannot be a murder card. I.e., the argument is valid. If one of these events occurs during the course of the game – i.e. the premise really is true – then the conclusion is true too. I.e. the argument is not only valid, it is sound. And if this is true of all the premises 1-18, it means my accusation is correct and I win the game.

Does Cluedo only involve deductive reasoning then? Not necessarily! Because quite often while playing Cluedo, you don’t wait until you’ve eliminated all but 3 items. Imagine that X happens to be one of your dads, a big sweetheart who’s hopeless at strategy in games like this, and you’ve narrowed down your choice to two cards, and you reason as follows:

1. X is making repeated suggestions in the Library.

2. X is hopeless at strategy in games like this.

4. I know it’s either the Dining Room or the Library.

Or, maybe I’m not the most honest player around (ahem)…

1. I’ve narrowed it down to the Dagger and the Candlestick.

2. Out of the corner of my eye, I saw one of X’s cards and it looked like the Dagger.

Now contrast these mini-arguments with the earlier deductive mini-argument. The conclusions are similar – they either rule out a particular card or declare it a murder card. But the premises differ a lot. The latter mini-arguments are instances of inductive reasoning. The arguments aren’t intended to be valid – I know that even if my premises are true, my conclusion can be false. These arguments can be weakened by the addition of further premises. Maybe X has wised up to playing these games and is just acting innocent. Maybe my eyes played tricks on me. Maybe my eyesight is unknowingly imperfect. So, I’m only arguing based on likelihood or probability – the essence of inductive reasoning.

So looking at the main “outer” argument again, we can now see that in can involve both deductive and inductive reasoning.

To end with, here’s an exercise – what kind of reasoning do “locked room” murder mysteries involve? Like Murder on the Orient Express and The Speckled Band?