Last week, I attended a students’ conference, organized by a University of Medical and Health Sciences.  Although this University is located outside India, a significant proportion of the teaching staff and a vast majority of the students are from the Subcontinent.  The organizers of the conference decided to have Cancers in the local population as its major theme.  With breast cancer being the most common malignancy among women in this population, a lot of the students opted to do their research on this form of the disease, and presented some very useful results1.  In each of these, however, the talk and the discussion following it would inevitably lead to Angelina Jolie. 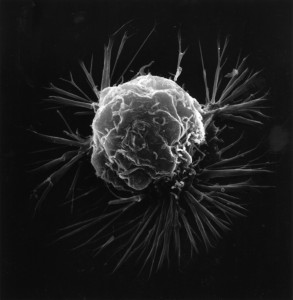 If you’ve been living under a rock in the past month and missed all the recent hoopla over Angelina Jolie, here is a bare outline. Jolie has a mother who died early as a result of ovarian cancer.  She (Jolie, that is) got herself tested for genetic susceptibility to cancers, and found out that she had a defect in the BRCA1 gene which is known to increase risk for developing breast and/or ovarian cancer.  She chose to have risk-reduction surgery, which in this case meant a total removal of tissue from both breasts, followed by reconstructive surgery.  Back at the conference, the students were actually quite supportive of Jolie’s decision and used her case to generally call out for genetic testing for at-risk women.  Surprisingly, some members of the audience (which consisted totally of students and teachers of health sciences) were not so convinced that surgery was really called for in this case.  I got pretty much the same comment from a few friends, all of whom are life science researchers, some of whom are or have previously worked with studying the molecular basis of cancers.  Their argument was that it is unnecessary and foolish to undergo surgery without the cancer actually developing.  Now, coming from a layman’s mouth, I would consider this to be a fairly reasonable objection.  But I find it baffling how oncologists, researchers, doctors, teachers and medical students are incapable of understanding and evaluating risk.

It is the same with commentaries and opinions in the media, which has been abuzz with opinions and editorials.  Thankfully, most pieces seem to treat the news positively, acknowledging that not only was it a brave thing for her to do, it was also empowering, informed, and the right thing to do.  Some of these commentaries are well worth a read, and I’d like to encourage you to read at least a few of them here, here, and here.  It would have been beautiful if that would have been all there was.  Celebrity makes an informed decision and chooses to get her breasts removed in an attempt to reduce her risk of developing cancer.  But for some, it clearly isn’t as straightforward.  The most visible of this pack is NaturalNews.com and its Editor, Michael Adams.

NaturalNews is ‘The Lancet’ of quack medicine and Adams who likes to call himself the ‘Health Ranger’ is the Linda Goodman of quackery. This online magazine is full of health related advices and opinions on how a lemon detox diet is the best thing since Adam to cleanse your body, how vaccines are a big hoax perpetrated by the Government to systematically destroy your immune system, how soaking up a bit of sunshine everyday is the best thing you can do to reduce your cancer risk, and how every scientist who speaks in favour of GMOs is nothing but a “homicidal maniac”.  It is also full of conspiracy theories on anything that can be conspired; AIDS denial to believing that the BMJ deliberately conspiring to discredit Andrew Wakefield2.  Adams’ take on Jolie’s prophylactic surgery combines both quackery and conspiracy theories.  So, he must be pretty pleased with that double whammy he thinks he delivered.

The evidence for this tall claim, apparently, is that

Angelina Jolie’s seemingly spontaneous announcement magically appeared on the cover of People Magazine this week — a magazine that is usually finalized for publication three weeks before it appears on newsstands.

Is that all? Is it absolutely unheard of for a magazine to change its cover story after finalization if they found a newer story that deserved the place.  And this is certainly the hottest news to hit celebrityville this month. Why would People Magazine let this opportunity go? Secondly, even if we do go with the view that it was a cleverly crafted P.R. campaign, what would be so offensive about it?  The only public opinion it could be designed to influence would be to encourage people to screen themselves for cancer and to consider prophylactic measures.  Why would that be such a bad thing?

But Adams believes there’s more to it than that.  And that’s where the Big Pharma comes in.  There is after all no conspiracy theory related to health care that doesn’t involve the Big (bad) Pharma.

[Angelina Jolie’s announcement] caused women to rush out and seek BRCA1 gene testing procedures. These tests just happen to be patented by a for-profit corporation called “Myriad Genetics.” Because of this patent, BRCA1 tests can cost $3,000 – $4,000 each. The testing alone is a multi-billion-dollar market, but only if the patent is upheld in an upcoming Supreme Court decision…………………….It drove public opinion to influence the upcoming U.S. Supreme Court decision to rule in favor of corporate ownership of human genes

All, for once, true.  Myriad Genetics does hold the US patent for BRCA gene testing.  Irrespective of whether one considers this ethical or not, the real question is this.  Why would the Supreme Court be influenced by public opinion to favor Myriad Genetics?  If anything should come out of the increased media attention and women rushing to test themselves for BRCA mutations, it should be for the Court to take a decision in favor of the Public Patent Foundation and rule that Myriad’s patent does not hold.

Adams goes on to talk about how this is all part of the Obamacare’s conspiracy to gift taxpayers’ money to the companies offering these diagnostic tests.  He also writes in length about how Jolie has falsely magnified her supposed risk of developing cancer.  The first of these arguments is silly.  Any responsible health care insurance scheme would ensure that preventive programmmes are covered under its ambit.  It makes much more economic and health sense to prevent a disease that is very likely to develop than to treat it.  In no way does this imply the existence of an evil nexus between the government and BigPharma.

The second point about real risk being much lower is a bit contentious.  I have to pause here to clarify that what I’m talking about here is only in the context of familial cases of breast/ovarian cancer.  Undoubtedly, these cases form a minority of all breast cancer cases.  But they do exist, and it is only in such cases that genetic testing has any real significance.  Coming back to risk, there is a certain amount of variation among lifetime risk estimates for women with BRCA mutations developing breast cancer depending on which study one chooses to refer to.  These estimates range from 62% to 87%.  Adams selectively chooses a study with the lowest risk (Which, as I see it, is a flawed choice.  This is a study that analyzed BRCA mutations in healthy women who may or may not have a family history of breast/ovarian cancer.  This is different from assessing risk for women with mutations who have positive family histories.).  Myriad Genetics, on the other hand advertises data that shows the highest risk.  But in the end, does it really matter which end of this range we use for assessment.  Both are sufficiently high to claim an increased risk.  Even at the lowest end of this spectrum, very simply put, a 62% lifetime estimate for developing breast cancer means that the woman is more likely to get the disease sometime in her life than not.  Case-control studies that analyse the efficacy of prophylactic mastectomies clearly show that the procedure lowers the risk of breast cancer by 90% in women with BRCA mutations.  Adams’ solution, meanwhile, is to eat cauliflowers and soak up some sun.

A little bit of Indian perspective here.  There really have been no large-scale studies done on assessing the frequency of BRCA gene mutations among Indians, which makes it difficult to assess the precise risk in our population.  But it seems that BRCA1 gene mutations might be responsible for a lesser number of familial breast cancer cases among North Indians, but not among South Indians, when compared to Caucasian populations.  It’s also worth considering that genetic testing for BRCA mutations is not easy in India.  At around Rs. 50,000, the tests are expensive (although significantly cheaper than in the US), probably not covered under most health insurance schemes, and offered at only a few laboratories across the country.  There is also the question of what to do if the test result comes back positive and places one in a high-risk group.  There are obviously several options available from increased surveillance to chemoprevention and risk-reductive surgeries.  For women with positive family histories who cannot afford the test and/or the preventive options, regular screening, which includes breast self-examinations, annual clinical breast examinations, and regular mammograms, is the way to go.  Even the most expensive of these, the mammogram, is relatively cheap and affordable at Rs. 600.  Irrespective of the risk, breast self examinations and annual clinical examinations for all women, and mammograms for women over the age of 40 should be a must3.

There is one final point I have to make before wrapping up this write-up.  I find a strong thread of sexism running through this entire episode.  Consider this.  Every year, millions of men are screened for prostate cancer, and at the earliest signs of this disease, many of them subject themselves to treatment options, including prostate removal surgeries.  Recent studies (1, 2) indicate that these surgeries do not affect prognosis at least in the localized forms of prostate cancer, and in fact cause serious issues like impotence, infertility and incontinence.  Compare this to a Jolie type breast removal, where the reduction in risk afforded by the surgery is clearly calculated.  There are no known side effects to removing your breasts, apart from those associated with concerns related to one’s body image, attractiveness or sexuality4.  And yet, overtreatment for prostate cancer continues, while mastectomies are cried down as being too radical.  What is so sacred about a woman’s breasts that they need to be preserved even in the face of likely risk to life in the future?  Maybe we ought to ask some of these people.

Pratibha is a life science researcher working on human genetic disorders. She believes she's doing her bit to keep that 'candle in the dark' lit.