Twenty-three people showed up for our May 2013 meet, held on the Cubbon Park grass outside the State Central Library. Twenty three (and four of them were bang on time)! On the agenda for the day were the Bangladeshi atheists, and parody religions. We did talk about that, but it became hard to manage in such a large group and discussion veered into other atheist subjects, like strategies for activism, experiences of coming out, and the upcoming Hug an Atheist Day. It’s difficult to say more about what we said, because we were all over the place. But pictures being worth a thousand words and all, here’s a lovely picture: 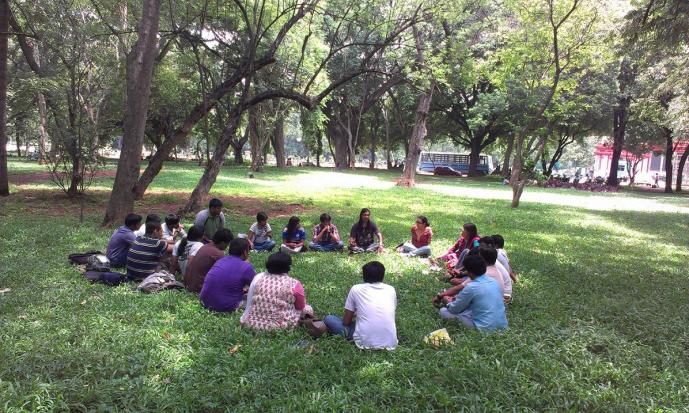 Group members sit in a large circle on the grass, surrounded by trees.
The library building can be seen in the background.

There was a nice moment at the end, when a woman came over to the group to introduce herself – she had been in a group nearby, rehearsing a play on street harassment, and had overheard that we were a freethinkers’ group so she came over to see “what you’re about”. After the meet, fifteen of us hopped across to the Coffee Day Square for some much-needed food and coffee. These “after-meets” have become something of a Nirmukta tradition, and it’s especially nice to be able to speak to people who didn’t get a chance to speak during the meet. For future meets, we’re going to come up with a more structured meeting – e.g. people giving talks or presentations – and are going to look into venues for the same. So if you’re in the city and you support science, freethought and secular humanism, come join us.