After the creation of a Facebook group of Nirmukta Indore and interacting online with its members for sometime. 4 members finally decided to meet. Tauhid Alam, Yusuf Shakir, Agraj shree Jaiswal and Vivek Soley  met  at the Indian Coffee House, at the BCM Heights  on Sunday 7th April.
Beiing the first meet it was decided to to keep it a casual one with the purpose of getting to know each other. Agraj a young software engineer said it was the first time he could interact with people of similar views and that it was very exciting. TA said he was he always had problems with the incompatibility of common sense with religion. YS  too thought that the views propagated by religious leaders did not pass the test of science. Vivek who is more interested in the scientific exploration noticed that Science is the best tool ever devised , for understanding how the world works
The small group had a great time talking on various subjects from astronomy, astrology and  on why people choose to follow or leave a religion., 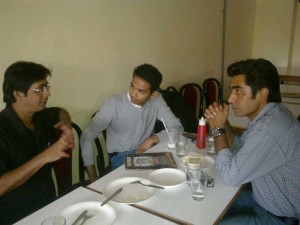 It was decided that more such meetings with a proper agenda and with more members would be a regular activity in future..
Join the group to stay updated.
All Nirmukta meetup groups.