If you spend any amount of time online, chances are you have been involved in online debates and arguments. Sometimes these things go well, but more often than not it’s a “comment trail war” where multiple participants say all kinds of things and no one is clear what the other person is saying. A hundred-plus comments and several hours later, you’re sitting at your computer dazed and angry, wondering – what’s happening? How did I get here? What time is it? A recent course on Coursera titled Think Again: How to Reason and Argue provided an excellent education on the vital skill of argumentation. Learning these skills offers a way out from (or at least an improvement on!) this mess. Here is a primer based on what was taught during the course. 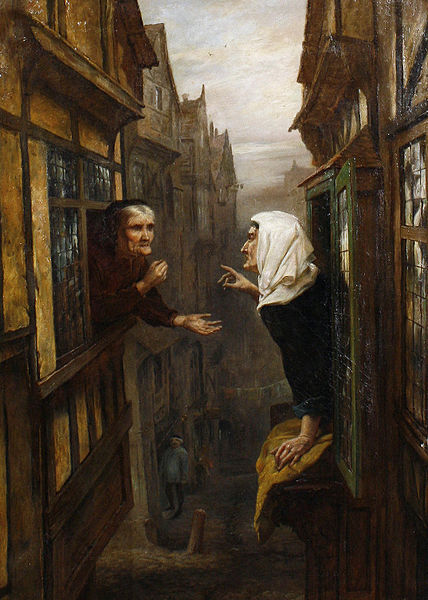 “An argument from opposite premises” by Ralph Hedley. The painting shows parallel rows of houses along a narrow street. In the foreground, two women lean forward out of their respective windows, almost at touching distance. They are talking to each other and gesticulating. (Image in public domain, links to source.)

Let’s dig into this a bit. First, what do we mean by “statement”? Think of a statement as a kind of declarative sentence. Here are some examples:

Hydrogen is an element.

That flight was really comfortable.

So, let’s consider the first proposition we wrote above: “Hydrogen is an element”. By itself, it is not an argument. But consider the following sentence:

Hydrogen is an element, so it belongs in the periodic table of elements.

The philosophical term for such reasons is premises. An argument, then, consists of one or more premises and a conclusion.

2. How Do I Know if Someone is Arguing?

Now let’s look at the two most common kinds of arguments: justifications and explanations. Nearly all arguments you will have online and in real life are of these two types.

Justifications are when you try to give good reasons for believing something. You’re trying to convince people of the truth or likelihood or “oughtness” of some conclusion, and you’re giving premises to back it up. Moral arguments (arguments where the conclusion is a proposition of value) tend to be of this type, but factual arguments can be also. For example, consider the following conversation:

“The volume of my body is 50 litres.”
“Nonsense! That can’t be right.”
“It is! I did an experiment in a bathtub where I measured the water displacement.”

Here the first person justifies the conclusion (the body volume) with a good premise (the measurement by water displacement).

Here the thing to be explained is the hole in the ceiling – it is already known to be true. The purpose of the argument is to explain why it’s true, and here the two people offer competing explanations to it – one being mice, the other rain.

Sometimes it is hard to tell justifications from explanations. Consider the following remark:

“We’re going to reach the theatre late. Look at all this traffic! I told you we should have left home early.”

Clearly something is being argued here, but it is not immediately clear what. One possibility is an explanation: there is lots of traffic, and we left home late, so we are going to reach the theatre late. Another (and more likely) possibility is that there is some justification going on: we should leave home early, because there is lots of traffic and we will reach places late if we don’t leave early. Without asking the arguer to clarify, it’s hard to tell. That’s why asking for clarification during arguments is a good thing.

People argue using language, and it is not always clear what they are saying. So it helps to write out their argument into a standard form. It is also useful to do this with our own arguments.

Standard form means listing out and numbering the propositions of the argument on separate lines. Premises are simply numbered, while conclusions are numbered and also marked with the numbers of the premises from which they follow. Here is an example of an argument in standard form:

A valid argument is an argument whose conclusion must be true if its premises are true.

Right now you are probably thinking, this is absurd – everybody knows London is not in India, so what’s the point of such a thing? Validity is useful because it lets us evaluate arguments even before knowing if their premises are true. Arguments known as deductive arguments, which we’ll meet in the next section, must meet this criterion of validity.

But surely this is not enough. After all, we want to figure out if the conclusion is true, right? That’s where soundness comes in:

A sound argument is a valid argument whose premises are true.

In other words, sound arguments have true conclusions – because (a) they are valid and (b) their premises are true.

The London argument above is not sound. This is because although it is valid, its first premise “London is a city in India” is false. But what if we were to replace “London” with “Delhi”?

Here we know that both (1) and (2) are true, and we can also see (just as before) that the argument is valid, hence this argument is sound as well. 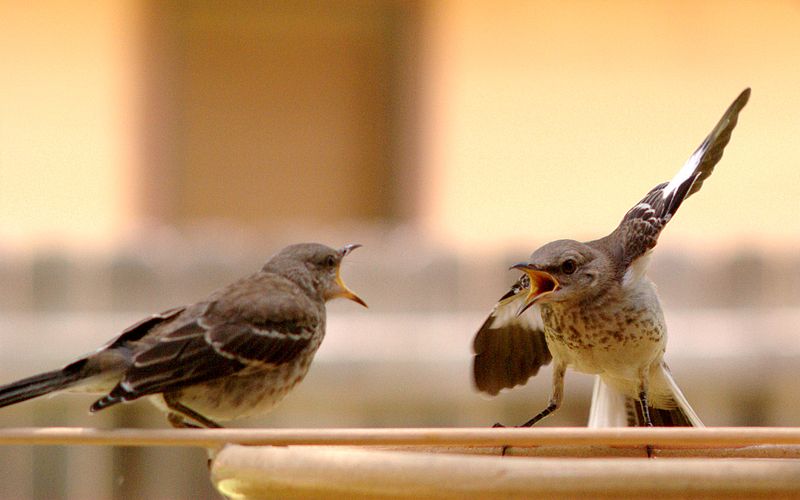 5. Reconstructing an Argument with Suppressed Premises

Earlier we saw what arguments in standard form looked like – they have their premises listed out. But in real life, do we really list out all the premises of our argument? If you think about it, you’ll realise that we don’t – we leave out a lot of assumptions, for various reasons – we might think it’s obvious, or we want to save time, or we think that our listeners can fill in the blanks themselves. These are known as suppressed premises. Note that here the word “suppressed” does not imply a  deliberate hiding of premises (though that can be the case). Just think of them as “unstated” or “assumed” premises. Let’s consider an example:

“X has only been in the company for a year, so we can’t promote X to the position of manager.”

The first cut of the standard form for this argument would be as follows:

Reconstructed like this, the argument is not a strong one. Because there could be other reasons or mitigating factors to justify a promotion, right? So we need to add some suppressed premises to make this argument stronger:

But why, you might ask, should we try to make an argument valid? If you’re the person X above, wouldn’t you want to make your bosses’ argument look as bad as possible? This brings us to an important (and difficult) best practice for argumentation: try to make arguments look as good as possible – even your opponent’s. Because only then can we come to a reasonable conclusion. With the reconstruction above, it might turn out that X has no case for promotion – that it really is the company policy and that that policy can’t be violated. But it could also turn out that exceptions were in fact made to the policy in the past – i.e. premise (2) is not true. But this information can only come to light if the suppressed premise (2) is introduced in the first place. So the basic idea is, add whatever suppressed premises you can to an argument to make it valid, and then evaluate the argument.

Arguments are classified as deductive or inductive depending on the standard by which they are evaluated.

Inductive arguments on the other hand, are not intended to be valid. Instead, their strength  depends on how good their reasons are for their conclusion.

The argument we saw earlier which had the conclusion “Delhi is a city in Asia” is deductive, because it is intended to be valid (and in fact it is valid). In contrast, the argument about the “hole in the false ceiling” is inductive. This is because the explanations offered – i.e. “the mice made the hole”, or “the rain made the hole” – are offered as likely or probable reasons. That argument is not intended to be valid – because it is clearly still possible that the hole was caused by some other reason.

Another important difference between the two is what happens when you add a premise to the argument. When a deductive argument is valid, adding a premise cannot make it invalid. For example, adding any new premise to the “Delhi” argument above makes no difference to it (assuming there are agreed-upon geographical definitions – i.e. obvious suppressed premises!):

The new premises (3) and (4) make no difference to the argument, and can be ignored.

But in inductive arguments, new premises can change the strength of the argument. For example, consider the “mice made a hole in the false ceiling” argument we saw earlier:

What would happen if we added two new premises to it?

The argument has now become weaker. I.e., it now looks less likely that mice made the hole!

Hopefully you have now learnt enough basics about arguments and reasoning. There is plenty more; I recommend you take the Coursera course when it is next scheduled. But for now, here are some suggestions and recommendations to keep in mind while arguing.

2. Before you comment online, ask yourself – “Why am I commenting?” If you’re making an argument, ask yourself what that argument is, and picture it in standard form.

3. When in doubt, ask people to clarify their argument. Ask them to put it in standard form (if they’re not familiar with it, send them here!). But note that when you do this, they are probably going to get defensive. This is especially true in the “must reply NOW” environments of online social media.

4. Be prepared to put your own argument into standard form as well!

6. If the argument is in English, remember that English is a second language for most people – that’s another good reason to ask for clarification first.

7. If you’re writing a blog post or article, ask yourself – “Why am I writing this?” If you’re making arguments, ask yourself what those arguments are, and picture them in standard form. In fact, write them out and keep that outline in front of you. This is especially important in this instance, because blog posts and articles are possibly thousands of words long and arranged into paragraphs. The argument (if it is an argument) forms the “spine” running through the entire piece, and will make it more cohesive and compelling. An additional benefit is that the comments will automatically be more on-topic – people will have less reason to mis-interpret or skew your points and less likely to latch on a particular sentence or paragraph to rail against. They will also have less excuses to troll. Also, make sure the title of the piece is relevant to the argument!

8. Argue against the best and most charitable interpretation of your “opponent’s” argument. In practice this is hard to do, almost impossible. Still, keeping this ideal in mind will automatically make your arguments better.