The March 2013 meetup of the Nirmukta Bengaluru Freethinkers was held at the Coffee Day Lounge on M.G. Road on a hot Saturday morning. There were eight of us present, including two newcomers. We also had a surprise attendee from the Chennai Freethinkers group, who was in the city for the day.

The agenda for the meet consisted of a structured discussion on a particular topic, followed by free discussion. The specific topic for the day was the documentary “Prostitutes of God”, about the “Devadasi” system followed in the south, particularly on the Karnataka-Maharashtra border. In this system, young girls are sold into sexual slavery and prostitution under the ruse of “serving” the goddess Yellama. Here is the documentary for those who’d like to see it (30 min., English captions):

Something all the attendees recognised was the role religion plays here. First, it is part of the deception – as seen in the film, there are girls who are only told at the onset that they will be “serving Yellama”, without any mention of the rape and prostitution. There is ongoing deception as well – the gay man in the film, for example, actually believes that Yellama exists and that he is serving her. As one person put it, putting gods into the picture might serve to justify the practice even in the minds of its victims. Then of course there is the standard protection offered by a religious “layer” – social sanction and protection from prosecution.

The issue of patriarchy and misogyny clearly runs deep in the practice as well. As one of the activists in the film says, girl children are seen as a liability, and the poorest families use this as a means of “converting a liability into an asset”. Casteism runs deep as well – the victims are all lower caste. In one of many disturbing scenes in the film, the film-maker takes two of the girls – one of whom is only fourteen, and both belonging to the Madiga caste – to a sari shop to buy saris. The shopkeeper does not even look them in the eye, and flings saris down at them. As they say later, “We don’t go into the main village because higher caste people there cannot touch us.” A third aspect of marginalisation was sexual minorities. As one of the members put it, it’s a sad irony that the gay man in the film feels some kind of acceptance and a role to play in society by being a Devadasi. We also discussed how notions of “free choice” don’t take into account these systemic injustices. And how some individuals like the successful brothel-owner, herself a former Devadasi, can become complicit in the same oppressive system.

For the rest of the meet we discussed our experiences of being atheists in India, and also things like Hindu nationalism and casteism. One member from a Brahmin background had come “out” as an atheist to his parents only to find that “it made no difference to them” – because they treated Hinduism as a sort of “umbrella” under which everyone lives! He was still strongly resisting his thread ceremony. Several people shared experiences and observations of casteism, for example upper castes who wouldn’t eat at the same table as lower caste colleagues, and people who had “two sinks” in their house, one reserved specifically for lower caste domestic workers. 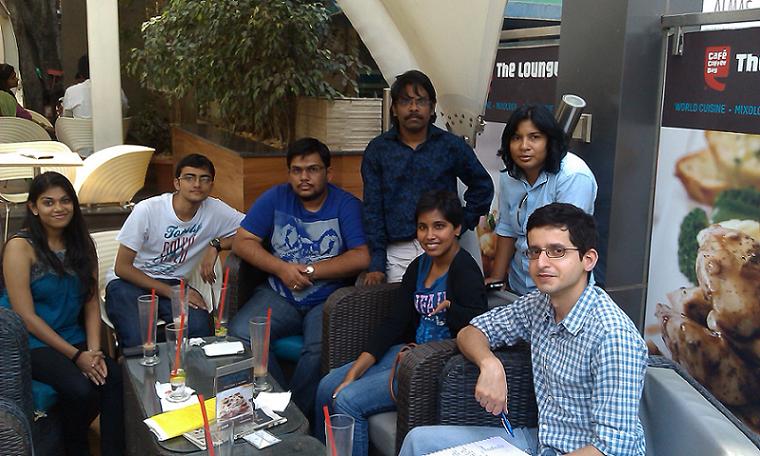 Participants of the meet at the Coffee Day Lounge on M.G. Road

All in all it was a good meet and we hope to have many more. The organisers would like to say sorry once again for the confusion regarding the venue – there are two Coffee Days on M.G. Road, in fact three once you count the one in front of the metro station! And also for not putting up a phone number until the night before the event. We will do better next time.