The 22nd Chennai Freethinkers’ Meet took place on the 3rd of March 2013.   Olga, who had attended our ThinkFest Symposium earlier this year was kind enough to host us at her residence.  Since her house was quite far off for many, we car pooled and hired a cab and went for a drive. 15 people participated in the meet including 3 first time attendees. 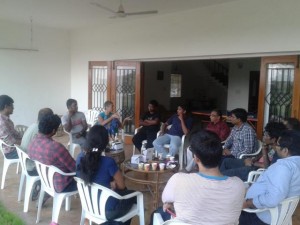 Vivek is working in the US and is visiting India for vacation.  He joined Chennai Freethinkers about 7 months ago and has been following our activities.   He was born into an orthodox brahmin family.  For the past two years or so he started questioning many of the rituals and renouncing them when he could not make sense of them through reason and logic.  He has come out to his parents as an atheist and hopes to come out to his extended family soon.  He came to know about Chennai Freethinkers through Nirmukta. 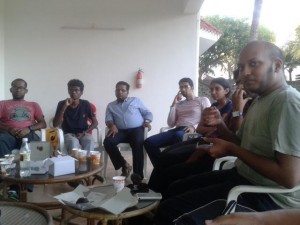 Avicenna Last (pseudonym) is a doctor at a local charity currently working with underprivileged people in a village near Chennai.  He frequently blogs at Freethought Blogs under Million Gods.  Avicenna was very critical of the medical service provided by Missionaries.  He made a clear distinction between missionary work and charity work.  Missionaries, over time make the population they serve reliant on them.  Whereas charities work on a deadline and move on to the next project. He quoted various examples of bad missionary work done in rural areas.  He has witnessed extreme poverty and child malnourishment in states like Bihar and Jharkand, the severity of which is comparable to sub-saharan Africa.  In fact India has more people below the official poverty line of $1.25 per day than many African countries, noted Avicenna. 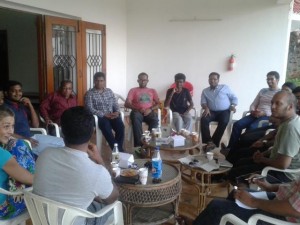 Bharath, has been a non-believer since 2009 when he read Carl Sagan’s Demon Haunted World.  When asked about coming out to his family he said his father was a communist.

This started an interesting discussion about whether Marxism too has become a dogmatic ideology.  Olga remarked that the communist leaders and bureaucrats  themselves do not represent Marxism.  They just captured the flow of change in society to come to power.  She noted that in any social upheaval, the revolutionists themselves die in the revolution.  Hence the saying “Revolution eats its own children”.  We must observe Marx’s writings in the correct social and historical context, noted Olga.  She wondered if perhaps a different system or model of implementation would have worked for Marxism.

Avicenna pointed out that even though a communist society is a class-less society in theory, it is still divided into bureaucrats and non-bureaucrats.  However communism was ahead of its time in banning child labor and empowering women in the workplace, noted Avicenna.  The discussion was lively and informative.

Ganesh informed us about the recent lecture he gave to students at a local school about Charles Darwin and his voyage in the Beagle.  This was for the occasion of Darwin’s birthday.  He shared interesting anecdotes from Darwin’s life that he came across.  During the talk Ganesh concentrated mostly on the life of Charles Darwin rather than delving deeply into the Theory of Evolution.  However the topic of evolution was so fascinating that the students couldn’t resist asking about it during question time.  It was an hour long talk and the students, mostly from 8th standard, listened attentively.  He has promised to share the video of his talk once available.  It will be appended to this report.

Olga brought up the topic of marital rape, in which according to a recent judgement, rape can occur only between non-married couples.  It is difficult for many who are brought up in a patriarchal society to even understand the concept of consent, let along consent among married couples.  She noted the difficulties in getting a rapist convicted and pointed out that even if a husband walked into a police station and admitted that he just raped his wife, he would simply be laughed off. 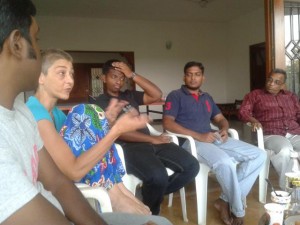 Madhavan was of the opinion that financial independence is the main pathway for women to break free of their social shackles.  Whenever a husband buys a house or property it should be co-registered with his wife, suggested Madhavan. Avicenna recalled a news from Spain where MPs have drawn up a marriage contract which obliges men to share household chores and care for the children.

Madhavan asked why many people find it difficult to say “I don’t know” when asked about the question of god’s existence.   For instance if we ask a person what the capital of some obscure country is, they may not hesitate to say “I don’t know” and yet when we ask them about god, even though they may not know, they are sure that god exists.  Also when it comes to money, an average person would examine any financial plan thoroughly before investing his/her money in order to make sure they get good returns.  Yet, when it comes to god they are willing to throw money away without looking at the track record.  Madhavan wondered if this was due to how our brain has evolved over the millennia. 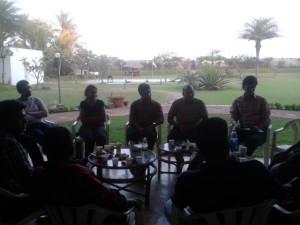 The next meet will be announced on our facebook page and under the Freethought events tab in the homepage.