Pranab Mukherjee, the country’s present president, mentioned at the Indian Science Congress of 2012 that “Another Nobel Prize in the sciences is long overdue for India.”

Now this claim is by no means unreasonable. But if we are to go by the present scenario of ‘scientific temper’ in India, which the Indian Science Congress boasts as its guiding ideal, it looks as if they have their work cut out for them. 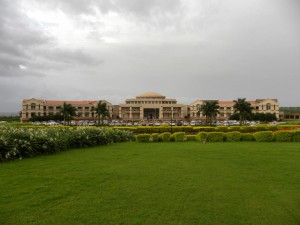 I am a proud sophomore student of BITS-Pilani, Goa. Like most students of BITS-Pilani, Goa, I always look forward to good food, a day well spent with friends, and the simply lovely Goan climate (especially during winter). Additionally, I am also a very big fan of freethinking, and the rational worldview.

And that’s why I’m going to talk about something that’s been a thorn in my side for over a year.

The offending party in question is the ‘Divine Vedic Youth Association’, a student’s organisation affiliated with ISKCON.

I first noticed this student’s organisation back in my first year, when I read a plain notice put up by them that detailed a series of seminars to be held. The second in this series caught my attention. “Does God exist?” was the topic for this session.

Now, I was, at that particular point of time, relatively aloof and distant from the heated battle-ground that atheists and the pious fence upon. I was what one could call the ‘Inoffensive atheist’. I would say that I didn’t believe in God, and promptly leave it at that, without any desire to argue or defend my position. Naturally, therefore, I passed off the invitation to ponder on this big question. At the behest of a friend though, I finally decided to go.

The seminar began with the speaker glibly mentioning his CGPA: 9.2. He then went on to introduce his other friends, with similar 9+ CGPAs. I thought this rather odd, because, while commendable, their CGPAs didn’t have anything to do with the existence of God.

He then began the presentation.

The speaker showed us a slide that had an image of Lord Krishna. Juxtaposed with it was a diagram of the electromagnetic spectrum, with the visible range indicated. He made the following comparison: “Just as the human eye is incapable of seeing all the other EM waves outside the visible range, so too is the human mind incapable of recognizing the omnipotent energy of God.”

He then went on to arrogantly claim that Darwinian evolution is false, citing the apparent lack of fossil evidence (I’m serious!) and the fact that all (yes! All!!) available fossil evidence that suggests that humans are an evolved species is fake. But his criticism of the Big Bang theory takes the cake. He said: “We all know that it is impossible for a car that explodes to yield two cars. How then, can an explosion have created the entire universe?”

I was yet to recover from this assault on the senses when he continued with his pathetic diatribe: “Look at this rose. It is very beautiful. Clearly it is a natural creation, and something like this couldn’t possibly have come into existence at random. It must therefore have been created by an intelligent designer.” Then came the usual creationist checklist: “Have you seen a building without a builder? Have you seen a watch without a maker…?”

A story he recounted was as follows: “One day, a man passed by a patch of water melons. He wondered why they grew on the ground, and then sat under a lemon tree for a nap. A lemon fell on his head, waking him from his slumber. His eyes opened, and then his ‘inner eye’ also opened, and he realised the answer to his question.” Apparently, according to the speaker, melons don’t grow on trees because otherwise the fellow in the story could have had a serious injury. And thus there are laws by which this universe operates. I ventured the question: “Why then, do coconuts grow on trees?” And to my immense surprise, out came the answer, “Because that is the law of this world, and we cannot wish for it to be otherwise.”

They then played a video that implored the viewers to recognise God’s good intentions in bestowing upon humanity fruits with skins to protect them, and sweetness that humans can savour.

The final bit included various misquotations of a number of prominent figures in science, from Issac Newton, who apparently read the Bhagvad Gita and thereby understood the gyroscope, to Einstein. Misquoting Einstein is a staple for the godly and pious, and I wasn’t surprised.

But what really worried me was not this credulous garbage that was inflicted upon the 40-strong listeners in the classroom, but the fact that practically no one bothered to question their delusions throughout the entire seminar. There was not a single voice of protest or inquiry, not a single demand for evidence or references. Nothing. These people had already been won over, because the speaker appealed not to their sense of reason, but their fear of failure. He asked how many people were worried about their grades, and went on to sell his religious fervour and supposed ‘knowledge’ as a mantra for success. Indeed, the other seminars in their schedule were all about how to absolve oneself of fear and focus on studying. A noble effort, perhaps, but I think not.

Preying on the insecurities of first-year students was their real weapon. And they were doing it year after year, I later realised. Grabbing hold of people who are emotionally vulnerable to pernicious suggestion in the competitive environment of an institution such as BITS is the tragic consequence of a society that de-emphasizes in-depth understanding of core ideas in science in favour of a superficial, result-oriented model that ultimately serves no purpose in developing constructive and rational thinking.

The question naturally comes up: why in the world is pseudoscience still present in our institutions? I’m going to attempt to answer this question.

BITS-Pilani’s punchline is “Innovate, Achieve and Lead”. Fair enough. That sounds just about right, except for one small thing. It’s simply not enough.

All our technical universities seem to have one thing in common: their constant refrain to us to be ‘successful’. Be it the IITs, BITS or of course, the myriad others, anyone observant enough can make out that ‘success’ is the buzzword. ‘Achievement’ is a virtue, and dreams of 50 Lakh p.a. starting salaries seem to be the bench mark of the student who has ‘used his time wisely and worked hard’. And somehow, somewhere down the line, the real point of it all seems to have been lost.

It is simply not enough that universities exhort their students to make something of themselves. It is not enough that they churn out well-educated young professionals who still seek solace in astrology, continue to hold conflicting views about the universe in the face of scientific evidence, and continue to cling to crippling fears and insecurities about themselves and their purpose in life.

The cat is already out of the closet, and it’s becoming increasingly clear that a spurious understanding of science can co-exist with academic brilliance in higher education. If we are to really get anywhere to begin with, we must shed our collective cultural tolerance for faith-supremacy and stop riding on the popular bandwagon of Appeal to Antiquity. This manifestation of Karmic Capitalism comes at the cost of the rational worldview, and feeds off modern insecurity. It festers in a vacuum of discourse and open debate about what it means to be successful, or how we can overcome our anxieties thoughtfully.

Apart from the punch line, BITS subscribes to the motto “Knowledge is power supreme”. I like it. It’s simple and it’s true. And it’s what we need more than ever. Our emphasis needs to shift from the necessary but insufficient “Innovate, Achieve, Lead” to a culture where critical thinking trumps faith-supremacy, where the march to prosperity is complemented by freedom from ignorance, and where our institutions can operate without the interference of pseudoscience and superstition.