This photo-essay was originally published on the author’s blog, Different Strokes. We’re very pleased to be able to republish it here on Nirmukta. It complements an earlier photo-essay on Nirmukta titled No Country for Wheelchairs – while the earlier piece is an account of the lack of universal design – what is – this piece is an important reminder of what can be, if we as a society decide that it is a worthwhile goal. -Editors

After my slightly negative post of last week, I thought I should write something positive. One thing which aided me no small amount in this search for positivity was the week-end I spent with my old college friend at a place called Timbaktu (about a third of the way along the highway from Bangalore to Hyderabad). He spends such time as he is in India in this truly idyllic place – the closest thing to a Walden in today’s world. There is electricity only for very limited periods of the day, no telecom coverage, so no cell phones or internet! Scary or heavenly, depending on your view-point.

I have had occasion in the past to write about this blind friend Venky, who, not very surprisingly, has an amazing sensitivity to the possible problems `different’ people may face. He has built this simple house which has a verandah running all around it, with just two little rooms, a bathroom, and a miniscule kitchen (which my wheelchair cannot enter, on which score I should pick a bone with him!) The first sight of this house is so heart-warming  that I had to click a photograph of it on my inept little phone.  I reproduce that photograph here to show you why the mere sight of it drove me to tears. The big ramp in front was almost like a giant `welcome’ mat laid out especially for me! 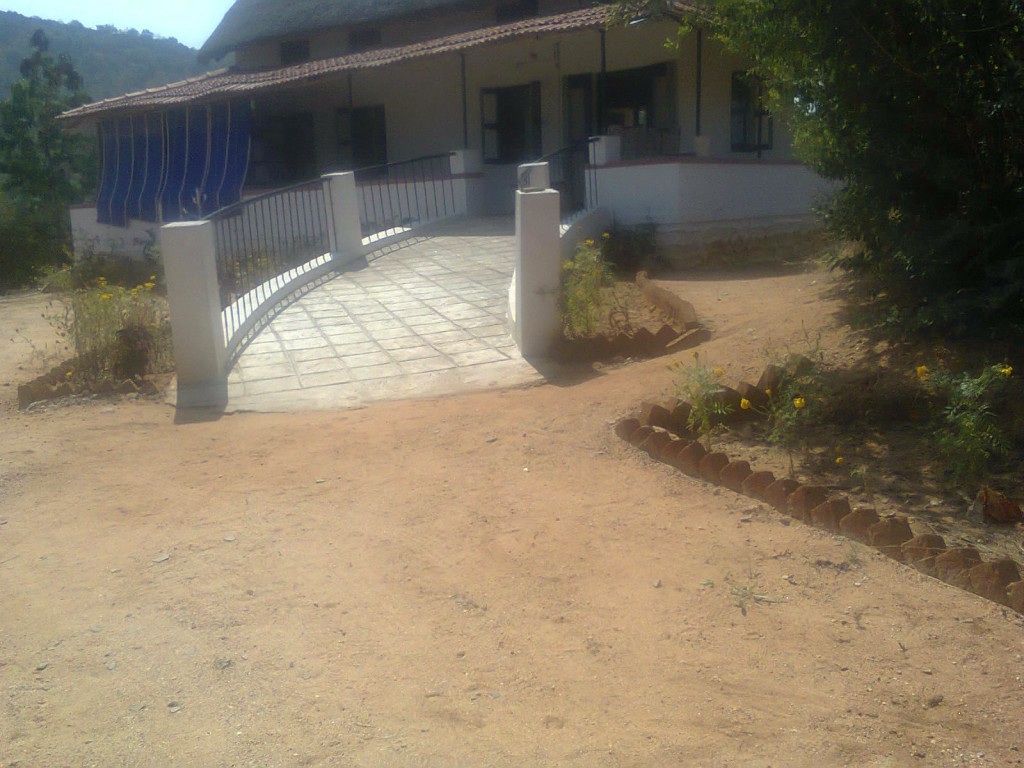 An idyllic single-story house, with a long curving ramp that leads up to a covered verandah.

Having started on the theme of places having been rendered accessible to the likes of me, let me continue by showing how wonderfully accessible my institute has been transformed by our wonderful administrators. I shall put in a bunch of photographs which are listed more or less in the order in which I encounter each of these places almost every day, along with a small attendant explanation/narration.

To start with, my own apartment complex is not very friendly to my wheelchair; for instance, the lift is too small; the only way I can get in is to remove the foot-pedals. So I leave my wheelchair in my institute. 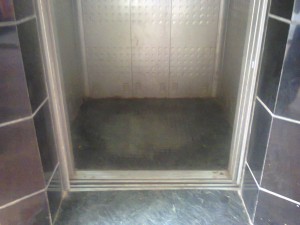 A narrow lift carriage with its door open.

But once I get to the institute and hobble my way from the car to my office, I have my wheel-chair to carry me around. To start with, I can get into the lift, and in fact, three more people can get in by my side too! 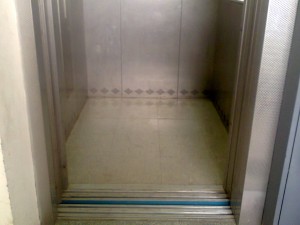 Another lift carriage, wider than the earlier one.

And my next potentially problematic venture is having to go across the road to the institute canteen for lunch. When construction on this building which houses my office (on the second floor) began, I noticed the few steps that had to be climbed before getting to the elevator. At that time, I used to walk fine but knew I had MS. So partly out of self-preservation and partly on general principles, I used the fact that I was on the `building works committee’ and insisted that the only elevator in the institute should be accessible via a ramp; and so the few feet that had already been built was demolished and the necessary ramp incorporated. 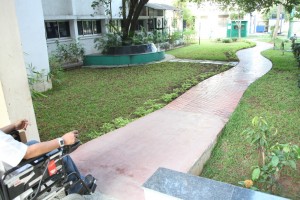 The author in his wheelchair, poised at the start of a downwards ramp that leads onto a long snaking path. There is lush grass and the institute’s buildings on either side.

So when I get down from the elevator, I have this nice ramp to go down. The path between the library building and the admin building used to be one of those artsy affairs with alternate strips of concrete and grass. and there were two gazebos on either side which provided pleasant venues for formal scientific discussions among small groups. When I saw the first of these, with the inevitable steps, I went and screamed `bloody murder’ to my director, and he promised to at least make the second of the gazebos accessible. And sure enough, the second gazebo is accessible now and the path from the library to the admin. building is painlessly smooth to drive my wheelchair on now. 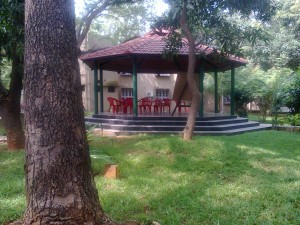 The first gazebo, which has four steps all around and is hence inaccessible. 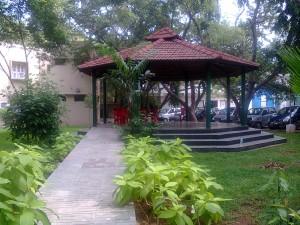 The second gazebo, which has a raised pathway leading straight onto it. On the right is a small car park, and on the left are some institute buildings. 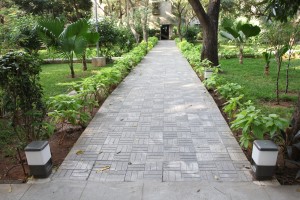 But by far the piece de resistance along these lines involves the entrances to the admin building as well as the auditorium in the institute, which had both initially had two or three steps from the road level to the floor level inside the buildings. I am indebted to my friend Simon, a physicist in my institute, for this innovative and aesthetically pleasing alternative to a separate ugly ramp on the side of the steps: 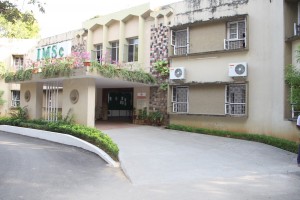 A very broad, gently curving ramp forms the approach to the entrance to the admin building. A large sign announcing the name of the institute can be seen on top of the covered entrance. 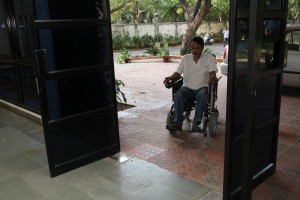 The author rolling into the building housing the auditorium, as seen from inside. Behind him is the approach ramp for the building.

Rather than making this post unduly long, let me just conclude with a few more photographs on how the guest house and canteen were turned accessible: 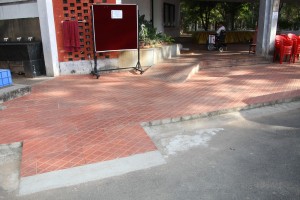 The patio outside the guest house. In the centre is a ramp leading up to where the author is, looking back. On the extreme left, the handwash area can be seen. 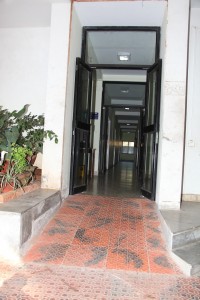 A close-up of a doorway leading into the ground floor of the guest house. 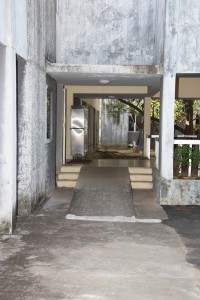 The ramp leading up to the sit-out outside the canteen.

It is because I do not see why other people with disabilities cannot also be as fortunate as I, to be able to work without difficulty and in dignity, that I began this campaign of writing on such issues! But my institute still `owes me’ a few things:

(a) at least one wheel-chair accessible toilet in the campus – preferably quite a few on the ground floor of the guest house!
(b) a lift to be able to get up to the director’s room and to the Chandrasekhar Hall; and
(b) some ramp or lift to enable me to get on to the `stage’ in our Ramanujan auditorium!

You can be sure I’ll keep harping on this and not allow them any peace till I have finally succeed in having helped create a completely accessible institution.