The third is the ‘weak nuclear’ interaction. It is operative, for example, inside the nuclei of radioactive materials, and is responsible for the emission of alpha-particles, beta-particles, etc. from inside such nuclei.

Lastly we have the ‘strong nuclear’ interaction, which is very strong but very short-ranged, and is responsible for the large binding energies of nuclei: A rather large amount of energy is required for extracting a proton or a neutron from inside the nucleus of an atom.

Maxwell’s theory of the electromagnetic interaction was a classical theory. So also was Einstein’s theory of the gravitational interaction, namely the general theory of relativity. Quantum effects become very significant at sub-atomic length scales. Moreover, the early universe (at and immediately after the Big Bang) was also of very small dimensions. We therefore need a quantum formulation for all the four interactions.

In quantum theory, not only are the elementary particles quanta of mass/energy, even the force fields or interactions among the particles are mediated by quanta. For example, when two electrons interact, the fundamental particle which mediates the interaction is the photon. One electron emits a (‘virtual’) photon and recoils in the process. The other electron absorbs the photon and also recoils. This back and forth exchange of photons constitutes the electromagnetic interaction. Quantum field theories have to be formulated for all the four interactions.

Historically, the electromagnetic interaction was the first to be cast in a quantum-mechanical form, and this subject goes by the name of quantum electrodynamics (QED). Richard Feynman, who played a major role in the development of QED, had also formulated a sum-over-histories version of quantum mechanics (see Part 4). He used his famous path-integrals for working out the details of QED. But the QED theory ran into a conceptual problem. The summation over the infinitely many possible histories resulted in an infinite mass and charge for the electron, which was an absurd result. Feynman got over this problem by a procedure called renormalization, but I shall not go into its technical details here.

Why are there four different fundamental interactions, and not just one? The fact is that there was indeed only one interaction to start with, but as the universe expanded and cooled, symmetry-breaking transitions occurred, resulting in the successive appearance of different and less symmetric interactions. Attempts continue to be made for ‘unifying’ the four interactions to see what kind of a theory emerges when this has been achieved. Such efforts run parallel to those for obtaining quantum-field-theoretic formulations for the four interactions.

The first to be unified were the electromagnetic interaction and the weak-nuclear interaction, resulting in what is called the electroweak interaction. A bonus point of this unification was that the renormalization procedure could be successfully carried out for the unified interaction for obtaining its quantum field theory (without encountering the ‘infinities’ problem mentioned above), whereas it was not achievable for the weak interaction separately.

The quantum field theory which successfully achieved renormalization for the quantum version of the strong nuclear interaction is called quantum chromodynamics (QCD). In this theory the proton and the neutron, as also some other particles, are envisioned as made up of a more fundamental set of particles called quarks. Quarks come in three ‘colours’ (nothing to do with the usual meaning of colour): red, green, and blue, along with the respective ‘anticolours’. The quarks cannot exist as free, stable particles. Only those combinations of them can exist as free particles which do not have a net colour. For example, a colour and its anticolour cancel, giving a neutral net colour. Composite particles in which this occurs are the particles called mesons. 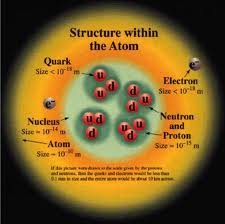 A total unification of all the four interaction was a distant dream till recently. Now ‘string theory’ and ‘M-theory’ have emerged as solutions to some of the pending problems in particle physics and cosmology. I shall discuss them in a future post.