Einstein’s special theory of relativity (cf. Part 10) was followed by his general theory of relativity (1907-1915), which addresses the issue of gravity. He showed that, contrary to Newton’s assumption, gravitational waves, which mediate gravitational attraction between any two bodies, travel at a finite speed, namely the speed of light. The theory explained gravitational interaction in terms of a DISTORTION OF SPACETIME by every object. The larger the mass of an object, the more is this distortion. When one object distorts spacetime, the effect is felt by every other object; this is how gravitational attraction between any two objects occurs.

Newton’s second law of motion says that the acceleration (a) produced by a force F acting on an object of mass m is equal to F/m; i.e., F = ma. The mass m that enters this equation is called the ‘inertial’ mass. To understand why, let us recall Newton’s first law of motion, which says that a body continues to be in a state of rest or uniform motion, unless acted upon by a force. Thus, the body exhibits inertia to any change of its state of rest or uniform motion; it resists a change in its state, and the resistance or inertia is proportional to its mass, the ‘inertial’ mass.

The big question was: Is inertial mass the same as gravitational mass? Newton (and also Galileo) asserted that it is so, and that it is a happy coincidence that it is so. Einstein agreed that the two kinds of mass are the same, but he created a trail-blazing theory of gravity out of this ‘happy coincidence’, namely the general theory of relativity. The sameness or equivalence of the two kinds of mass goes by the name of EQUIVALENCE PRINCIPLE, an essential ingredient of Einstein’s theory.

Einstein argued that the experience of being pulled downwards by the gravitational force on the surface of the Earth is equivalent to being inside a spaceship (far from any sources of gravity) that is being accelerated by its engines.

When an observer detects the local presence of a force that acts on all objects in proportion to the inertial mass of the object, the observer can be taken to be experiencing an accelerated frame of reference. Imagine two reference frames, K and K’. K has a uniform gravitational field, whereas K’ has no gravitational field but is uniformly accelerated by such an amount that objects in the two frames experience identical forces:

‘We arrive at a very satisfactory interpretation of this law of experience, if we assume that the systems K and K’ are physically exactly equivalent; that is, if we assume that we may just as well regard the system K as being in a space free from gravitational fields, if we then regard K as uniformly accelerated. This assumption of exact physical equivalence makes it impossible for us to speak of the absolute acceleration of the system of reference, just as the usual (i.e. special) theory of relativity forbids us to talk of the absolute velocity of a system; and it makes the equal falling of all bodies in a gravitational field seem a matter of course’ (Einstein 1911).

Einstein went further than that:

‘As long as we restrict ourselves to purely mechanical processes in the realm where Newton’s mechanics holds sway, we are certain of the equivalence of the systems K and K’. But this view of ours will not have any deeper significance unless the systems K and K’ are equivalent with respect to all physical processes, that is, unless the laws of Nature with respect to K are in entire agreement with those with respect to K’. By assuming this to be so, we arrive at a principle which, if it is really true, has great heuristic importance. For by theoretical consideration of processes which take place relatively to a system of reference with uniform acceleration, we obtain information as to the career of processes in a homogeneous gravitational field’ (Einstein, 1911). 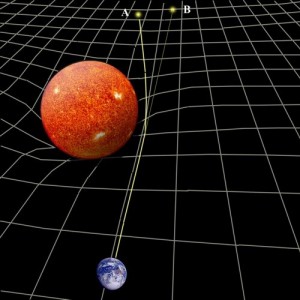 The central idea of Einstein’s theory is that the presence of matter distorts or curves spacetime. Thus gravity is interpreted as not a force, but rather a curvature in the fabric of spacetime, and objects respond to gravity by following (or free-falling along) the curvature of spacetime in the vicinity of an object. This idea has shaped modern cosmology. It also marked a major inroad of geometry into physics.

This video by Richard Feynman (on the character of physical law) is a treat to watch: 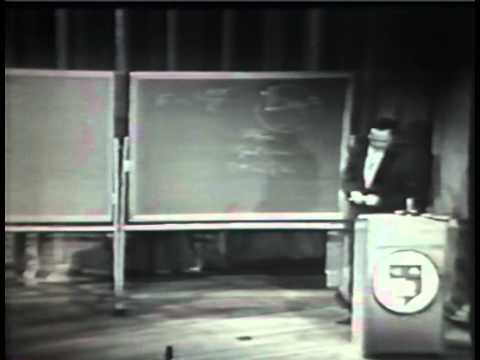